So one of the most important pieces of paperwork on my railroad, and one that most other layouts don't need, is the Daily Check of Cars.

The railroad, of course, operates to make a profit (hopefully) and for freight that happens in three primary ways. The first is the charges collected for actually moving the freight. This is basically the same thing as the price paid to ship via UPS, FedEx or the USPS.

This, of course, is a primary business of the railroad, and for most roads through history comprised more than 50% of the railroad's revenue. The New Haven was unusual in that passenger traffic, much of it related to commuting to NYC or Boston, was a significant part of the railroad's revenue. Another reason, though, was the nature of the NH's freight business, since they returned a significant portion of foreign cars empty. That is, there wasn't enough originating freight business to fill the cars emptied at their destinations. The have to pay the expense of moving such cars off of the railroad, but don't derive any income from an empty car. Furthermore, they have to pay a per diem daily rate for any foreign car on the road after midnight. So the goal is to get empty cars off of the railroad as quickly as possible.

While the NH is paid a per diem charge on each of their cars that is on another road, car routing rules require that foreign cars must be given priority loading over home road cars for destinations off of the home road. While the amount of compliance varied over the years, it did mean that many roads like the NH had relatively small rosters (about 10,000 cars) because they always had a surplus of foreign road empties to fill.

The railroads offset the per diem charges with a demurrage charge. When a load or empty is delivered to an industry, they have 24 hours to load or empty the car. After 24 hours, they are charged a demurrage fee. In part this is to offset the per diem charges that the railroad will pay. But they were also in place because industries found that freight cars made good temporary warehouses, rather than building or renting such space elsewhere. Even with the demurrage fees this was an issue, because they were still considerably cheaper than the cost of warehousing elsewhere. The container business today embraces this business model, and by separating the car that moves the container with the container itself, the railroad doesn't find itself with a car shortage as often happened in the past.

Anyway, I have two NH forms that are designed to address tracking the cars that are located within a town (station): 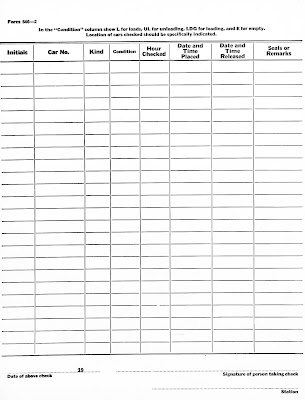 The first is form 546-2, The Daily Yard Check. I got this page from George Ford, a former operator/agent on the New Haven. So I know it's a New Haven form, even though it has no railroad information. This is clearly a report to record when each car is delivered and released from the station. 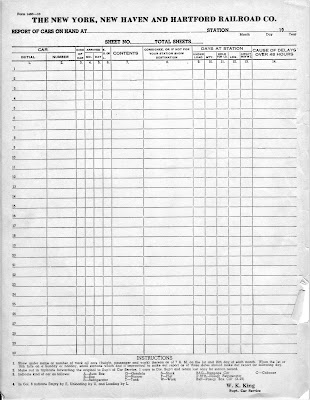 This has instructions at the bottom, that records all of the cars on hand on the 1st and 16th of the month, which is to be forwarded to the Car Service Department. At the time, of course, all car movements were recorded by hand and reported daily so the Accounting Department could report for per diems.

The information on both is similar, but you can see on the second report that the Car Service Department is particularly interested in cars that have been on the railroad for more than 48 hours. Of course, a report filed twice a month won't be used for accounting purposes, and this report isn't provided to the Accounting Department. I think it was used in much the same manner as the national 1% waybill sample, to find patterns and ways to improve the efficiency of the car movements. I don't recall right now where the statistic is, but I recall a report that indicated a freight car on the New Haven moved something like only 28 miles a day, on average.

Of course, on my layout I don't need to report to the accounting or car service departments. But I do have an agent that needs to know what cars are on hand in town, and which cars are ready to be picked up. Joseph has confirmed that the same type of report is still filled out today, at the end of the work day, ready to start the next work day.

And I was just able to get a book of the Daily Yard Check (546-2) and it's quite interesting. First, I got the title of the form from another booklet. But the actual title is the "Daily Check of Cars at..." 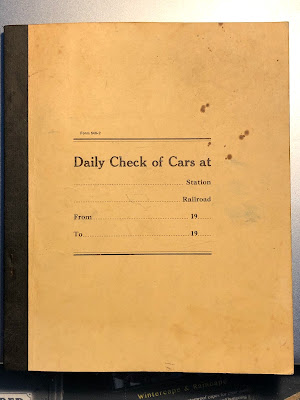 As you can see, there is still no New Haven name on it. In fact, it has a space to fill in the specific railroad. It's the same form, and the same form number as the individual sheet I already had.

It also provides the instructions on the inside cover: 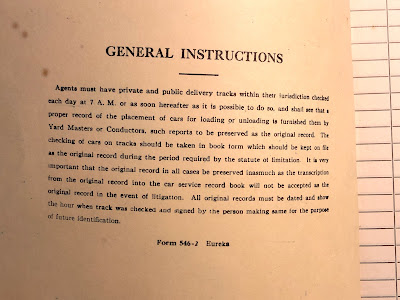 Now you can see that this is to be done by 7:00 am, or as close to it as possible. But I think that since the switching crew was a one-shift job, that might have been done at the end of the work day, as Joseph said it is still done now.

But it does provide some interesting possibilities. First is that it takes the Agent 10-15 minutes to get settled and start providing work for the switching crews, maybe a little longer. In addition, the Daily Check of Cars isn't needed until after the inbound cars, especially the priority moves, are addressed first. That is, the Agent writes out switch lists for these cars so the crew can start sorting them, and deliver the priority cars right away.

One option, then, would be to have operators first take the job as a clerk, and fill out forms to be provided to the Agent about the cars on hand. A benefit of this approach is that the operators (who will soon be the switching crews) will also get a lay of the land, learn where the industries are, and see what work to expect during the day. By the time they finish that, the Agent will have work for them, and can then take those lists and compile them into the Daily Check of Cars, as the real Agents did.

Was this how it was done? Well, in New Britain it appears the Agent was on duty at 5:15 am, so the clerks could be busy compiling that report for the 7:00 am deadline. In the meantime, the Agent would have had time to get switch lists prepared for the cars left overnight. I don't know what time the crews started, although I know the first trick on the New Haven was 7:00-3:00. I'm trying to dig up more information about when the Freight House opened as well. This matters because it will need empties to load, probably before they open. Empties would be requested from the Card Service Department, and presumably be delivered overnight.

As I noted before, there is a pattern to the way freight moves on the railroad. It's quite efficient, and is done the same way pretty much every day. So would the report be completed at the end of the Agent's day, which in New Britain was 9:00 pm, or first thing in the morning? What time do the crews start? Do they start at the same time, or are the two crews staggered?

These need to work with the realities of operating a model railroad too. Most crews probably don't want to wait too long before they get to start operating. For example, if the two switch crews are on different schedules, and the second crew doesn't start until noon, but the session starts at 7:00 am, then I need to find something for the crew to do for an hour an 15 minutes while waiting for their job to start. So being a station clerk might work well.

Most likely the Daily Check of Cars was not used by the Agent for car movements. They have the waybills and Home Route cards that come in with the trains, and, while I haven't located New Haven forms yet, there must have been one for recording requests for empty cars, and also a process to release cars from an industry.

Part of the art of designing a model railroad operating session is in condensing the processes, paperwork, and people into something more manageable, and also something that ultimately translates into moving cars around the layout. But by learning how the railroad actually operates, rather than designing the processes for my operating sessions around other model railroad operation schemes, I can more closely follow the prototype, and also choose what compromises or changes work best for us.
Posted by Randy at 2:19 PM