As further proof that I inflict the same things upon myself as my modeling buddies...

All of Stanley Works and the rest of the left side of the layout has been pulled up. And I've pulled out the backdrop. This has been operating well for probably 5 years now.... 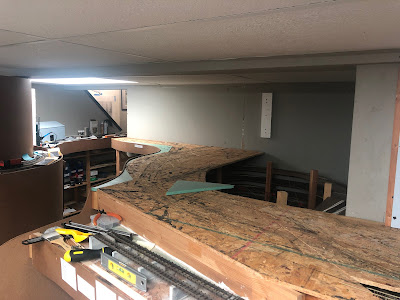 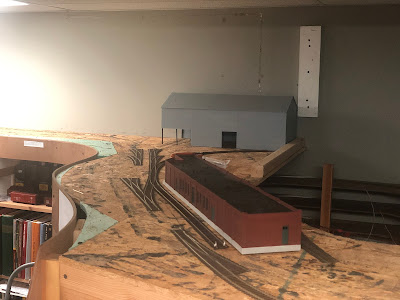 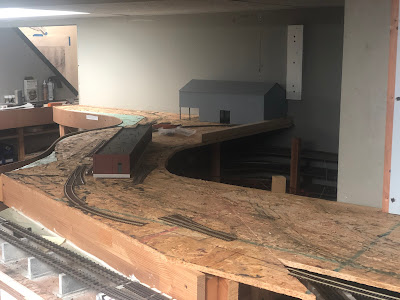 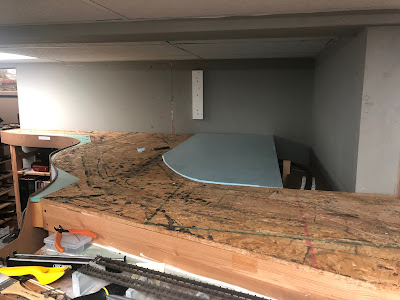 There are a few mockups for testing, but in the last photo you can see some of what I'm planning. I'd like a little more space (and a better-shaped space) for modeling Stanley Works. Most of that blue foam will be cut away in the middle, but the empty space to the right of it will be covered. It will leave an access pit about half the size of the inside of the helix. I'll be able to hide the pit with structures, and I'll also be able to put further structures around the far edge of the pit where the backdrop will be if I want to. I've found that where possible, the most effective backdrop (like one section on Jim Dufour's layout), is to have the backdrop separated from the layout with an empty space between them. The only two places I'll be able to do this is in the helix, but it will work well. In both places it will also allow more scenery on the railroad itself, and access from within the helix.

In addition, it provides a significant alteration in operations at Stanley Works. I'll try to explain it with this diagram: 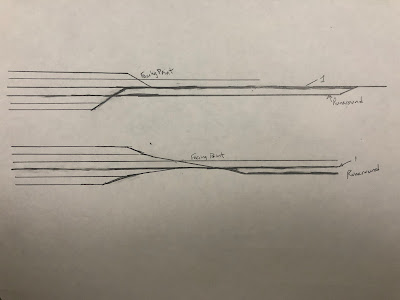 The basic arrangement is on the top. When we changed the alignment a few years ago, we extended the runaround as far as we could. But because of the arrangement, it created two sections of working track, with essentially two yard leads. The three tracks on top use use the track labeled as #1, and the lower three tracks use the runaround as the lead.

What has complicated this arrangement is learning more about the actual arrangement, for example in this Thomas Airviews 1955 aerial photo: 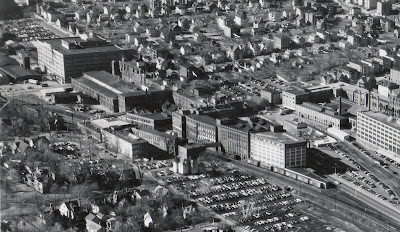 The box cars along the building are on what is labeled as Track #1 in my diagram. The runaround is immediately next to it. Now my layout is much shorter, but if there are box cars spotted along buildings on Track #1, it cannot be a yard lead as well. Moving the end of the runaround to the right, as in the second diagram, it functions as a yard lead for all of the tracks at that end of Stanley Works.

Is it prototypical? As much as it can be. The reality is that there isn't a collection of tracks that looks like a stub-ended yard. Instead the track continues through the rolling mill, and the additional tracks are across Curtis Street. That doesn't fit, so instead the tracks are represented on the shelf to the left. Operationally they will function a lot like the prototype, though. The main difference being that you won't have to move any cars that are being loaded/unloaded in the rolling mill to get to them.

Another interesting consideration is that since Track #1 is usually occupied by cars, they will have to be moved in order to use the runaround to service the (prototypically accurate) single facing point switch in the complex.

In any event, reworking this area will add about a half-dozen more spotting locations, make the operations work better, and it's easy to do using the Microengineering Yard Ladder system (which is now available in Code 70).
Posted by Randy at 8:01 PM