A Little at a Time

Subtitled: You Don't Have to do Everything at Once
Alternately Subtitled: It Will All Get Done Eventually

I've probably mentioned it before, but I've been telling people I'm a "proof of concept guy." That is, once I work my way through a problem or challenge to the point where I know it can be done, I tend to move onto the next thing. So I have a lot of "next things" in progress (which I think drives Chris crazy).

For example, one week I decided I needed single sheathed box cars on the railroad to better represent the prototypical mix of cars in my era. So I pulled out all of my single sheathed box car kits at the time. Most of them were flat resin kits, so I assembled the kits and cleaned up the castings of the one-piece body kits. Then I drilled all of the holes on all of the cars for grab irons.

That was quick and easy because I had gotten a new cordless Dremel Stylus at the time. While Chris has a fancy footpedal to control the speed of his, I found that the torque is low enough on this model that I can just put my finger on the chuck to slow or stop it.

Anyway, since that was going so well, I pulled out all of the double sheathed box cars I had too. I started installing grab irons after that, and then something came up and they've been waiting for me to get back to them. Part of the issue is that I'll get to a certain point where I need to do some research, or develop a skill better, etc.

Another thing that happens is that I'll either come across some information I didn't have before, or a model will be released that I'll need, which also leads to more research, and then I'll figure out what I need to change or update, and new projects sprout. That happened from several different directions with hoppers. I was busy researching coal deliveries for Household Fuel, which led to coal deliveries for the city (that will be another post in the future) which pointed me to particular railroads, and then researching to see what models are available for those.

One of them was the LNE hopper. So Chris, Pete and I decided to do a group project, where we could each play to our strengths, and complete our roster of those cars. At the same time, I had gotten information on the CNJ/RDG welded hoppers and those became part of my plans for the project. I had also decided that I wanted to settle on the MTH USRA hopper, and got a good deal on those. Aside from those, I picked up what I needed from F&C's excellent one-piece body resin kits of a slew of B&O and PRR hoppers that Steve has been producing over the last few years.

Of course, once those are home, I want to take a look at them, and then start cleaning flash, drilling holes, install a few grabs...

You can see where this is going. I've now got a bunch of hoppers partially done on a shelf under the box cars (and gondolas and flat cars...). 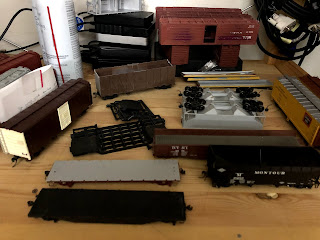 LNE hoppers, and the Montour car is there for comparison.
CVMW, Owl Mountain and ECW flat cars.
Rib Side Cars Milwaukee box cars to rework.
An SP 12-panel box car with resin ends and door acquired from eBay.
A war emergency single sheathed box car shortened by 6" for one of several prototypes.
Bits and pieces plus two Intermountain FGEX cars.
P2k DT&I gondola to get the same interior treatment as the shorter Speedwitch kit. 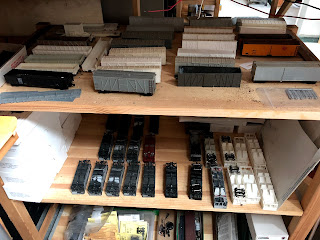 (Mostly resin) Gondolas, single sheathed and double sheathed box cars on the top.
A mix of MTH, Atlas, Westerfield, and F&C hoppers on the bottom. 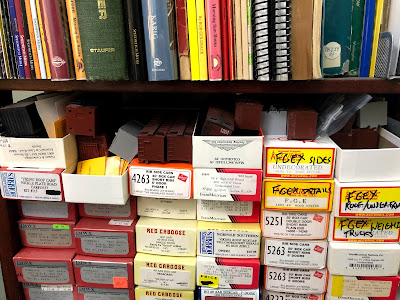 A variety of things, but most of the visible cars are the FGEX reefers.
The boxes are desprued IMWX, Red Caboose and Intermountain AAR box cars.

Then things get in the way, and stuff gets sidelined (work, family, trying to build a layout at the same time, etc.), and the projects wait. And then they often seem too large to pick up and start again.

Then I started working on the switch stands. They're kind of fun, but do get old after a little while. But it also showed me that with a few minutes here and there, I could get a lot done. So I pulled out my plastic box car kits and desprued everything. It went really quickly with the switch stands, and now those kits are ready to assemble more easily. And I've started on a few as well.

And it dawned on me. If I play to my "strengths" and just grab what's interesting and on hand at the time, I can make progress in small and large increments. And eventually all of these projects (and more) will be completed. When I was working on Harvey's layout, we would get a ton of work done in a 4, 6 or 8-hour shift. I can't always dedicate my time to that (and it did often feel like work, which it was), but over the course of a week I can easily spend that much time in between other things.

What I should really be working on (and it's what most of my modeling time is going to right now) is completing the layout itself. While scenery and structures are going to take longer, my goal in the next month or so is to get all of the track (new and old) fully operational.
Posted by Randy at 10:51 PM