A couple of years ago John Grosner passed along a switch stand he had. The thing is massive (I think I found that they weigh around 800 lbs).

A month or so ago, Joseph stopped by with some ties for the switch stand. After (mostly Joseph) attempted the first spike, we decided drilling a pilot hole was the way to go. I can't imagine how millions of ties were laid by hand.

He had previously found a set of targets for me, which I sanded, removed the reflective tape, and repainted with Rustoleum safety red, safety green and white.

Yesterday I collected some ballast from the (long-abandoned) track at Cook's Quarry to finish it off. 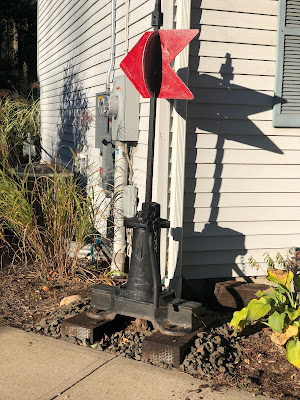 At some point I'll find a lantern that fits. Although it was common for the NH to use them without lanterns as well. I usually have folks enter the back for open houses and ops sessions, and it points the way. You can see how dark the NH trap rock is, also with a bit of brown. This is from the same basic location where I collect ballast for the layout.
Posted by Randy at 8:18 PM