This is the sort of work that I don't do nearly as well as I'd like, it's time consuming, takes me longer than it probably should, but it's got to get done.
I've been working on the sheet rock, the benchwork for the bulk tracks on the wall opposite Whiting St Yard, and painted the door New Haven #292 Warm Orange: 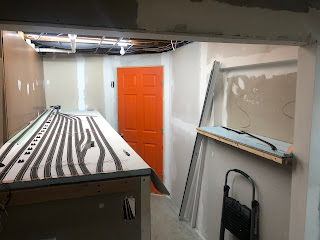 Like the rest of the basement, the walls will be New Haven #246 Silver Gray and the trim is New Haven #212 Hunter Green. I simply take the paint chips for the New Haven Color Guide (available from NHRHTA) and have Home Depot match the colors. Oddly, their machine was unable to match the Hunter Green this time.. Too dark they said. Fortunately, they had matched it for me 10 years ago, and I brought in a piece of trim that I had already painted and they were able to match that.

I'm also trying to engineer the swing bridge (my preference) or lift out to connect the bulk tracks to Whiting St Yard. I have the materials to install the grid for the drop ceiling too, so the room is coming together quite well, if slowly.

While the construction is continuing, I've also completed some more interesting projects. These go much faster...

As I noted in a prior post, I ran a new bus line all the way around the room to allow both parts of the Berlin Line to be in the same electrical block. The lift out is where the two sections meet, but I didn't want to make an electrical connection across the lift out since that would require plugging/unplugging wires to operate and it's across the only entrance/exit to the basement.

So I decided to figure out where I'd place the remaining circuit breakers, and rewire for those.

I had originally installed a switch to allow DCC or DC use, but now that I'm installing the PSX circuit breakers, it was time to finally remove the DC option. I mounted the circuit breakers for the main deck and the staging deck on the wall between the two. 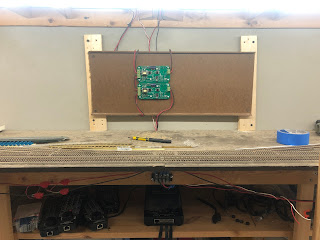 This seemed like the best place to keep it out of the way, but accessible. To do so I used some scrap 1" x 3" lumber drilled into the studs, so I could mount the boards to a piece of Masonite across those, leaving space behind the board for wires.

Fun fact: the piece of Masonite was the test piece to see if it would work for building the helix. I glued two small lips (3/4" strips of Masonite) to stiffen it, and brought it to the NE Proto Meet and showed it to Bill, who immediately said, "I know what that's for!" He agreed that it looked like it should work, and I moved on from there. In this case, it was a scrap piece just the right length to span this location.

The right outputs go to the upper deck (upper PSX), and staging deck (lower PSX). Very simple, actually, and mostly required repositioning the existing wiring and allowed me to eliminate the DC/DCC switch I had installed.

Behind the agent's desk are the PSX boards for Stanley Works (top) and Berlin Line (bottom): 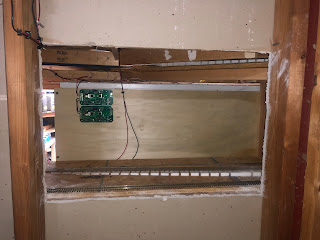 Access is through a window I cut in the utility room wall, which also provides better airflow to the furnace (which is needed). The input is the upper left, and the two boards are connected on the left. I haven't run the new Stanley Bus yet. The two wires to the left of the boards are the Berlin Line which will connect to the output of the lower PSX.
I tested them all, and power is flowing to the circuit breakers and not shorting. All of the feeders are ready to be soldered on the Berlin Line. I'm getting started drilling and pulling feeders for Stanley Works and the east and west sides of town. I'm also completing some track adjustments in staging.
To the left of the window the Berlin Line bus is connected to two terminal blocks, because I needed to run a bus to the three (!) different sections of the Berlin Line: 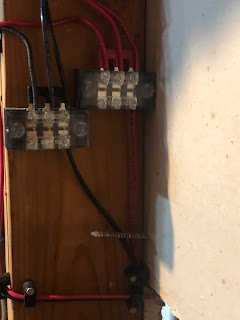 You can see that one of the bus lines goes back through the window, and then circles the entire room to get to the Berlin Line. The others connect to Whiting St Yard and the bulk tracks.
My initial plan was to separate the main line into its own circuit, but it's really not necessary. I still have to cut gaps for the different blocks as well. But I have 4 blocks now for short protection:
The goal is to largely isolate each crew electrically so that if one causes a short, it won't affect the other crews. There will be times when both switching crews are working parts of New Britain (I think), and two crews will operate in the same block for through trains. But for probably 80% of the session, each crew is isolated electrically.

Another project that has been a long time coming is to install fast clocks. I've looked at a number of options, but the key for me is that I wanted analog clocks. So I'm using the FCC4 by Mike Dodd. (He has a great website for his model of the Virginian too, although unfortunately it was dismantled when they moved. He is working on a new one.)
It's a pretty simple system. There's a controller, you can wire some switches for additional control to it, and then use modified quartz clock movements installed in cheap clocks. You can purchase the controller as a kit, and he also shows you how to modify the movements yourself, or you can buy them preassembled by Mike, which is what I did. I've had them for some time, and had a number of clocks ready to convert.
I installed the controller next to the PSX circuit breakers, and used a surface mount electrical box to house the switches. The upper left turns the power to the system on/off. The upper right starts and stops the clocks. The lower left is a fast forward switch (which causes them to run 17x faster than normal), and the push button resets all the clocks to your start time. There are dip switches on the circuit board to change the fast clock ratio, for now I have it set at 4:1, I might experiment with 3:1 as well. 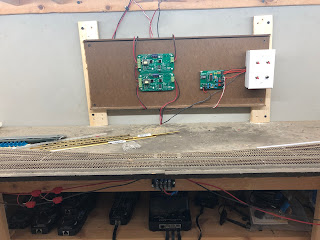 Right now I have one clock I built into the fascia at the station: 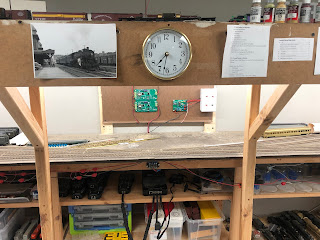 There's a second clock at the agent's desk: 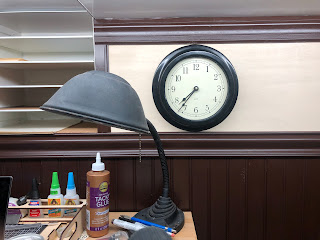 It also conveniently hides the seam between the two pieces of plywood.
I installed a larger wall clock next to where the phone will be at Whiting St. Yard: 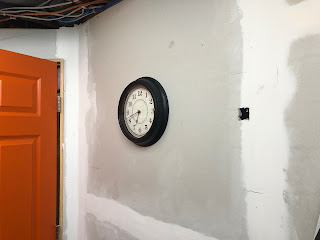 The square hole is where I'll run the wires behind the phone. This one is behind the door if it's open, but I don't anticipate having that door open during sessions unless somebody needs to go into staging for some reason.
I needed to order another movement and a couple of sets of hands. Once those arrive, I'll install one above the other desk, plus one in the center of the staging level. Basically I want at least one visible from all of the common operating locations. Since the staging will probably be behind a skirt/curtain, they'll need one. And if the crew is using the desk to work on paperwork, they'll have one right there as well.
The system supports up to 15 clocks. I have three of the smaller ones that I haven't used yet, and when we get to the next shakedown session I'll see if we need to put up a few more. I'm thinking that maybe I'll need one near Stanley Works, although they do have a clear view to the one at the station.
Posted by Randy at 1:46 PM