I finally have a desk big enough for my work! This has always been a challenge, since we have a relatively small house. It means that the workspace I've got is always doing double or triple duty, requiring me to move something I'm working on to make room for another.
Most of the time I have computer work to do, along with things I'm doing on paper, with books, etc., and of course I also like to be busy working on modeling things. I've always preferred a large desk, so with the reconfiguration of the Agent's workspace, I could finally install one.
The original plan was out of stock, although when I finally got a chance to look at the display pieces I was less than impressed. Rather than wait for the full solution, I could use the legs I had from Ikea for the old desk, and build the tabletop now. It's a solid core door cut to fit the space, and stained with an espresso stain, since the wainscot was spray painted espresso. 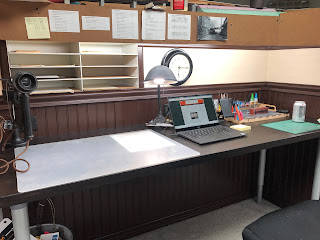 Although it may not always be evident, I do like to be organized. My problem tends to be that I work on too many things at once, combined with the fact that I don't have a place for everything to go while I do so. Now that we've made such great progress with the major construction in the basement, the stuff is all starting to have an actual home. Which means it can be quickly and easily moved out of the way when needed.
As you can see in the picture above, the desk is separated into work areas. The Agent's desk is intended to always be clear, for ops sessions. Between sessions, it's the actual desk space where I can work with paperwork, books, etc.
My computer, important for my work, now has a permanent place along with my phone in the middle. This lets me always have access while doing other things.
To the right is my modeling workstation. Whatever the current project is now has a place to stay, instead of me having to move it out of the way when I need to do other work.
My primary toolbox lives on top of a rolling cart that fits in the space just to the right of the desk, and next to where I've set up the modeling station. 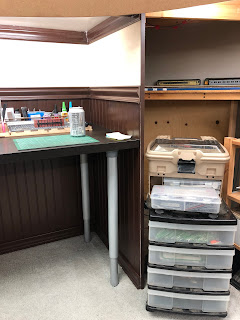 My favorite part about having a home for all of these things (and various in progress projects) is that I won't have to be constantly cleaning things up before I can get working on something. While working on the RS-2s I still had to move them out of the way frequently, and then get everything back out when I had the time to work on them. So this saves a lot of time and effort.
Another part of the design as planned are several brush plates to allow me to plug things in without having to install outlets in the Agent's office. 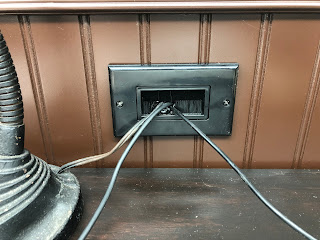 This way I can run several wires through to a power strip that is in the space behind the Agent's office. I did have to remove the end of the vintage lamp cord, since it didn't fit. But that was easy, two wires to unscrew then reattach after passing the wire through the wall. I installed three of them so I don't have any wires under the desk, or in the way on top.
I installed cork on the side wall to use as a bulletin board: 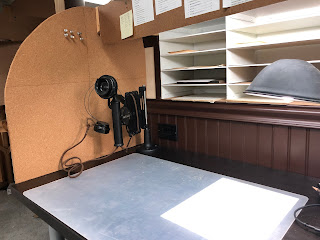 I haven't decided if I want to have anything under the desk anymore. The initial plan was for a small bookcase base that would point to the left aisle. But I've rearranged book storage, so that's not necessary right now. I'll probably look at some sort of rolling cart instead if I feel I really need it.
Now I need to work through the process of hooking up the vintage phone system and the Agent's office will be complete.
Another shout out to Chris, Dick and Pete, because this really wouldn't have gotten this far without them. Thanks!
Posted by Randy at 2:38 PM