Is it the Highland?

Last week I posted two photos of the Comet in an unknown location, but looks like it may be on the Highland somewere. The primary clue is the line poles on both sides of the track, and their configuration. The general topography and scenery also resembles some areas on the Highland as well. 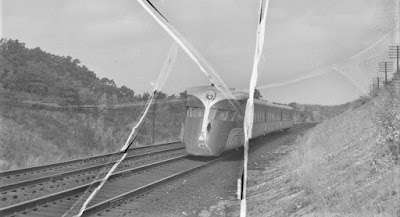 However, the double track configuration threw me, since this looks like it should be someplace west of Terryville Tunnel, and that was single tracked long before the Comet ran on the Highland Line.

I still don't know exactly where this is, but I no longer think they are on the Highland. I found some other pictures that look like the same location, and unfortunately all of these negatives are damaged. All appear to be Kent Cochrane photos. 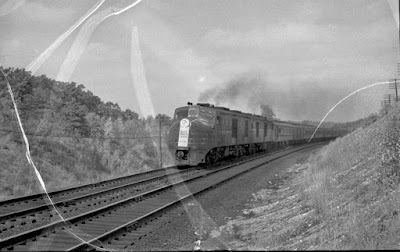 Here's a double-headed train led by DL-109 No. 741 in the same location with a good size passenger train. The first car is a combine, and I don't have any records of a combine, nor is there any reason for a pair of DL-109s to be running on the Highland in this era. 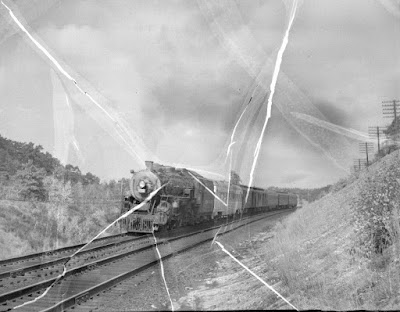 I-2 class 1312 with a short passenger train, with a stainless steel coach on the front. Again, no record of a stainless car ever running on the New Haven except. Bob Vancour pointed out the stainless car is probably dead-heading, since it's in front of the baggage cars. 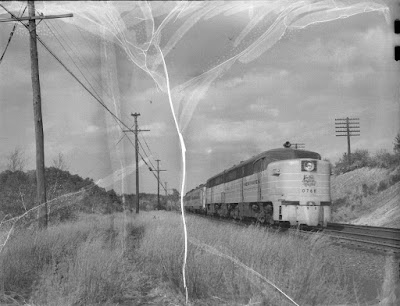 Lastly, here's a pair of PAs, led by 0768, again with stainless steel cars. I have no record of PAs running on the Highland, and in this era they were almost all assigned to Shoreline trains, including the most prestigious ones.

No dates on any of these, and they aren't necessarily all from the same day, although they could be. Only the first 10 PAs, delivered in 1948, wore the Hunter Green and Warm Orange pinstripe scheme, and were repainted in the early '50s to match the additional 17 delivered in 1949 in Pullman Green and Dulux Gold. I don't have any specifics on when that repaint happened, but the last photo is most likely c1949-51(?).

Without anything else to go by, the best guess right now is that this was on the Shoreline, someplace in Rhode Island. If you can identify it more precisely, let me know!