It should be clear by now that I enjoy researching the railroad probably as much as I enjoy modeling it. For me it's not just about uncovering information, but also understanding it. Putting together the pieces to get a better picture of the whole. It's much like solving mysteries.

Since historical information is sometimes sparse, and I'm not modeling a road that I can just go down and watch or ask people who are currently on the job, I (we) often have to try to fill in the blanks with what I do have. There are people who do still remember the period I model, and their information is another piece of the puzzle, along with photos, paperwork, and other physical documentation.

Sometimes, though, I have to make guesses, and later or other information may not support those. As more information is uncovered, I can see if that supports or refutes prior theories. My recent post on yard operations is a perfect example of that, where I interpreted the evidence one way, and have received some great insight from others, along with getting some more source material to work from.

So here's some thoughts on another subject, I welcome more input!

I have ribbed Chris about how the Rocky Hill and Wethersfield freight houses don't receive cars by rail. We have evidence too, from first hand accounts (I'm pretty sure that John Wallace has commented on it), plus documentation in the form of the Freight Train and Package Car Schedules that not only don't list either freight house as originating or receiving traffic, but are identified as being served by truck.

As another example, Thompsonville is also not listed as originating/receiving freight at the freight house and being served by truck. a quick look at what I have right at hand and this is the case at least as far back as 1947.

So how to explain these photos I recently posted, courtesy of George Ford? 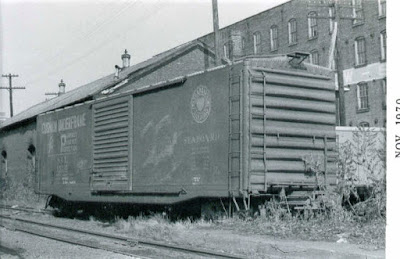 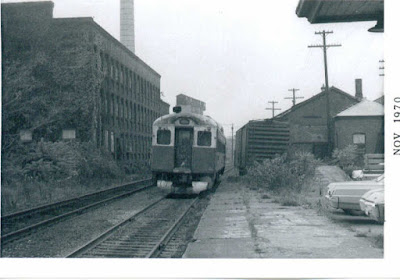 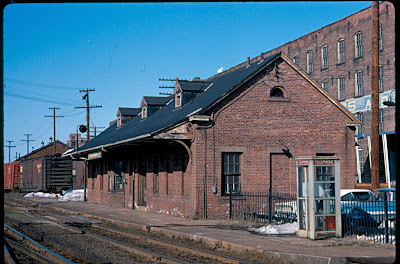 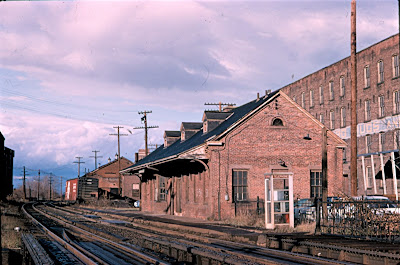 These, among others, clearly show cars freight cars at the Thompsonville freight house in the late '60s and early '70s. Did the NH or Penn Central re-establish service to the freight house? I don't think so, but I'd like to reconcile with the information I have available.
In most towns on the New Haven, there was a freight house and a bulk track (also known as a team track, although New Haven maps have them labeled as bulk tracks, where labeled at all). In Thompsonville, the bulk track is the same as the house track, and extends to an open platform beyond the freight house.
In addition, the Freight Train and Package Car Schedules are identifying the arranged package cars, that is, scheduled L.C.L cars to/from a given freight house. By the postwar era (and from what I can tell before), a lot of the L.C.L traffic was shifted to trucks because there wasn't enough regular L.C.L traffic at small town freight houses. Even earlier, peddler cars would be used, where the local freight (or in some cases a mixed train of passenger plus L.C.L) and the cars would be loaded/unloaded as the train waited.
So while it is true that Rocky Hill and Wethersfield freight houses weren't handling L.C.L in Chris' era, does that mean they didn't handle any traffic by rail? I think the answer is still no, they generally didn't handle any traffic by rail at the freight house. I think I have enough evidence to reasonably make that statement (while not excluding the possibility of an exception).
The freight service for customers that don't have a side track directly to their industry could be served one of at least two potential ways.

L.C.L at the Freight House

Whether the traffic came via rail or trucks, the less-than-carload traffic would be loaded/unloaded by railroad employees at the freight house. The customer facing side of the freight house typically had a platform and doors for trucks, depending on how the customer would deliver or pick up their goods. But to the best of my knowledge, customer would not be allowed on the platform to load/unload railroad cars.

Carloads at the Bulk Tracks (aka Team Tracks)

The bulk tracks often had a loading platform and a crane in addition to open tracks. Usually arranged with tracks in pairs, with a wider driveway to separate the pair of track. A truck could back right up to a box car or reefer and unload that way. The crane was generally used for transferring heavy goods from flat cars or gondolas to a truck, and the platform could be used for certain commodities like automobiles.
Could L.C.L be unloaded at bulk tracks? In theory yes. And there are photos of cars like reefers being unloaded directly to trucks, and from what I've read there were often partial deliveries of produce.
Were any carloads unloaded at the freight house? Is that perhaps what we see in Thompsonville?
I think the answer to both questions is no.

In terms of L.C.L traffic, the railroad is responsible for the goods from when they are dropped off to the freight house until delivered to the consignee. We have also seen shipments to multiple destinations could potentially be loaded by the industry on their own side track. But once the railroad has taken possession of the goods, they are responsible that it reaches its destination, and in good shape. The cars are locked and seals are applied. So if a car is to be partially unloaded, I think that a railroad employee must be present to ensure not only that the remaining load isn't stolen, but that it is properly secured and won't be damaged on the remainder of its trip.

As for carload traffic, the consignee can unload it themselves at the bulk track. If the railroad employees unloaded it, then there would be an additional cost to the industry. That's essentially the purpose of the bulk tracks - to allow an industry that isn't served directly by rail to receive carloads of freight.
To the best of my knowledge, we haven't seen any photos of freight cars at the Rocky Hill or Wethersfield freight houses postwar. But we have seen photos of cars at the bulk tracks, which is exactly what I would expect. In a town like Thompsonville, it's the same thing. It looks like the freight house is receiving goods by rail, but it's really the bulk track. In George's photos you'll note that the cars are spotted as far down the track as possible, instead of right in front of the freight house. The bulk track was the platform at the end of the freight house.