This booklet tells the story in great detail of the old and new Yard Operations processes and paperwork. In my quest to better understand the the inner workings of  New Haven Railroad, this was the single most informative document I found regarding the paperwork and processes used in yard operations.
This is not that story.
But it is the story of the first hint to the public, and most employees, of what was to come was reported in the October, 1945 issue of Along the Line. 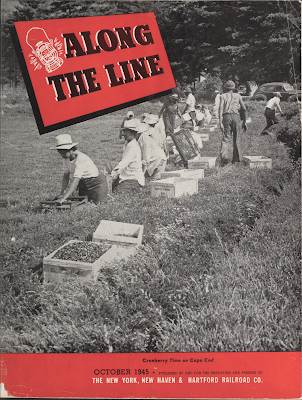 We "Kept the Home Fires Burning" 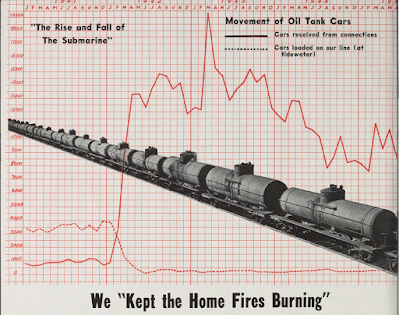 This is an article about the movement of tank cars during the war. Due to U-boats attacking tankers offshore, the movement of oil was moved (almost?) entirely to rail. ODT Order No 7 required the railroads to move tank cars of oil as soon as they were ready, over the shortest routes, and with the highest priority, superseding all other rail traffic. Since the oil was for the war effort, it was shipped primarily to northeastern ports, of which the New Haven had "between 600 and 700 unloading places." The change in traffic on the New Haven was enormous, and immediate.
In January, 1942, the New Haven handled 702 tank cars of oil. In February, this total more than quadrupled to 3,198 cars. March and April continued the trend, to 8,993 and 13,365. From that point the New Haven handled between 12,000 and 16,000 tank cars daily, with the highest total in March 1943 of 19,351 cars. The decline in shipments occurred in 1944. In January it was 11,507 cars, and 8,461 in December. In July 1945 the total was 6,747, still almost 10 times the prior normal.
In September 1942, a new process was implemented on the New Haven to make it possible to track the tank cars "hour-by-hour." As the article states:

Agents had a special report requiring the following information:

Date and Hour of Each Move;

Date and Hour Placed for Unloading;

Date and Hour Released by Consignee;

Date and Hour of Each Move;

Date and Hour Delivered Off Our Line.

These were transferred to individual car records, filed numerically in loose-leaf binders-a separate "car record sheet" for each car. As soon as report of a car's arrival on our line was received, a record sheet was inserted for that particular car. Then, as each subsequent move was reported, it was "posted" on the record until the car was delivered back to a connecting line..."

To start, I just want to point out how efficient, if labor intensive, this process was. The amount of information generated and recorded by the railroads through paper was enormous. This was a special project to track tank cars, but this information was recorded for every car, every day. For tank cars alone, the war-time increase was on the order of 400-500 cars per day. That's 4 to 5 additional trains running of nothing but tank cars.
While there is a lot of work involved, when the process as a whole is studied, I can't imagine a system that would be more reliable or efficient than what the railroads had devised by this time. Reports were sent to the Car Service Department by train. I've seen it noted somewhere that important ones went on the next passenger train. So as soon as the reports are finished in, say, Providence. They are sent via the next passenger train to the Car Service Department in New Haven.
It was the next step of the process, though, that I think also served as a test/proof-of-concept for the new system that would be implemented shortly after the war.

The finished record sheet was then removed from the loose-leaf binder and all the information was transferred to a "punch card" on an International Business Machines tabulator.
Number symbols are used for this purpose. Commodity "3" for instance, is heavy fuel oil. Origin "1" is Texas. Shipped "99" is a miscellaneous shipper. Consignee "3" is Socony. Junction point "31" is Maybrook, and connecting line "56" is the N.Y., O.&W., so entry 3156 means it was received at Maybrook from O.&W. Destination 2022 is East Providence. "17" is Cedar Hill. "23" is Northup Avenue.

This system allowed them to quickly and easily print reports, usually for 10-day periods. The 10 days ending Septermber 30, 1943 showed 4,718 cars took an average of 20 hours from arrival to destination, 5 hours to placement, 11 hours to release, 12 hours to departure, and 18 hours back to the connection, or an average of 88 hours on the line.
They show examples of the paperwork involved: 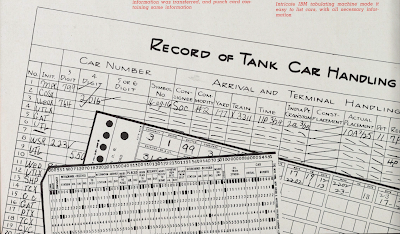 The implementation was centralized at the Car Service Department. That is, the Agent reports were taken to the Car Service Department, where the loose-leaf records were kept and then transferred in the "punch-card bureau" as noted in one of the photos. These were where the IBM tabulators were to create and read the punch cards.
With tank cars, the IBM system was used only for the purpose of reporting after the car movements were completed. But I think it was more than adequate to prove that the IBM systems could streamline the process, if there was any question before. The next step would be to use the machines in "real time" to generate operational paperwork.
Posted by Randy at 11:18 AM