First post in February, shooting for once-a-week minimum for now.

As I mentioned in my last post, I picked up two DL-109s at Springfield. One of them had a modified roof, the other Tsunami sound. Together they give me an operating locomotive for 131/136 until I complete my models.

One of them was sold as having the "correct roof." Dale came across the model and sent me a picture, and I could tell what was done. Winterization hatches were added and then the roof repainted. For a truly accurate roof for this locomotive (0702) and era there's more to be done, and it doesn't address any work on the pilot. But for a quick fix to get a locomotive running it's great.

I've owned over a dozen of these models over the last decade. I've bought and sold them many times. They are the locomotive that pointed me to a road and era. I could easily pick up a few of the other paint schemes and do the same thing, since there are four different paint schemes that are in use during my era prior to them being rebuilt. 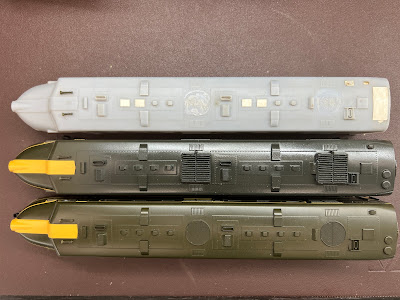 Here are three models. The one on the bottom is unmodified. The center is the new model with the "correct roof" which has the winterization hatches installed. The top is the shell I've been modifying. It lacks the new winterization hatches, but you can clearly see the other modifications made to the roof. It still needs two square vents that are above the engineer and fireman's doors.
All of these modifications can be made to the roof without impacting the main paint scheme of a factory decorated model. It won't matter if the green is 100% correct because the roofs got black very quickly and will be weathered accordingly.
The rest of the modifications are the pilot, and I haven't figured out the best way to do that just yet. One of the changes would require repainting the locomotive altogether so would be avoided. But I think I could do the other modifications easily enough and still keep the factory decoration intact. So those may happen sooner rather than later on the other ones.
For now, this one is the current model. The problem is, it's not running great. It stutters and stalls, and there is a loud buzzing of some sort near the front.
The first step, of course, was to clean the wheels thoroughly. I have the Woodland Scenics Roto Wheel Cleaner for just this purpose. I use odorless mineral spirits to wet the pads and then run at high speed in both directions, dragging it back and forth in the process to make sure they are really clean.
That didn't take care of the buzzing and all of the performance issues, so time to take a look inside. 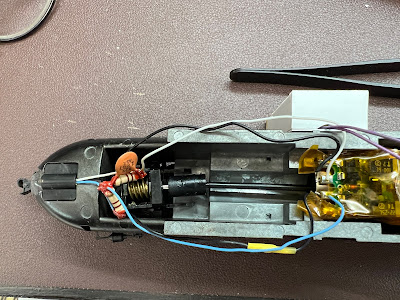 The installation was done with a homemade speaker enclosure, which was rubbing against the drive shaft. This was creating the buzzing and may have caused some of the performance issues too. 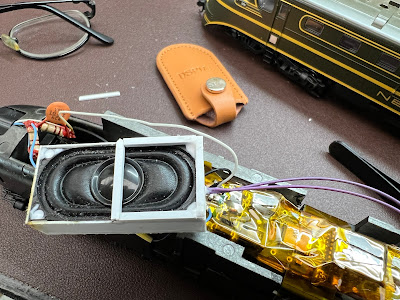 An easy fix was to build a spacer of scale 6"x6" styerene. I also filled the open screw holes in the speaker and a few other holes in the enclosure with Aleene's Tacky Glue. I'm not sure it made any difference in the sound since noise cancellation caused by the soundwaves from the back of the speaker is complex, but it's good practice anyway to have a properly isolated enclosure. 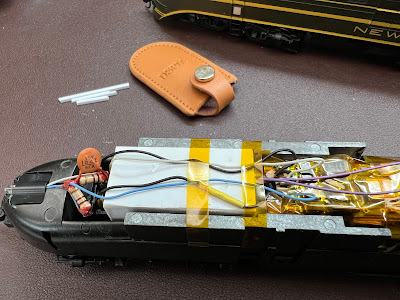 I used a couple of pieces of Kapton tape to ensure the enclosure didn't lean into the drive shaft or gear tower and to secure the wires.
That resolved the buzzing and 99% of the performance issues too. Although this has electrical pickup on all six axles, there's a good chance that the axles and wipers could use a cleaning. I'll give it a chance to run for a little while, and take a closer look at those if I need to in the future.
One funny thing is that the locomotive is programmed without any momentum at all. It is really strange after all this time to be running a locomotive that instantly stops at 0 speed step. I'll need to reprogram that, but apparently for this older Tsunami I'll need a programming booster to do that. I haven't set it up on a programming track to see if that would work, since I don't have a dedicated programming track.
Posted by Randy at 7:09 PM