It still amazes me that after all these years that new information, photos, videos, etc. continue to crop up.

In a thread on the NHRHTA Forum, somebody had pointed out a video by Joe Landry that has footage of the New Haven in and around Franklin, MA. Obviously, I love to check these out just to see more footage of the NH in action, but I hadn't gotten around to checking it out until now. It includes some phenomenal color footage from the early to mid-'40s. Even more surprising was a couple of the subjects captured.

Here's a still I captured from a run-by of a passenger train headed by a DL-109 on September 9, 1942. It's great footage, but what's nice is that it's from an overpass so we get a good view of the roof details. 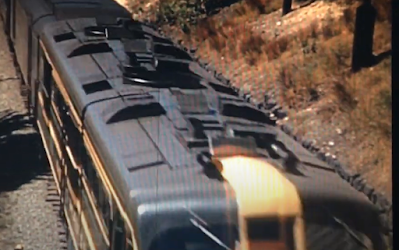 But what I didn't expect was that this unit in September 1942 had not received winterization hatches yet. The first ten units were delivered this way, and an article from 1943 indicated that the NH had determined (as reported by P.H. Hatch, Assistant Mechanical Engineer) immediately after the first locomotives was placed in service that they were needed. Locomotives 0700-0709 arrived on the New Haven between December 1941 and April 1942. The second group arrived from Alco with the winterization hatches installed, starting in July 1942. I'm not sure I've seen an in-service photo without them.

Shortly after this in the video was another pleasant surprise. Color footage of Alco No. 1500, one of the RS-2 demonstrators that was built in December 1945. 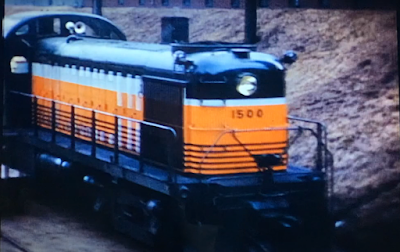 I've seen a number of photos of this locomotive and knew it had been tested on the New Haven (photographed in Waterbury, among other locations, if I recall). But I've never seen a color photo, much less a video.

The whole video is quite interesting, with lots of info and more fantastic footage, including the Comet.