So the employee freight schedules on the New Haven, Arranged Freight Service Symbol Book, were published at the same time as the Freight Train and Package Car Schedules. New Haven fans often refer to these as Symbol Books. 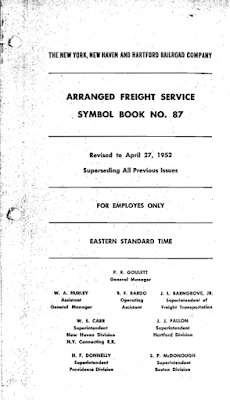 The early editions appear much like the later Freight Train and Package Car Schedules. The presentation of information is almost identical. The latest edition I have with this format is a NHRHTA reprint of the October 30, 1929 issue. If this format was combined with the 1935 Package Car Schedule I mentioned in the last post, it would comprise probably 90% of what became the public freight schedules. The cover of the June 12, 1927 issue does indicate "For Employes Only."

An interesting sidebar - in pretty much all of the New Haven official publications employee is spelled with only one 'e' ("employe"). The story that I've heard is that the second 'e' is optional, and the railroad chose to save on printing costs and eliminated it. A similar reason has been attributed to GE as well, which is listed on this site, as is an interesting alternate origination: since the 'e' and 'r' keys are next to each other on the keyboard, eliminating the extra 'e' reduced the risk of accidentally typing 'employer' instead of 'employee' in legal documents. 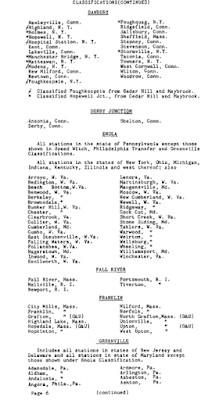 After the index and general instructions regarding train symbols, is an extensive section on classification. This is quite interesting because it includes some information on routing (with regards to destinations in common with other carriers), but most importantly the classifications used within the major yards to move traffic, including to some foreign destinations. The classifications include a listing of all stations within that classification. So in my case there are a few that are relevant (these are from No. 89):

This note is necessary because while Cremo Brewery is in the city of New Britain, its siding is off of the Springfield mainline. It's serviced by whatever train is assigned to work Berlin, not New Britain.

Hartford
New Britain (from Springfield only).

So this clearly tells us that (as would be expected) cars bound for New Britain from Springfield don't go all the way to Cedar Hill before heading to New Britain. They'll be put on a train from Hartford instead. Which makes sense. But this classification changed from time to time. For example, by April 25, 1965, there were no trains scheduled from Hartford that would go through New Britain. So all cars destined for New Britain were classified Cedar Hill.

At the end of this section is an alphabetical list of stations that indicates their classification. 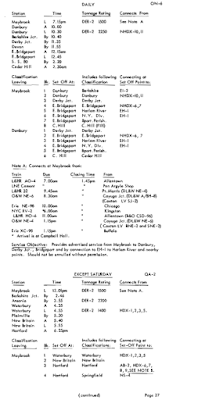 The main part of the book are the actual freight schedules. This is full of useful information for modeling operations. It includes the symbol and name (if any), along with the major locations of service. For example (from No. 89 again):

Bay Ridge-Cedar Hill-Providence-Boston
Boston Speedwitch (NH documents can't seem to make up their mind whether this is one or two words...)
BNE-1 Except Sunday Boston to Cedar Hill
Daily Cedar Hill-Bay Ridge

Then it lists all the stations (towns) it serves, including times. Next to each station is indicates any connections they make (by symbol, including connecting roads), or 'extra' for a local freights in later issues. It also includes the usual power and tonnage rating.

After that it lists the blocks from each town, and any classifications within those blocks. It also notes the connections for those specific blocks.

Special notes follow, such as closing times at freight houses, and then the service objective is listed.

This gives you all of the information needed to block inbound and outbound freights, assigned power (if not specific road numbers), and timing. Note that in this section, these are all through freights, with a few exceptions.

Since No. 87 doesn't have a New Hartford Local, here's the Valley Local instead.

This section details the local freights. The local freight symbols changed over the years as divisions were combined. For example, through at least No. 87 (April 27, 1952), the actual locals were noted in the connections with the symbol freights. New Haven locals were NHDX-x, Providence PDX-x, Hartford HDX-x, etc. but by No. 89 in 1953 they are noted as 'extras' in section 2, and in the local freights identified with a two-digit symbol, NX-x, PX-x, BX-x. In 1941 there were four divisions, New Haven, Hartford, Providence and Boston. In 1953 the Hartford Division has been eliminated, and in later years there was only two, New Haven and Boston Divisions.

The local freights include the towns they serve, the days they serve them, and times. Some trains have specific notes as well.

Times are an interesting topic. For through freights, the times were pretty standard, and from articles and discussions with New Haven railroaders, they seem to have kept pretty close to their schedule. Locals, on the other hand, simply did their work. There are a few specific times that are noted for local freights that seem to have been closely adhered to:

They have the Diversion of Perishables information listed here. Some also include truck service and the towns they serve. The 1953 through 1964 ones also include L.C.L service,  which incorporates the truck schedules. This appears to be the same as the public schedules, with a little more information, such as zones. I haven't quite figured out the zone system, but the key info here remains the same as the public schedules - what cars need to be spotted at the freight house? 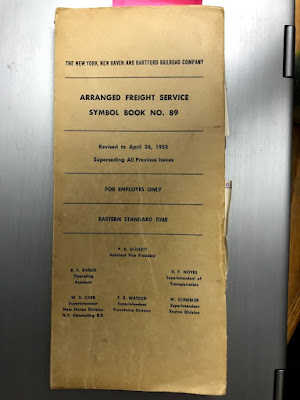 This is a very interesting issue, that I grabbed on eBay not realizing that it was any different from any others I had located. Whoever owned this one taped all of the bulletins that modified service into his copy. So it is loaded with these modifications, additions, and cancellations of specific trains. In addition to those notes, there are a lot of updates and notes made in pencil as well. He's taped in the map/schedule for the New Canaan Branch. I don't know if he wanted the map or the train schedules. It also has the map page from a B&M public timetable, so I'm guessing the maps. 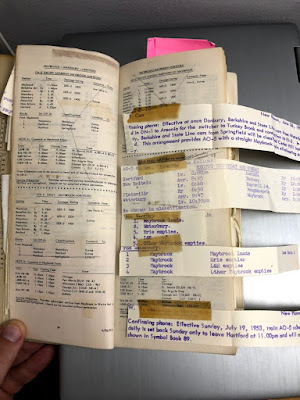 Aside from showing how complex operating the railroad was in this era, with regular changes and updates, I'm surprised that he appears to have included all of them, rather than just the ones that applied to a specific line as one might expect, since conductors often worked regular jobs. If the maps weren't taped into the back, I might think that it was an office copy, with the changes taped in place for the purpose of typing up the revisions for No. 90. 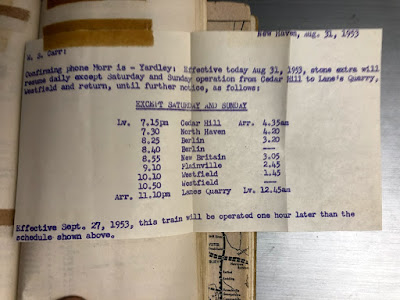 Whatever it's origin/purpose, it's the only one I have that mentions a "Stone Extra" for servicing Lane's Quarry in Westfield. I hadn't looked at it in a while and had forgotten that it's not for Cooke's Quarry, although it does go through New Britain and Plainville.e. I suspect that "Stone Extras" created to local quarries when the New Haven was (re) ballasting a line.