A mini project that I can work on when I have a few moments (and to make sure the cats won't be a problem when I'm working on models upstairs).

So I (and Chris) will need a lot of switch stands. The sprue of parts that comes with the Rapido Rail Crew Switch Machines includes 3 different Racor switch stands, all of which were used on the New Haven. They are designed to be "operable," that is, they'll turn when the switch machine turns. I spent some time trying to figure out how to make them turn without the switch machine, and while some ideas showed progress, it was very fiddly, and ultimately probably more trouble than it's worth, at least for me. So for now these will remain solely as scenic elements.

Incidentally, while I like the switch machine, I'm not using them because:

1) They weren't available when I built the layout.
2) I can't afford that many switch machines.
3) I find it more intuitive to directly throw the points of the specific turnout, than it is to locate the correct switch on the fascia. Especially in areas with lots of turnouts.

Note that for areas where the switches are thrown by a tower operator, such as Chris' section of the Shoreline, then I'd absolutely use the switch machines because they'd need to be operated remotely.

I was fiddling with them when Chris sent out an email wondering who had our box of switch stands. Since I'll give him back what I'm not using, I decided to go ahead and start putting some together, which has grown into I'll probably put them all together. I figure Chris is going to need them too...

The process itself is simple enough. I spent an hour or so cutting the parts off of about 80 sprues (and did another 30 today). 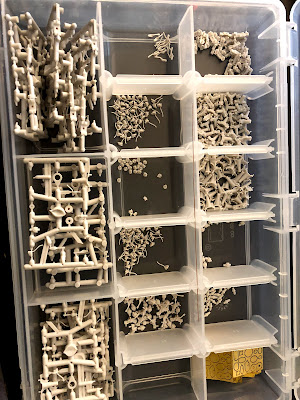 Parts.
I figure the workers at the factory do this in about an hour...
Those three trays of sprues are now holding many finished switch stands (although not enough!) 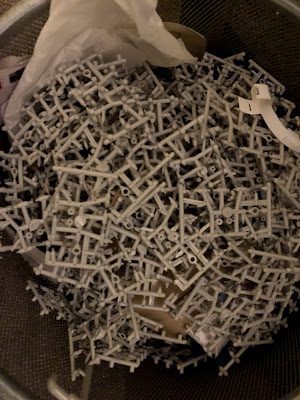 Dead sprues (with the "working" parts if I were using Rapido's switch machines)
I think I've got 144 sets.

Rapido indicates there are one each of three styles:

The reality is that there are enough parts to do at least two stands, one low and one high, since there are only two lanterns, and one set of brass etched targets (there are a lot of target styles, but you'll probably only use one of them).

They were originally designed to come with their switch machine, with the assumption you'd pick the one needed. The reality is, they are such great parts (and greatly needed), that they decided to package them separately too.

So with each set, if you aren't planning on using the switch machines, you can make a 20C with the lantern with day targets, and either the 17B or 31B with the mainline-style lantern and brass targets.

I'll be assembling the lantern, targets and handle, but not permanently mount them to the base so I can choose whether to use the 17B or 31B when installing them. I am attaching the lantern and staff to the 20C stands. 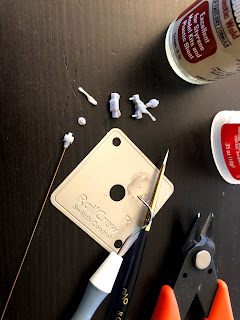 The parts are already cut off the sprue.
You can see a completed one on the table next to the parts.

Glue a lantern onto a piece of wire using CA.
I grabbed what was handy, I think it was Tichy .0125" wire.
The wire connects the pieces together, and also makes a handle while working on it. 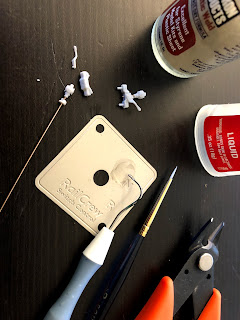 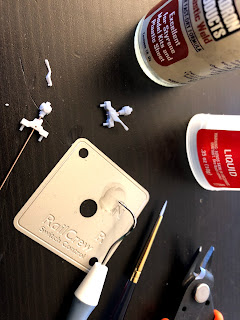 Thread the switch stand base onto the wire.
Glue the collar onto the base using Styrene Cement.
The hole for mounting the operating lever should be facing up (you).
The tall part of the collar points toward one of the two corners. 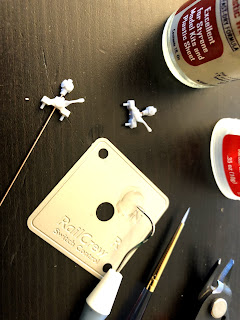 Glue the lever at an angle using styrene cement.
Cut the wire off under the stand.

The process is the same for the taller stands, although not all of them need a lantern. It seems like the best way to attach the targets to the wire will be to solder them. I plan on installing them once I know where each stand will go so the wire will be hidden behind the targets.

I'll paint the entire thing black, then detail the lantern.

For New Haven modelers, lanterns were only lit at night. which makes it easy to paint the "lens" silver, then use a transparent paint on top of that to add the color. The important thing to consider here is that the "white" lenses are colored blue. When lit they appear white.

Since I'm painting these lanterns for day use, instead of trying to figure out how to install an LED for night use, I'll paint those lenses blue.

I use Citadel inks from Games Workshop, a line of paints designed for fantasy miniatures. The bottles I have are quite old (I think I bought them in the late '80s). They are now labeled as shades by Citadel, although I might try the glazes for this application.

These are very thin, transparent colors. While you can get a similar effect by diluting paint into a wash, that tends to dilute the color too much, requiring multiple washes for the desired effect. These inks, and similar products, don't have that problem. 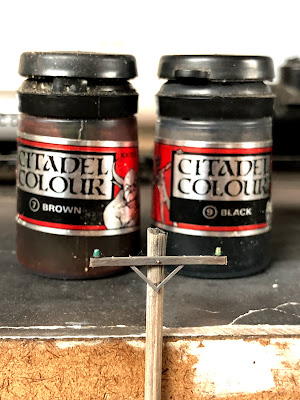 If you've never looked into the techniques and paints that fantasy mini painters use, here's a great collection of videos that explains their line of paints, and particularly the videos on shades and glazes so you can see how these two products work:

Games Workshop is a UK company, and their games are entirely miniature-based. You'll have to look for colors you like based on appearance, since they are all named for their monsters...

They have some tools and other things that are useful from time to time. The main issue I have with Citadel is that their paint and accessories line tends to change fairly frequently. For example, I don't really see a paint in their line that's a close match to the "chainmail" that I still use. You could get something similar by mixing silver and black.

They also position themselves as a premium company, with prices to match. Having said that, their Saw and Mouldline Remover might be useful tools to have.

Citadel miniatures are found in any store that carries the Games Workshop minis. There are still some hobby stores that carry both gaming and railroading stuff around (there's four within an hour of me that I can think of), and gaming stores will often carry them too. They also have their own standalone stores. As far as I know, Games Workshop pretty much requires a store to carry their entire line if they are going to carry any of it. So you should be able to see all of the colors.

I also have some Reaper inks, from another fantasy miniature company that has two lines of very good paints. For years I was painting everything using these paints, since I had a full set of some 300 different colors. Reaper were the first to come out with sets of paint specifically designed for the basic approach that fantasy miniature painters use, but is useful for all modelers.

Each color is available in a 3-part set: Base, shade, and highlight. These are all the same basic color, but formulated for the basic approach of base, wash, drybrush. You see the same approach in the Citadel paint line as well. While fantasy miniature painting is a niche hobby, it's an active one. The main downside to Reaper paints is you'll have a hard time finding them in stores. So it's hard to compare colors since you won't be able to see them in person.

Vallejo also makes both a line of fantasy mini paints, as well as modeling paints for railroads and military modelers. While they don't have specific inks or glazes, they have an extensive line of mediums, including a glaze medium that can be mixed with with their paints for the same transparent effect as the Citadel glazes. Vallejo paints can be found in hobby stores, gaming stores, and art stores. However, the given selection is usually tailored for the type of store. So you won't typically find the "Railroad Weathering" set in an art store. They seem to have very little penetration into the model railroading hobby, a little more in the fantasy gaming hobby, and much more in the military and historical modeling hobby, aside from art stores.

Of course, any acrylic glaze medium should work in a similar manner. Mediums are different from just thinning with water (or solvent if using a solvent-base paint) because they tend not to dilute the color as much. But I find it easier to just use the colored inks that are designed for use in painting minis and models. I have no idea if these are the same as artist inks you'd get at an art store.

Didn't mean to go off on a painting tangent there....I suppose I ought to paint a few of the switch stands I've finished to see how they look!
Posted by Randy at 2:09 PM