I promised a buddy at the Enfield meet that I'd publish something on the blog about this.

Looking at the options available for PVC pipe, a 2" interior diameter has a 2-3/8" outer diameter, or 60.32 mm. Dividing by 3.5 mm per foot yields a bit over 17 feet. Our estimate was 16 feet, but the extra size won't have a sizable impact, particularly since our measurements were best guesses anyway.

Even more interesting is that based on the Sanborn map, combined with mocking up the model on the layout over the last couple of years (cans of spray paint, cans of soda, etc.) I had settled on the squeeze bottles used by restaurants for ketchup or condiments (and I use for diluted glue). I decided that for the space I had, five of these looked "right." At the time, I marked their locations on the layout. After Dick gave me the PVC structure I discovered it was an exact fit to the dimensions I had mocked up. 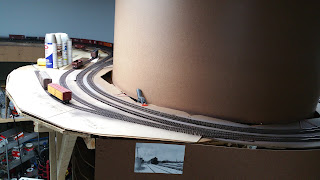 Dick's approach to building the model is ingenious. I figured I would use something like PVC to do it, just wasn't sure how. He screwed a piece of PVC to plywood to keep it from rolling, then shaved the two sides flat. Our estimates meant he could leave enough material to avoid cutting all the way through the wall of the pipe, making construction much simpler. He arrived at Chris's with the whole thing assembled and cut to size. 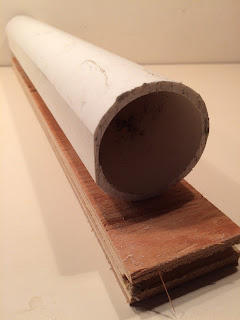 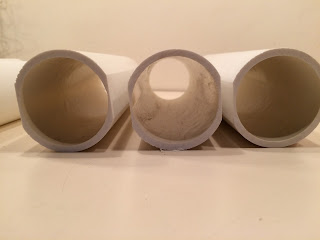 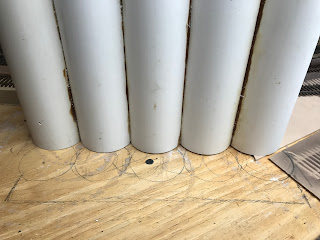 You can see my estimated footprint which I derived based on Sanborn maps and the size of my ketchup squeeze bottles (I think) is almost an exact match! 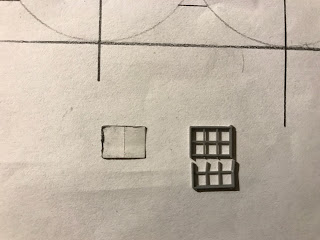 For calculating the rest of the details (so far), I started with the idea that the window panes are 1' x 1' square, making a window that is approximately 2' x 3' in size. Working this out in HO scale led me to a Grandt Line and Tichy window that is almost the exact same size, save that they are double the number of panes high. So I've cut off the lower portion of the Tichy windows to get the correct size.

To install the windows, it appears they are about 3/4 the height of the windows from the top. I tried snapping a chalk line to mark the top of the windows, but I couldn't get an even line, but the chalk didn't really stick. So I just used a caliper to mark each silo. Finding the center was a bit tougher. 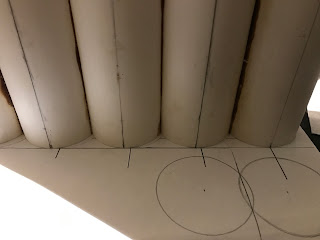 Based on the dimension of the windows, I mocked up the head house with rough measurements. This took a few attempts to get a final size I'm happy with. The house itself is a simple styrene house, with the proper I-beam support. 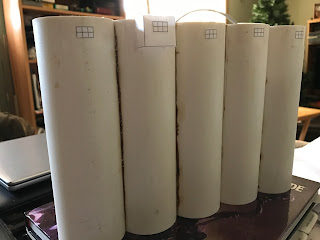 Paper mock-ups of the windows and head house. 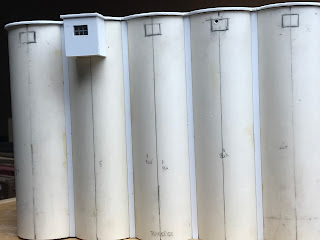 Styrene head house and styrene strips between the silos, along with a thick styrene roof. 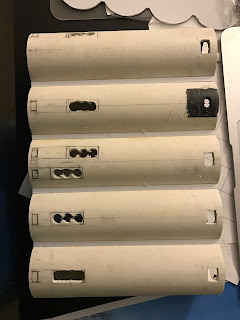 The fun begins! Drilling and filing holes. Ugh.
The black paint is where the head house will be.

So I had to figure out roughly where, and what size, the holes needed to be for the chutes, windows, and cleanout doors. I drilled out the holes, used the Dremel to clean as close to the lines as I could, and filed, filed, filed until it hurt. PVC is not easy to file by hand. 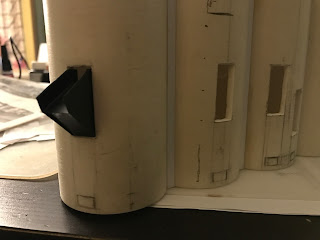 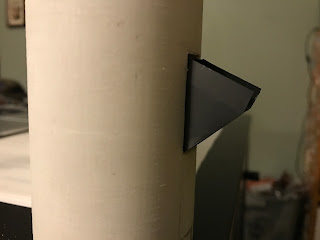 I mocked up a coal chute using thin black styrene sheet.
It's a much simpler shape than it looks, with a U-shaped chute, two sides, and a bottom sheet.
This one's a touch too wide. 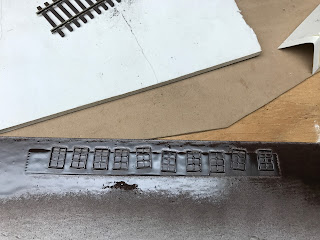 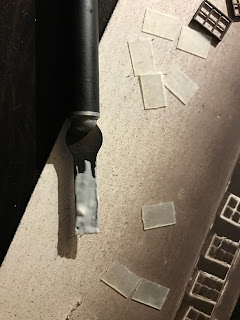 For the windows, I used double-sided tape to hold them in place while painting them with my go-to Rustoleum Camouflage Brown.

I used a Rustoleum Frosted Glass on the window panes to make them translucent.

Next it was time to paint the main structure. 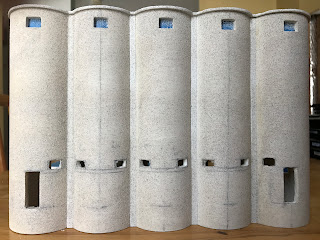 Oops.
I'm using a textured Rustoleum paint, but didn't realise it was so transparent. 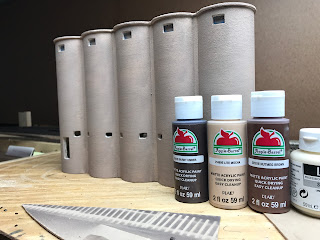 I blended a rust-brownish color using craft acrylics to cover my pencil marks. 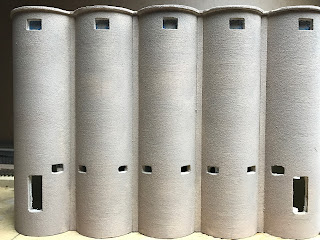 Then resprayed with the textured paint. 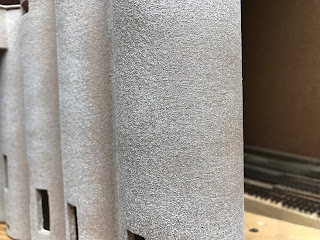 The texture is pretty strong. I've since sanded it down a bit, in part to make it less evident, but also to try to add the horizontal banding evident on the prototype. 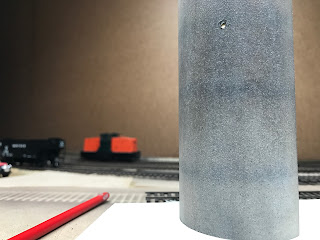 I also experimented on a piece of scrap to try and get the horizontal banding caused by the construction of the prototype in multiple pours of concrete. I'll see what I do when the time comes.

The model itself should be grayer, and needs weathering. 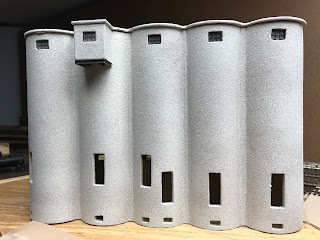 Here is is with the head house, including a frame of steel channel underneath, and the windows... 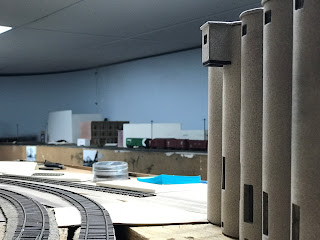 ...and in place on the layout.

I've since come to the conclusion that the head house is a little bit too narrow. But it's installed and painted and I don't want a seam where they meet, so for now it's staying.

I wanted to paint the entire thing with the roof attached to avoid a seam there too. I couldn't figure out a way to mask the windows, nor to install them after it was painted without removing the roof. As it turned out, I was able to remove the roof, and the seam is still virtually invisible when reinstalled.

I looked at as many ladders with safety cages as I could. Walthers has produced them in brass and plastic, Plastruct has a plastic one, and Gold Medal Models a brass one. While I like the Plastruct and Walthers plastic ones because the cage is already intact, the structure wasn't a match for the ladders I'm reproducing. Each of those has 4 vertical stiffeners, instead of the three as on the prototype. Tichy one has the advantage of it being a kit, along with having the correct structure (one center vertical, along with one on each side). Because the frame is separate from the ladder, I can also make short and long sections as appropriate. The prototype also has diagonal stiffeners every other course. The addition of some nbw-castings will finish the proper look.

In addition to the ladders, I have to complete the chutes on the track side. Then I need to tackle the street side (which will be the more visible side). The platform and roof will be challenging enough, but the chutes on that side are different, with two merging into a single loading chute. I haven't figured that out yet.
Posted by Randy at 12:07 AM