So Mike Kay asked in a recent comment where to find New Haven Freight Schedules, since they aren't listed in the Employee Timetables.

While I have some information on the main site here I'll go into a bit more detail as they are valuable primary sources of information. Usually published twice a year (in Spring and Fall), the freight timetables were produced in two formats. I also have a few schedules from other railroads, and it appears the general approach is similar on many roads.

The best place to find them is eBay and then train shows. But we've got a pretty good collection of New Haven ones so feel free to ask if you're looking for specific information. Also, the California State Railroad Museum has an extensive collection of New Haven freight schedules of nearly every year. It's a mix of the public and employee timetables.

And if you have some yourself, we're always looking to fill in gaps and are happy to trade digital copies for these or other railroad publications. In particular we're still looking for engine assignments, especially 1946-1948.

Note that the earliest of these types of documents I have is November 12, 1935. I've also got an Arranged Package Car Service booklet from April 28, 1935 that only lists the package cars (L.C.L). The April 26, 1965 issue is called Freight Train Schedules and does not include any package car service. I am missing the 1964 issues, but the October 27, 1963 issue still has them, although the truck information has been folded into the package car schedules.

The issues were numbered as well, although not all were so labeled. The earliest I have with a number is the September 28, 1941 issue (#72), although the last one I have that doesn't have one is the November, 1935 one I mentioned. So while including the numbering started between those dates, the numbering itself did not. The April 29, 1951 issue is not only misnumbered, labeled as #84, it also refers to the wrong preceding issue, "Superseding schedule No. 83, April 30, 1950." This appears to be an old "copy/paste" error, as the actual preceding issue was No. 84 from September 24, 1950. 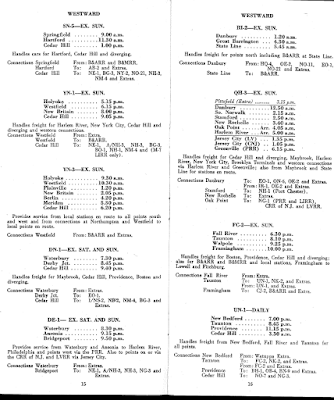 The first section of the FT&PCS is a list of the regular freights. Each one notes the schedule and connections.

At the end of each section (westward and eastward), there are tables of connections, and shipping time examples based on when and where the car is picked up, and when it will reach major destinations. These are, of course, estimates, but the reality is that there were planned connections at each interchange point along the way. 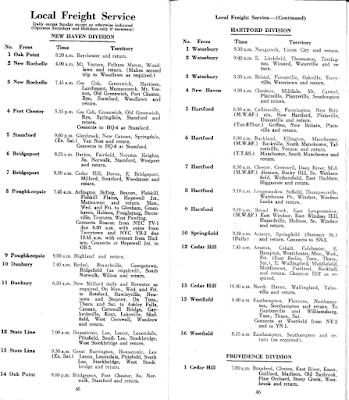 The second section lists out the local freights. This is a simple list with the time they are scheduled to leave, and a list of stations (towns) they serve. 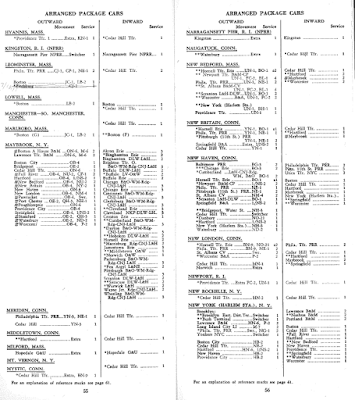 The third section is Package Car Schedules, or L.C.L traffic. These are cars that are spotted at freight houses. Each car has a specific scheduled destination to a freight house on a foreign road. Aside from the obvious scheduling information, it also tells us which freight houses are still served by rail. Many of the New Haven freight houses in later years were served by truck, although a consignee could make arrangements to use the house track for a car if that was more appropriate than a bulk (team) track.

This is also very useful information for modeling, because it tells us exactly what cars need to be spotted at a freight house. Local consignees might request additional cars at the house tracks as well as I already noted. 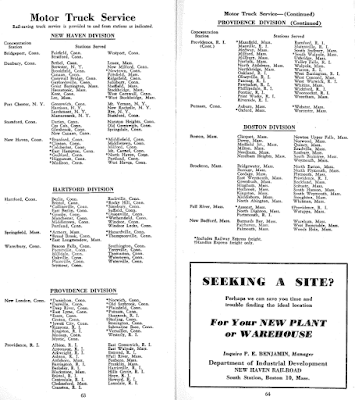 Motor Truck Service. There are a lot of stations (towns) that aren't served by rail at the freight houses. These are towns that don't generate enough business to warrant a car to be scheduled in that location. Instead, trucks will take these loads to one of the larger freight houses. It indicates which station will handle the transfer to rail (Concentration Station), and the stations that are served along they way.

There are ads for the railroad and their services (Seeking a Site? For your new plant or warehouse, contact the New Haven Railroad for assistance). In addition, there are pages with specific information of benefit to shippers. 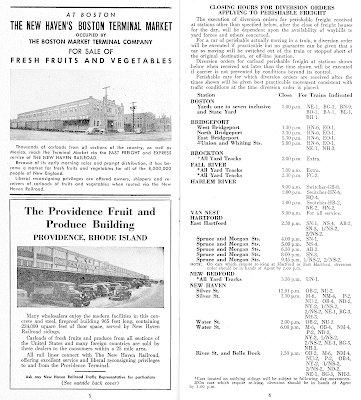 There are two pages noting closing times for diversion of perishables. Back in this era, it wasn't uncommon for perishables to be loaded without a final destination. Brokers worked to sell these carloads while the reefers were on the road, typically from the west coast (PFE, SFRD, and others) or the south (FGEX and related). If a buyer was found, the car was diverted to that location en route.

There's a route map, and a list of direct railroad connections. 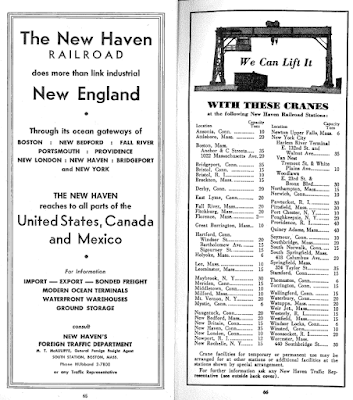 The inside back cover has a list of cranes, with locations and capacities.

The back cover is a list of online and offline New Haven Railroad traffic agencies.

One of the most useful things that Chris and I have found is comparing different issues to identify what's changed from year to year. It gives a pretty good start for understanding the evolution of service over a period of time. The era we selected is a good one for that since traffic was strong in the immediate postwar years, but slowly declined, with a number of changes moving into the 1950's. In 1951, though, traffic began to pick up again, due to the Korean War.

This has gotten a little longer than I expected, so I'll cover the employee freight schedules in a second post...
Posted by Randy at 5:38 PM