One of the (dis?)advantages of model railroading is that there are many, many different things to do at any given point in time. I've been telling people that I'm a "proof of concept guy" which means that I have a lot of projects that have gotten to the point where I know they'll work, and I've since moved on to something else.

So I've started playing to my strengths. Instead of trying to work on a single project to completion, I'll work on things here and there, and eventually they'll all be completed. It's been a great change in approach, because I've been working on modeling projects much more frequently, instead of worrying about finding enough time to work on this project or that.

Over the course of several evenings of fixing computers and watching TV, I cut all of the parts off of the sprues for all of my IMWX, Red Caboose, and Intermountain AAR box car kits, and started assembling some of them.

In the process I'd do some quick research on each prototype to see what I'd like to change. If parts were needed, I'd make a list, order the parts when I can, and the model is waiting for the next time I get back to it.

It's easy enough to model this by shaving off the door track, using the door from the Intermountain Modified 1937 AAR Boxcar, or any other appropriate appropriate door made for a 10'6" IH car, and fabricating a new door track from strip styrene.

Further examination on some of the cars, such as C&EI and ERIE, is that they used early Camel door fixtures, the same as the ones on the 1932 AAR cars. The problem, however, is that there isn't a tall Youngstown door available with those fixtures.

Note that the door track is below the bottom of the body. Also note the early Camel door hardware, recognizable by the angle of the door operating mechanism with the quarter circle guide behind the handle.

Compare the location of the lower door track and the later (and more common) Camel door hardware on NH 30000 to C&EI 64103 above.

On CN 477155 you can more clearly see that a portion of the side sill channel is visible beneath the lower door track. This car also has the more common later Camel hardware.

So I made one. I started with the top of the Intermountain Modified AAR door since it's taller and had the correct corrugation pattern for the doors I needed. I used the bottom of a Bowser door from their PRR X31 box car model. Unfortunately, the door was too wide, so I had to slice a piece out of the middle of that. 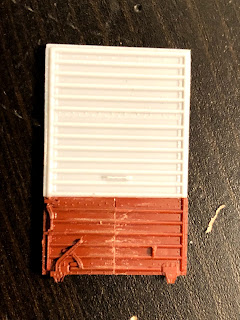 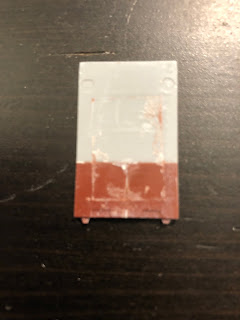 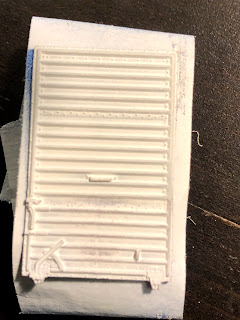 After priming it to see if I needed to fix any issues with the seams.

So I'll need a few of these (or at least one more!). Eventually I may try casting some, or have Chris or somebody else cast them for us. I'd be happy to send them to somebody else to cast if they'd like to make them more widely available.

For reference, here's what I've been able to compile on cars with these fixtures. There are probably more. Most of these are not the tall door I kitbashed here.

It appears that the AAR cars built before September 1937 generally used early Camel door fixtures. Of course, this explains why a tall Youngstown door isn't available with these fixtures. For the most part, cars with a 10'6" IH weren't being built until after this date.

Best I can determine right now is that these fixtures were used on the 1932 ARA Box Cars, and on many cars built in the '30s, including some single-sheathed and double-sheathed composite cars. There may be earlier prototypes, and are probably additional cars rebuilt in the '30s that used them as well.

Unfortunately, none of these fit the IMWX, Red Caboose, or Intermountain 1937 AAR Boxcar models as is. They are all too short. So they don't work for the KCS, NKP, SP, UP, or WP cars that had the door track mounted in the location on the models. Another experiment, perhaps!

Incidentally, the Viking roof used to be available from Des Plaines Hobby, but it appears they are sold out. They also packaged IMWX and later Red Caboose kits with the Viking roof for the appropriate prototypes. I have a few of them, and they crop up on eBay relatively frequently.

Additions, deletions and corrections can be noted in the comments and I'll update the list.