So one of the things I've been trying to narrow down is when the switching crews go on duty in New Britain. At the Chicagoland RPM Jack Ozanich presented a clinic on Railroad Work Rules. It was very informative, discussing how the union agreements affected work on the railroad. For example, the pay for through local freights is higher than through freights. But if a through freight stops to do switching, if they pass a certain threshold, then they are paid the local freight rate for the entire run.

Since the railroad wouldn't want to do that on a regular basis, I decided to dig a little deeper in the documentation.

I already had the New Haven Agreement with Clerks, Freight Handlers, and Station Employes, so I picked up one for Enginemen and one for Trainmen. 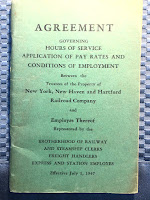 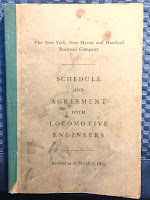 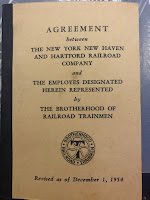 One of the things that Jack pointed out is that there were regular start times for work across the entire railroad. So I checked the books. In the Clerks book:

Rule 53 - Three Shift Positions
When three consecutive shifts are worked covering a 24 hour period at a particular location within a seniority district or sub-division thereof, the starting time of the shifts covered by the employes engaged in such 24 hour operation will not be after 12:00 midnight or before 5:00 AM unless otherwise agreed to by the Management and the duly accredited representative.

While interesting, the Day Train Order station and Agent are at New Britain from 6:15 AM until 10:00 PM, as noted in the Employe Timetables. So that was helpful (and corresponded with information gleaned from several Shoreliner articles), since it established that the three shifts (tricks) were:

The Engineers' book was also helpful:

Article 3 - Yard Service
K. Where two shifts are worked not in continuous service, the time for the first shift to begin work will be between the hours of 6:30 A.M., and the second not later than 10:30 P.M.

Since we know the station is open at 6:15 AM, that the switching crew(s) probably start at 6:30 AM. But I think that they work a staggered shift, because they also have to protect the closing of the freight house at 5:00 PM.

But there are other rules that can help narrow down the details.

Rule C-1. Regular Engineers (still in Article 3)
...all time worked in excess of eight hours continuous service in a twenty-four hour period shall be paid for as overtime...

But as you may know, in this era crews didn't outlaw until 16 hours of service. And many people have stated that the crews would probably work 12 hours each day. If they worked 16 hours, they would have to be off duty for a minimum of 10 hours, which means the start time would have to shift 2 hours every day. But I thought that it would be unlikely for them to be having a local switching crew work overtime regularly. The jobs seem to be fairly well organized. But could I find evidence of this?

Actually, yes. From a Locomotive Utilization Report from April 20, 1948. This was a report that was produced along with a document that was looking at the difference in efficiency between diesel and steam locomotives. That document is interesting enough, but the report is what was useful here. It records the utilization of every locomotive on that day, as measured by miles (for road trains) and hours worked (for yard work).

Two 44 tonners (as usual) worked New Britain. 0802 and 0812. Both switchers worked 8 hours. While this is a single day, it was a single "normal" day and I think it shows (since few of the switchers in the report worked an odd number of hours, a few 9 hours, one or two 11 hours), that the yard jobs were typical day jobs, 8 hours/day.

This is supported further supported by:
D. Yard crews shall be assigned for a fixed period of time when shall be for the same hours daily...So far as practicable assignments shall be restricted to eight hours' work.

E. Regularly assigned yard crews shall each have a fixed starting time...

O. Yard crews will be allowed 20 minutes for lunch...without deduction in pay.

Which means the shifts are 8 hours total, inclusive of lunch breaks.

So in order to protect the 5:00 PM closing of the freight house, the second switcher must have started later in the day. Now the question would be when?

Back to the Engineers' book, this time for road crews:

Article 2 - Freight Service
As noted, engineers are paid based on the type of service (through vs. local), but also by weight on drivers. This matters:

E. ...the total weight on drivers of units operated by one engine crew shall be the basis for establishing the rate.

In other words, due to both service and the weight of the locomotives, the yard crews should be doing the work where possible. Are there exceptions? Yes. The Conversion Rule.

H. Conversion Rule
Engineers, in through or irregular freight service required to pick up and/or set off a car or cars at three or more points, or, when the time actually consumed in pickup up and/or setting off exceeds one hour and thirty minutes in the aggregate for the entire trip during any one trip or tour of duty will be paid local freight rates for the entire service performed.

Rule 21 for Freight Service in the Agreement with Trainmen is basically the same and applies to conductors, brakemen and flagmen in addition to engineers.

There are some exceptions, and an entire section later in the book to clarify this rule, but for our purposes this is sufficient other than to note that we won't need to consider the origination or destination when working through this problem. Here's the schedule for AO-5 in 1946:

First, it's interesting that it doesn't leave Hartford early enough to beat the midnight deadline. So they are paying a day's per diem on all of these cars.

But to determine whether the second switcher would still be on duty at 8:40 PM depends on how many other locations the AO-5 crew would have to switch. Looking at the Utilization Report, Waterbury and Ansonia have switch crews on duty 24 hours/day. It doesn't look like the train picks up anything at Danbury, although there are two switch crews there and on April 20, 1948 they worked 8 and 11 hours (with the second crew also running 106 miles as the Danbury local).

That means there are no crews at Stearns and Hopewell Jct. If Danbury is not switched, then a crew is not needed at New Britain since the road crew would be within their 3 allowable switches. If Danbury is switched, this might be different. So it's quite possible that the crew was gone by this time.

The only other train coming through in the early evening is ANE-1, through the end of 1948.

The yard crew isn't needed for either of these trains. So my assumption is that the last work the second crew does is pull the freight house. When ANE-1/EA-2 were running they would have had to pull the cars up to Track #5 on the Highland, after 1948 the cars were picked up at Whiting Street yard. I don't think this would take more than an hour.

Although they are paid exclusive of a 30 minute lunch, so maybe:

I'll take a closer look at how this will work for an ops session in the next post.