Although we tend to call these Osgood Bradley Lightweight Coaches, I noticed that in the New Haven published promotional materials they called them Pullman-Bradley cars...

Anyway, this is still in a proof-of-concept stage, as I'll need to figure out just how I'll put these back together, and what parts I'll need. This is a test, with strips of styrene behind the side to bring it to the right plane. It's just tacked together with Aleene's Tacky Glue right now. 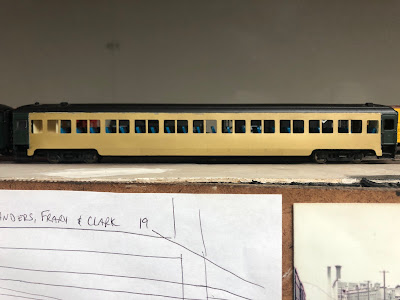 Here it is next to an (as yet) unmodified Rapido car: 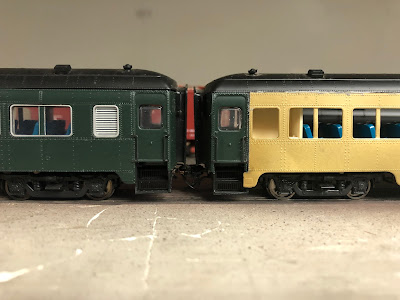 One thing I noticed. If you look at the modified car, the bathroom bulkhead is not in the correct location. I checked the plans, and the location of the bulkhead differs only by 1/8" between the 10-window and 11-window cars. While the windows are smaller (as they should be) on the brass car side, there is obviously a discrepancy of some sort. Since the bathrooms are entirely hidden behind frosted windows, I'll just move the bulkhead. I also need to figure out what seats to get for the new coaches, since they have more. I might test fit a Branchline/Atlas interior (after counting seats). 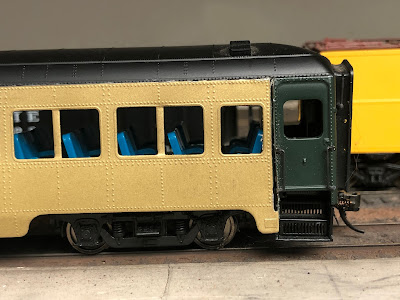 You can see on this end that there is a gap I'll need to fill as well. The best approach would be to add a bit of filler on both ends and center the side that way. Overall, though, it looks like this is going to work pretty well. I need to figure out how to do the window glazing. Most likely I'll just have to put something behind the brass car side, so they won't quite be flush with the car side. But the brass side is pretty thin, so I don't think it will be too bad.
Posted by Randy at 9:29 PM