Here are a few of the schedules from the Arranged Freight Train Service (Symbol Freight) books for the Holyoke freights. While Chris and I have scanned a lot of these,  many were scanned by others. My interest is just in the information, not capturing the original document for the purpose of reprinting, so they aren't always the best quality.
The books have been titled different things over the years, with most of the ones here titled:
Arranged Freight Train Service
Symbol Book No. xx
However, starting in 1952 they dropped the word "train" from the title. Many just call these Symbol Books. I cover the books themselves in more detail here, and the sister publications titled Freight Train & Package Car Schedules here.
We're looking at the Arranged Freight Train Service books here, since they are employee publications that include blocking information and other instructions beyond just the schedules.
Symbol Freights are basically what modelers would call a "through freight." They are technically an "Extra" as is every non-passenger train on the New Haven, but the local freights are specifically called "Extras" on the New Haven in the documentation. The Symbol indicates their origination and termination points. In this case Cedar Hill, with a symbol of "N," and Holyoke, with a symbol of "Y." Eastbound trains have even numbers, and westbound odd numbers, just like passenger trains. So the eastbound NY trains are NY-2 and NY-4.
In most cases, the westbound train is the same symbol in reverse (NY-2/YN-1), but there are exceptions. For example, until 1948 EA-2 is an eastbound Bridgeport to Hartford train, but it's westbound counterpart was the more important ANE-1, the Hartford section of the Speed Witch that primarily (only?) handled L.C.L traffic. Looking at the 1953 schedules there are three Bay Ridge to Boston trains, starting with FGB-2, then GB-4 and GB-6, but only BNE-1 (Boston-New England - also a section of the Speed Witch) back to Bay Ridge. Everything else would be folded into NG-1, NG-3, and NNE-1 at Cedar Hill.
On a railroad the size of New Haven, there weren't too many symbols to remember: 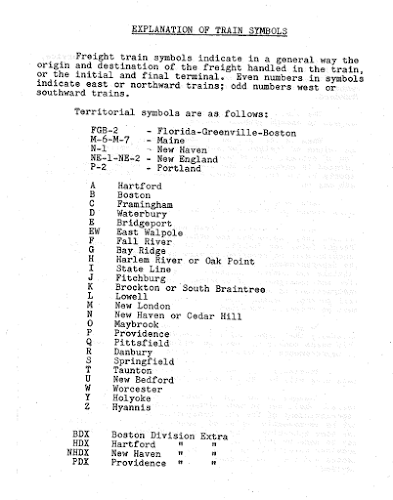 You'll note that railroad timetables are in standard time (by law). They had to issue a new timetable in April and September to account for Daylight Savings. Since the railroads operate under standard time, the schedules differ by an hour between the two. While there are occasional extra passenger and employee timetables in some years, and in other years Supplements (updates) between the main timetables, I haven't seen any such supplements for freight schedules.
I have a couple of pages of what is supposed to be Freight Train & Package Car Schedule No. 75 with a date of July 1, 1946, but the Arranged Freight Train Service Symbol Book No. 75 was April 28 of that year. I haven't seen the actual Package Car Schedule that was copied, so I suspect that's incorrect information.
These are just a piece of the puzzle in our research. As noted below, these schedules have information regarding locomotive classes for each job, but that doesn't always match the Engine Assignment books, nor the photographic evidence. Of course, exceptions always existed, such as when a locomotive was being serviced, so a photo only documents a specific day. I tend to work from the Engine Assignment books backed up with photographs where possible to choose what locomotives I'll model for a specific job. The information in these pages is a decent substitute when those aren't available. Practical considerations (like how many locomotives I'll actually buy or modify) are also a factor in that regard.
NY-2
Of interest is that it handles perishables for Meriden and New Britain, along with merchandise (L.C.L) for New Britain.
In 1946 the route is rated for a J-1 and DEY-5 (Alco S-2) with the same tonnage ratings.
By 1948 only the DEY-5 is listed, and in the April 20, 1948 Engine Utilization Report, it is DEY-5 it is 0605. By the September, 1948 Engine Assignments, DERS-2b (RS-2) is listed, with J-1 3011 noted as D.S.F (Dumped Save Fuel) in East Hartford also listed for NY-2 (for reserve).
By the 1949 schedules, the DERS-2b locomotives are assigned with increased tonnage ratings, through at least the April, 1953 issue (which I haven't scanned yet). Interestingly, the September 1952 Engine Assignments list DERS-2c (RS-3) locomotives 532 and 533 as assigned to the job, but the ratings haven't been updated in the freight schedules yet (as they were for other jobs handled by RS-3s).
I don't have the Arranged Freight Train Service books for September 1953, or 1954, but in NY-2 is still listed in the Freight Train & Package Car Schedule books.
April 28, 1946 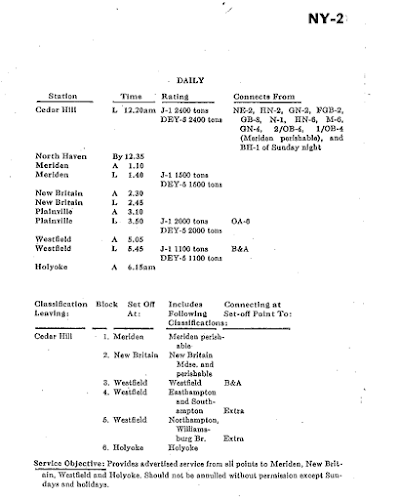 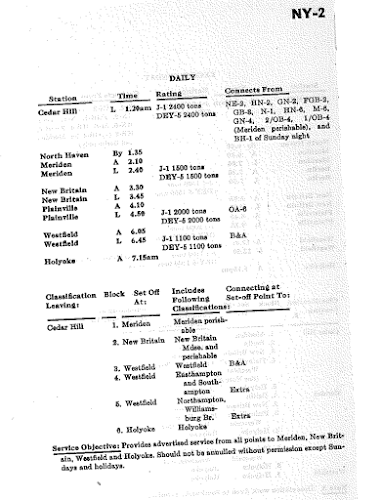 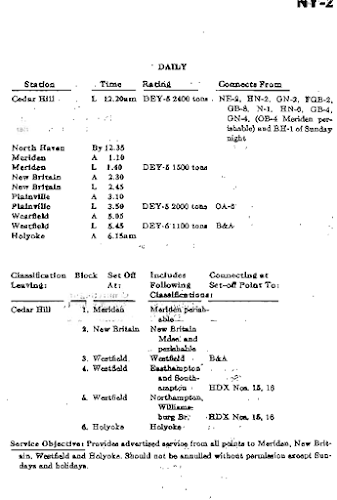 September 29, 1949
After accounting for Daylight Savings, this is now running an hour earlier. 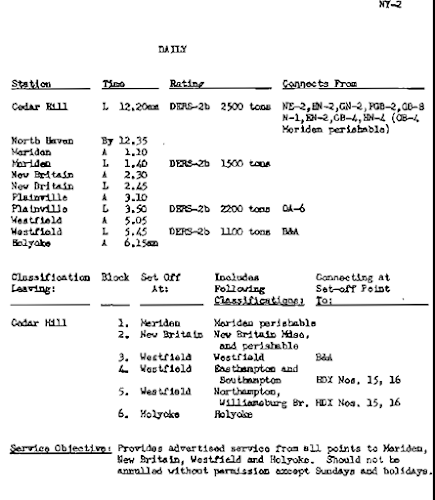 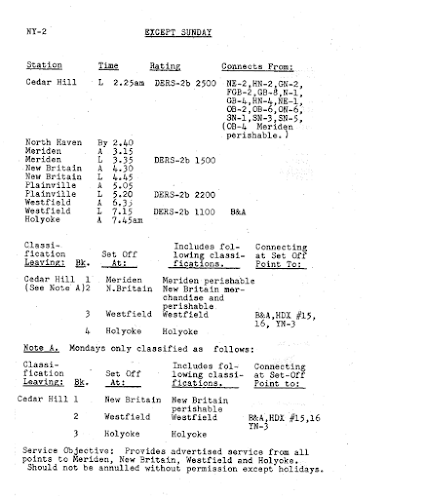 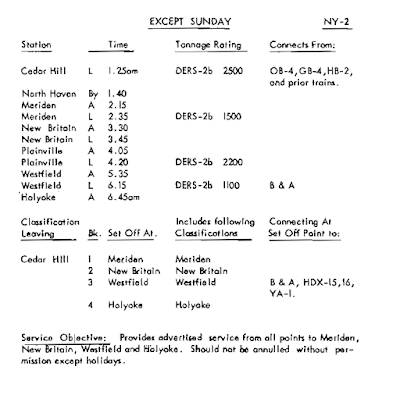 NY-4
The locomotive ratings are the same for all of these trains throughout this era. However, in the April 20, 1948 Engine Utilization Report, we find that DERS-2b 0502 is already handling this train, at least on that day.
NY-4 (and YN-3) were eliminated by the September, 1953 freight schedules.
You'll note that this train serves as the local for most of the Canal Line north of Plainville (Avon to Southwick).
April 28, 1946 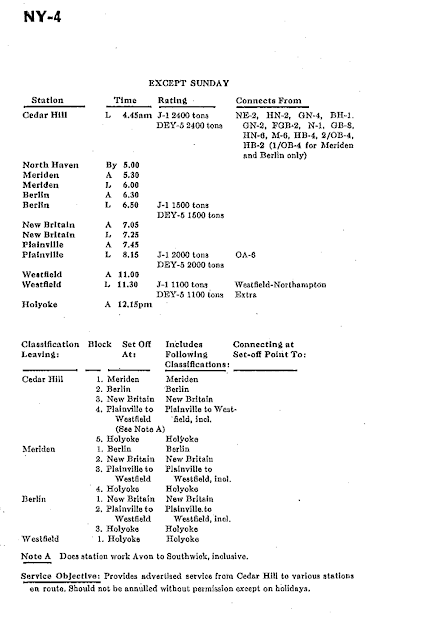 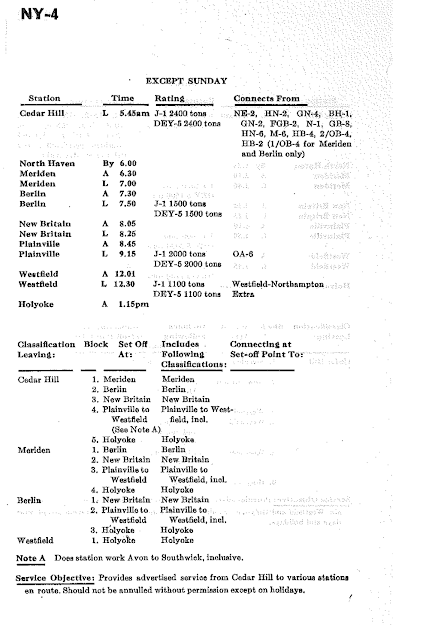 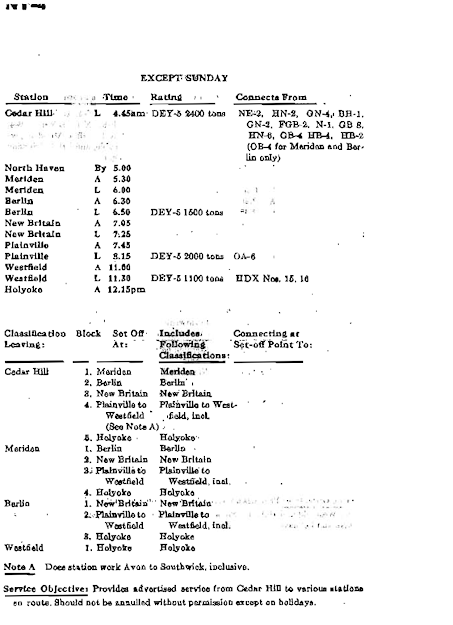 April 24, 1949
Note that NY-4 also serves as the New Hartford Local on this schedule. 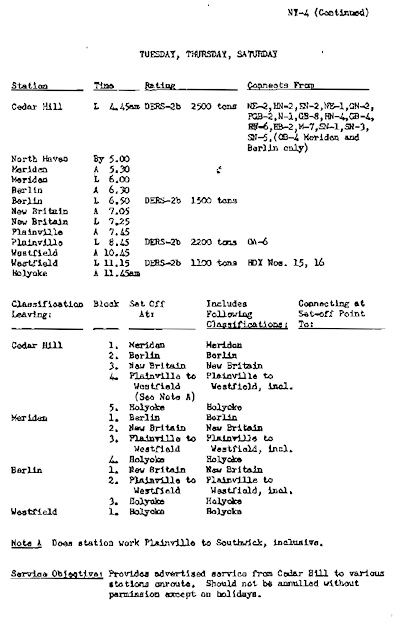 September 30, 1951
After accounting for Daylight Savings, this is now running about an hour later. 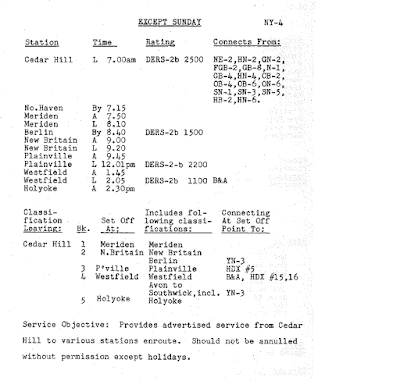 YN-1
As the return of NY-2, it protects a the closing of the Holyoke and New Britain Freight Houses, along with the paper companies in Holyoke and Acme Fast Freight in Meriden. The Freight Train & Package Car schedules published the time it took for advertised L.C.L service from points on the NH to certain specific destinations. The blocking instructions here highlight some of those, such as Philadelphia Transfer as described in this post.
September 29, 1946 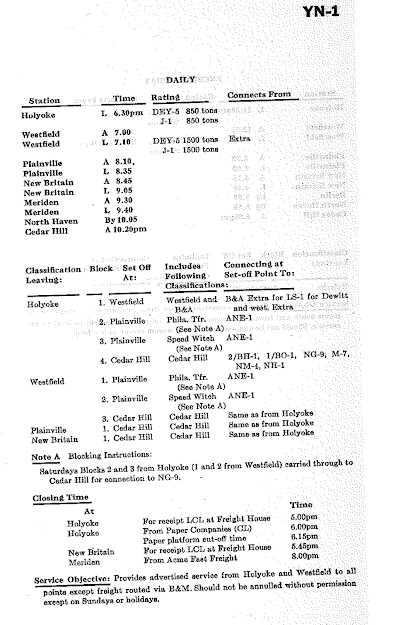 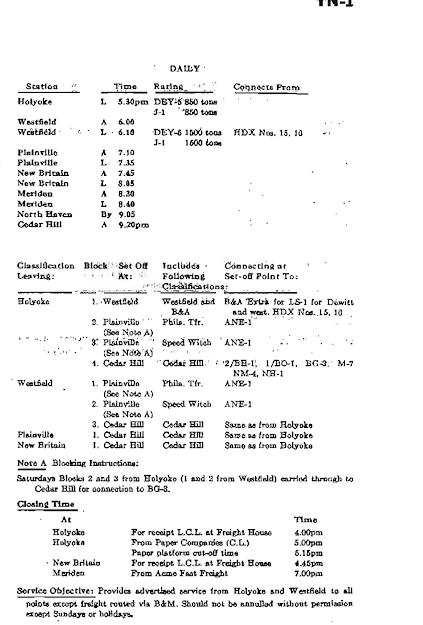 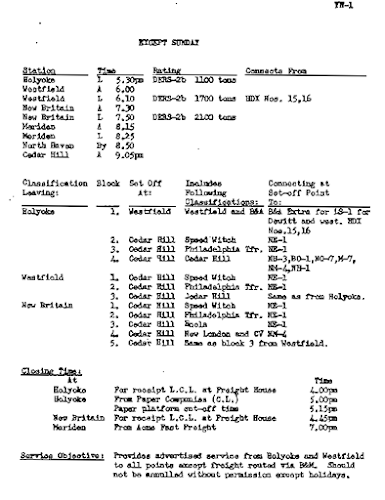 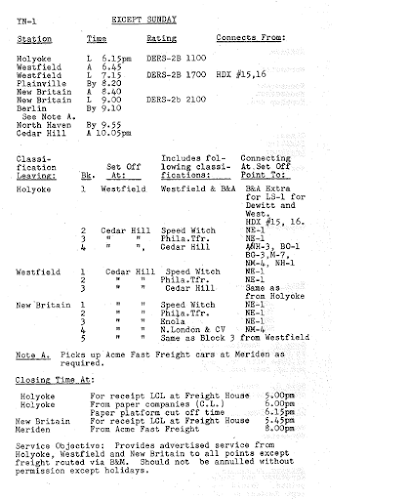 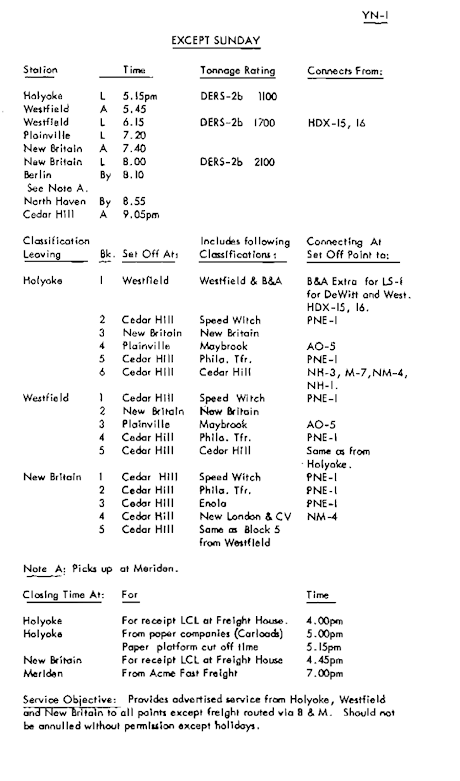 YN-3
The September, 1946 schedule doesn't mention it, but the other schedules note that YN-3 also switches Berlin and Cremo Brewery in New Britain (on the Springfield line just north of Berlin station). Along with NY-4 it was eliminated by the September 1953 schedule.
September 29, 1946 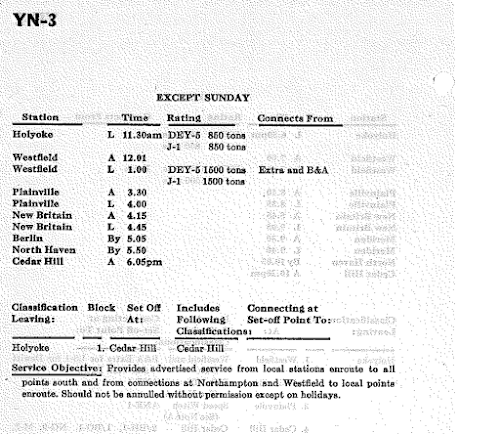 April 25, 1948
After accounting for Daylight Savings, this is running an hour earlier. 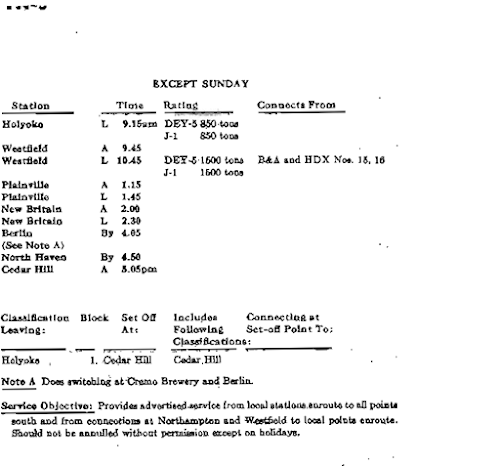 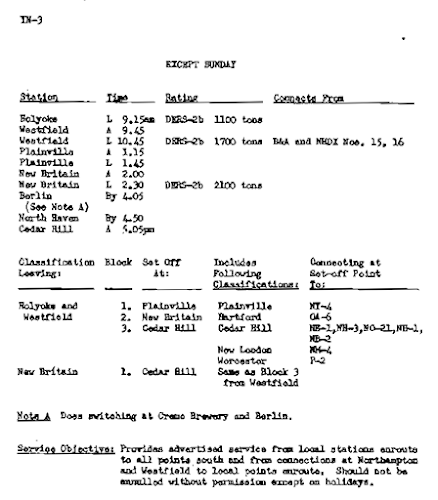 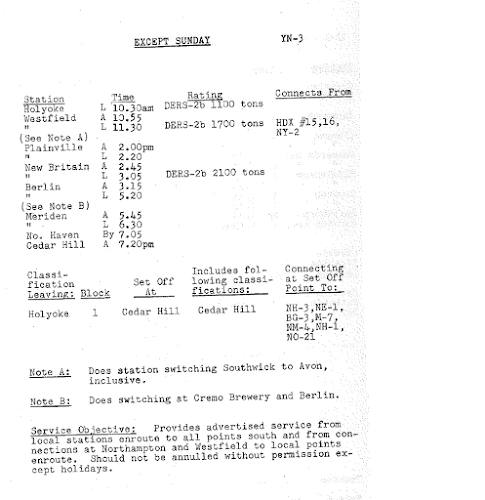