The railings on the Proto 2000 models are very fine, and appear to be to scale. So why would I want go through the trouble of replacing them with etched parts?

This crop of 0937 taken by Ed Ozog shows the end railing matches that of the Proto 2000 model. The lower portion of the railing curves back up and attaches to the pilot above the uncoupling levers. 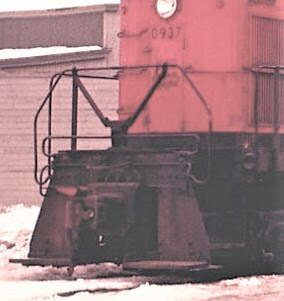 On the remaining locomotives, the railing continues straight, with a right angle turn to attach to the pilot just above the step. This is visible on this crop of 0994, photographer unknown. 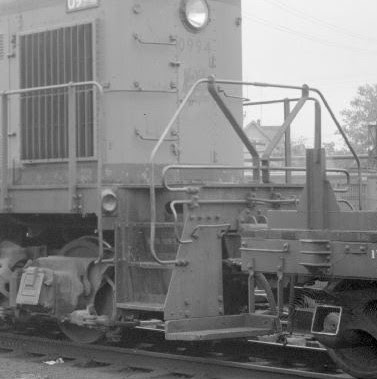 Otherwise, the rest of the arrangement appears the same.
So that leads me to checking out the etched parts as an alternative. But they are slightly larger stanchions than the P2k ones. In addition, they have the additional detail of the two rivets on either side of the stanchions (not just the ones that attach the stanchions to the frame). Plus, I just like trying different things and expanding my skillset.
Posted by Randy at 1:31 PM