Not an Ops Session

Last night Chris, Bruce and I convened at Bill's to test the new layout. Today Bill posted on Facebook a reminder that 7 years ago the four of us dismantled his old layout, taking it out in pieces through the window of the second floor bedroom while it was snowing. That layout lives on at Bruce's and I've mentioned many times how influential that layout (and Bill) have been in my modeling.

Jason has threatened to fire Bill if he has an operating session before Jason. Obviously this isn't an ops session. Just several guys running trains. With a schedule. And switch lists...

This is a test, it is only a test.

Looking down the right aisle. The Delhi branch is the lower deck, with scenery well underway along with many of the structures. The upper level is Sidney (not started yet), along with staging on the right wall (also not started). If I recall, Chris and I were over to help start the benchwork 15 months ago or so. 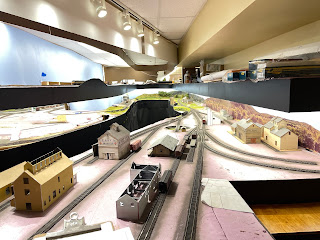 Chris and Bill working on the first problem of the night - getting a second throttle to work. Bill has an NCE Power Cab along with an SB5 booster. The booster is supposed to remove the limitation that the Power Cab must be plugged into the same location all the time. As it turned out, the SB5 supports 6 additional throttles, with cab numbers from 1-7 only. Bruce and Chris both brought throttles, and we just needed to change the cab number to be in that range so they would work.
This is the second aisle of the layout, with Walton the major town on the lower level on the right. It continues around to a helix off to the left of the photo, then continues around the upper deck to Sidney in the other aisle. 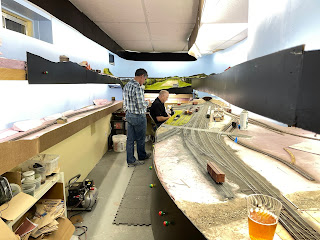 Bill and Chris still troubleshooting the throttle problem, back in the Delhi aisle. 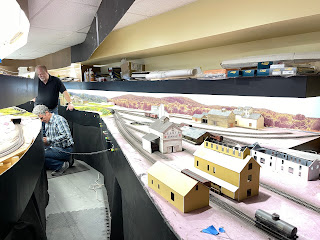 Bruce and Chris are running the Delhi local, coming out of staging here. 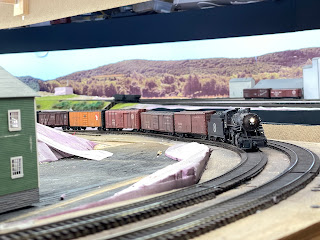 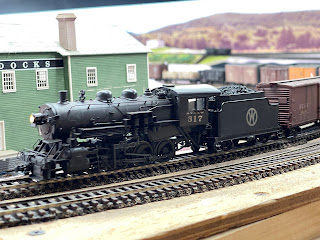 After coming around the end of the peninsula from staging, it goes through the wye in Walton to come back over the staging it just left. 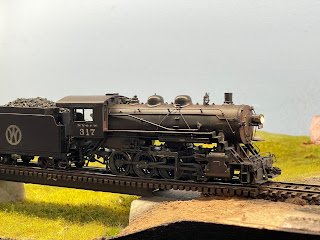 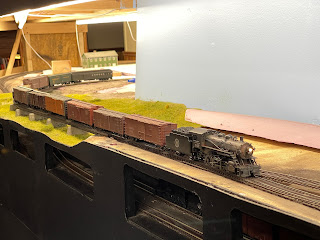 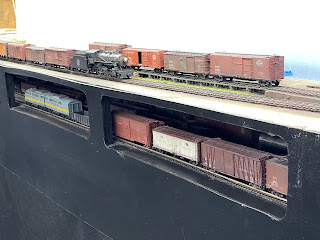 In the meantime, Bill and I ran a through freight around the entire layout other than the Delhi branch. 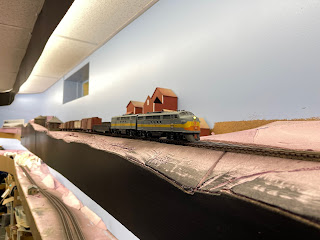 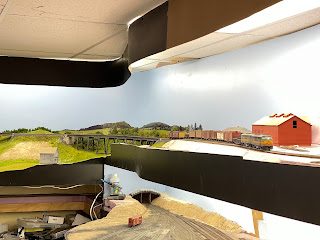 Another look at Bruce and Chris running the Delhi local. 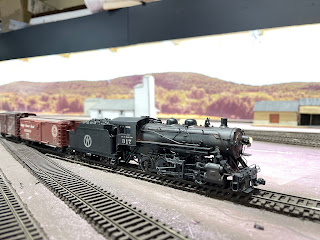 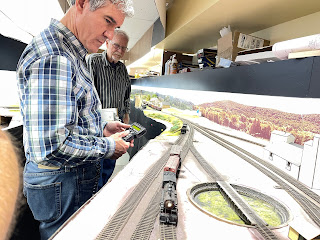 Walton station. Bill purchased a laser cutter last year since he has so many buildings to make. Of course, it doesn't hurt that he's responsible for the line of laser-cut buildings that Branchline produced. 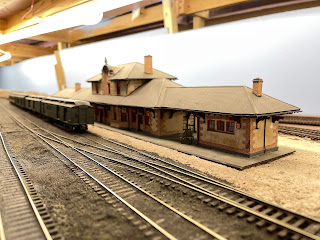 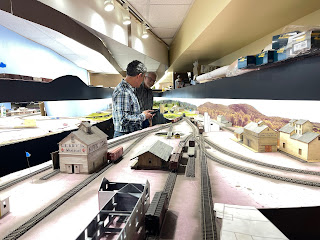 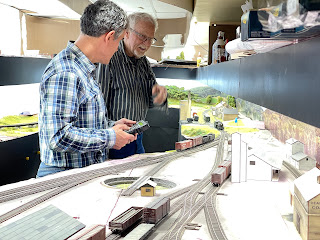 Bill and I ran a local with one of Bill's camel back steam locomotives. We wanted to test the primary steam since it's likely to be the most finicky. (It was). 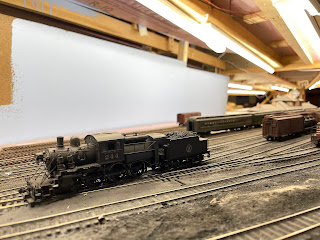 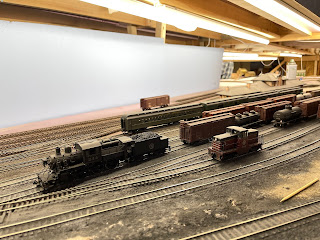 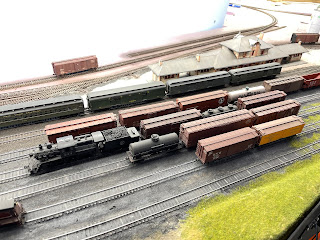 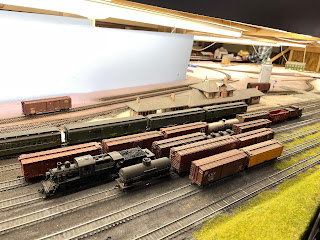 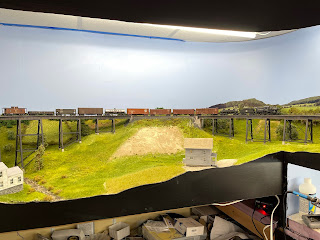 Overall things ran quite well. There is definitely some work to be done with the turnouts, almost all of which are Microengineering. Chris and I haven't really had any issues with them, but we have found that the gauge is sometimes tight between the frog and guardrails. That seems to be the case here, particularly with steam. It's an easy fix with a file, and the tight tolerances means that once it's corrected they will be very reliable.

For fun here are some videos.

There was a lot of joking around and chatting, but when our through freight was approaching the trestle it was pretty quiet so I decided to take this video. Bill's running the train at this point.

This is more like a typical initial shakedown session. I was also attempting to run the train and take a video, and decided it wasn't working. Overall things ran much smoother than this implies.

And this is a glimpse of what it's like when the four of us are together. I tried very hard not to laugh while taking the video. I took this from the vantage point of somebody in front of their house in the valley.

Here are links if the videos don't show up: