Poultry Cars on the New Haven?

Rick Abramson (see his layout tour here and part 2 here) asked a question on the NHRHTA Forum about whether live poultry cars operated on the New Haven. My initial response was going to be, "If we know that the New Haven shipped this (at least once), certainly poultry cars ran on the line."

But then I started to dig to confirm what I knew (and didn't) and as usual, the post grew... 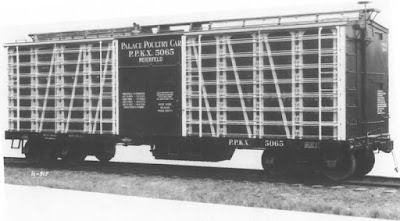 The problem is, with so few of these cars, the 1% data may be incomplete and inaccurate. This would imply that there were only 100 carloads in 1949, all destined to New York, and 400 in 1948. Could this be correct?

Unfortunately, I haven't been able to find complete waybill analyses prior to 1948. Time to find some other sources.

The primary resource regarding live poultry by rail is an article by John H. White, Jr, (the senior historian for transportation at the Smithsonian Institution) published in Agricultural History 63.3 called Home to Roost: The Story of Live Poultry Transit by Rail.

Kristin Dummler also posted an excellent clinic on the history and modeling of poultry cars. Kaylee Zheng has also presented clinics on these cars.

These resources cover the history of the cars and their use, so I'll focus on the question: did poultry cars run on the New Haven?

I'm not sure baby chicks are included in the Live Poultry classification. Because they didn't need to be fed for 72 hours, they were shipped in boxes the same day they hatched, via Railway Express Agency. And many of them from the New Haven.

Here's an Along the Line article from June 1942 where it notes that Hall Brothers Baby Chicks in Wallingford shipped 16,000,000 chicks that year: 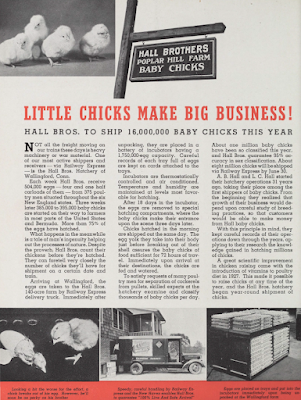 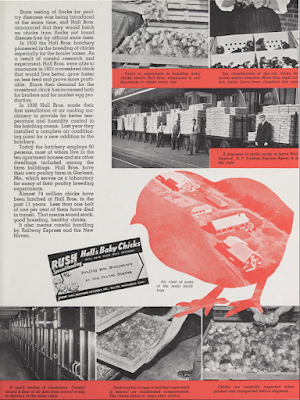 But that doesn't address the question of live poultry cars.

Live chickens, turkeys, pigeons, and probably other poultry used to be shipped by rail. As noted by John H. White, Jr., the late '20s saw an average of 12,000 carloads nationwide annually, with 2,800 live poultry cars in service headed for most major cities in the country. In 1928 51% of live poultry was shipped by rail. By 1940ish it was down to 27%, lost primarily to competition by trucking. The WWII spike was 3,376 carloads in 1944.

In terms of the poultry cars themselves, by 1947 there were only 237 cars, and only 15 in 1950. The low quantities listed in 1948-9 are reasonable, although probably a bit below the actual totals due to the low number of cars and shipments.

John's article notes that a survey history of the industry published in 1973 indicates Live Poultry car service ended in 1956, but the railroads continued to report live poultry shipments until 1961. I can't find any Live Poultry cars listed in the 1953 or 1954 ORERs. Regardless, with only 15 cars remaining, the live poultry by rail business was all but over by 1950.

Of the live poultry traffic, he reports up to 60%+ was destined to New York City. Fleshing this out are some statistics I pulled from 1921 Legislative Documents for the NY, NJ Port and Harbor Authority mentions that the majority comes via the Lackawanna due to a special poultry facility at Hoboken that transfers the poultry to trucks bound for the West Washington Market, and over 175 local chicken slaughterhouses throughout the city.

A 1936 edition of Decisions of the ICC in 1933 notes 73.5% of all live poultry movements via rail were to New York City, this was 67.4% in 1934. Of those, 66% of shipments originated in Illinois or further west. Live poultry sourced from farms closer than Illinois came primarily via truck.

An AAR Report on Poultry and Dairy Products from 1947 indicates that 79% of the national live poultry traffic was destined for New York City in 1940, but this was down to only 38% in 1944, with terminations in Illinois rising from 4% to 21% during the same period. In this report it also notes that the number of terminations is too low to get reliable statistics for individual destinations. This is because the source of the carload data would be the annual 1% Carload Waybill Analysis, but it highlights how this data was used in numerous reports and studies produced by the AAR, government agencies, and industry groups.

John also mentions that "much of the live poultry shipped to New York, Boston, Philadelphia and Washington originates in the Del-Mar-Va peninsula." This statement (because of that "Del-Mar-Va peninsula" wording) appears to be taken from the 1947 AAR Report. Of course, traffic destined for Boston from Delaware, Maryland, or Virginia would very likely have been routed over the New Haven.

He notes that New York City was the largest market because as much as 80% of the live poultry in NY was destined for orthodox Jewish households, which is confirmed in several of these other sources. The 1918 issue of Traffic World reports that Italians in New York City also preferred live poultry to dressed. It also mentions that poultry cars would often be loaded as L.C.L and make multiple stops along the way to pick up more birds. Interestingly, the national fleet at the time was 891 private cars and 114 owned by railroads. It doesn't specify which roads owned live poultry cars, though.

The New Haven railroad also served large Jewish communities in (West) Hartford, Norwalk, Bridgeport, and New Haven in Connecticut, Worcester and Boston in Massachusetts, and Providence in Rhode Island, among others. They would require the same live poultry deliveries as New York City, although local New England farms could have addressed much of that demand, but perhaps not all. As roads and trucking improved in New Haven territory, these could be served from local as well as centralized sources.

The reports have specifically mentioned Boston, and even some of the tables have included data for that city, although not data that I could use to derive carloads for live poultry. It would be nice to find some confirmation for other cities on the New Haven.

Is there anything we can find in New Haven published documents? Poultry cars would have been a very small percentage of New Haven traffic, but they are mentioned in various freight documents.

For example, the 1927 Instructions Regarding Car Reports (replaced in 1944 by a simpler document that just lists station numbers) identifies abbreviations for each type of car to be used on car reports. Live Poultry is listed here (LP) as is Palace Horse (RK). Both rare moves but still noted in the rules.

This 1948 booklet covering a lot of rules for freight also has information regarding live poultry cars. 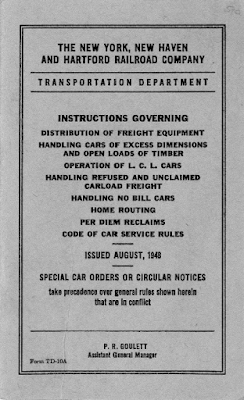 In this case Rule 11 notes they (along with tank cars) must be re-weighed and re-stenciled only by owners and are excluded from some of the other rules on light-weighing and stenciling because of this.

In most freight rules they would fall under the "live stock" category and aren't called out individually, neither are beef and swine. But rules such as these examples show that at the very least, live poultry cars were expected to be on New Haven rails periodically.

Live poultry is mentioned in a November 1928 article about the new Harlem River express facility in Along the Line. No details, just that it is received. I'm sure there are probably other mentions through the years. As an express facility they could be referring to baby chicks.

This is confirmation that such cars did run on New Haven rails. Unfortunately, that's all it provides, the car miles traveled. No destinations.

A December 1946 report/proposal to build a new wholesale market for fruits, vegetables, poultry and eggs and New Haven has some specific information:

"These firms receive the bulk of their poultry and eggs from midwestern sources by rail and truck. Most of the carlot rail receipts in New Haven are received at the firms' rail spur tracks. The volume by rail has shown a steady tendency to decrease during the last 10 years. This decrease has been counteracted by heavier truck receipts. Since 1940 a few of the national packers have built broiler processing plants in New England and the Del-Mar-Va area. Those plants deliver both boxed and ice-packed poultry to their local branches to meet their requirements for fresh-killed poultry."

"...New Haven is the leading poultry and egg market in Connecticut...approximately 120 cars of eggs, 110 cars of poultry, and 60 cars of turkeys of shipped-in supplies were handled by all wholesalers in the New Haven area in 1945."

"Rail receipts were from western production areas and were received principally by local branch houses of national and independent packers. Most of these firms have rail spur tracks from which they can unload their rail arrivals directly into their stores."

Reading through the report, it's not always clearly differentiating between rail and truck traffic when referencing "carlots." So we can't determine the volume of traffic by rail. But it does specifically state that live poultry is received by both rail and truck in New Haven, and it mentions they are delivered on their own spurs. So again, live poultry cars and not baby chicks via REA.

Dairy and Poultry Statistics 1955 shows all live poultry into Boston came via truck from Maine, Massachusetts, and New Hampshire. Rail service is still indicated for Chicago.

From a New Haven Railroad modeling standpoint, most won't need any of these cars. But we can certainly say that occasional live poultry cars to New Haven and Boston are a regular, although maybe not even weekly, occurrence.

Frequency would be higher through at least 1930 and might have picked up again for WWII. But I doubt there were any new destinations, just more traffic. We have confirmation that they continued through the late '40s to New Haven at least, and probably Boston. So those modeling New Haven or the Shoreline, or the electric territory, prior to 1947 can reasonably justify a car or two.

Would they be seen on anything other than Shoreline trains? Perhaps depression-era and earlier cars to Hartford and maybe smaller cities like Waterbury or even Danbury, especially pre-1928. After 1928 trucking would take a larger percentage so I think that by 1940 New Haven and Boston may have been the sole destinations remaining for rail service. Even with the 1946 report, traffic dropped precipitously enough that there were only 15 cars still in service, so I think it's safe to say that they weren't running on New Haven rails by 1950, and maybe gone as early as 1947.