Yes I know it's three months into the year already, but I have some deadlines this year.

The first (but later) deadline is that I will be hosting some operating sessions and an open house for the 2022 Northeast Region NMRA Convention from September 15-18.

The second (but sooner) deadline is the New England RPM which was recently announced for June 10-11 this year. I plan to be on the open house and, with luck, an ops session on the Thursday before.

Before these, though, I have another deadline to meet. I'm doing a quick clinic on the RS-2s on Saturday for the latest Hindsight 20/20 virtual meet. Don't forget to register! 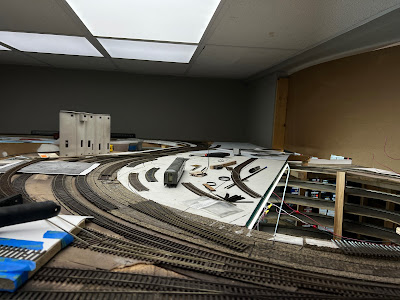 The missing portion of the mainline and the entrance to Track No. 5.
While I may still hand lay these, I'm thinking of testing the new Walthers turnouts.
Not essential, but would be nice:

While I've noted a number of them as "not essential" since we can operate without them, it would be worth getting them done. The Bulk Tracks is probably the most complicated, since it has a swing bridge to get to them. 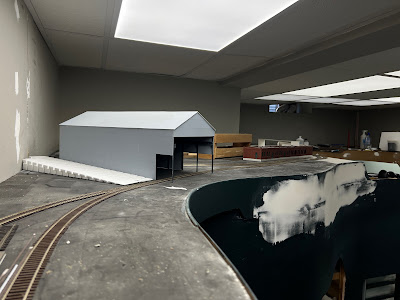 The re-worked Stanley Works is the largest area that still needs feeders.
Not essential

While the turntable won't necessarily even be needed when running the 1953 sessions I expect to run, it is easy to connect. I do want to make some additional locomotive storage tracks there, however, probably with manual switches to turn the tracks off when not using them.

I can work on plenty of others, but these are all I'll need for the ops session. So I need to finish the 44-tonners.

I have the waybills that I have used for prior ops sessions, which is fine, but I plan on making some new ones to provide a little more work, particularly for Stanley Works.

I need to get the ProtoThrottles set up, I'm still waiting for the receiver. I have two ready to go and would like to get one more for the Stanley Works crew. For now I'll most likely run the passenger trains with the regular throttle. I think that will be easier since the runs are short and we'll have to select different power for each run.

Not Required for Ops Sessions

That's all that is technically required, but I would like to have more completed on the layout by September in terms of scenery.

I enjoy this process and, at least around the track, I approach it as a single process. It should go pretty quickly once I get the track and feeders done. I'm still finalizing my process in the meantime and will probably have to take a day to go sift some more ballast. 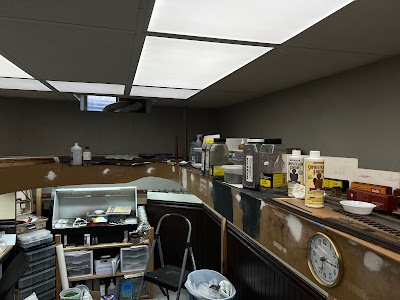 Ongoing ballast/track weathering experiments.
Some other projects/experiments from this photo will be in future posts.

I'm not sure I'll get to switch machines and other small details, although I ought to do joint bars prior to painting/weathering the track.

There aren't too many left to add. I'll need to finish the ones with grade crossings so I might as well do the rest at the same time.

These are simple, well underway, and add a lot to the visual aspect of the layout. This can include other small infrastructure details like electrical boxes, etc.

I'm not sure if I'll finish them by either session, but I'd like to try. At the very least I could get non-operational signals in place, and work on the electronics later. But since I need to make sure the wiring is prepared for it, there's a reasonable chance that I might get them completed by then.

One major aspect to the signals is that the mainline switches need some sort of switch machine to detect their position. This will be much easier to do before I (re) ballast, so should be a priority. The challenging ones will be the ones on the first level of the helix.

But right now I need to go practice squeezing a 90-minute clinic into 30...