Some research for various projects and continuing to clean up the basement brought an old project to the bench. This is one of those projects where each time I've come back to it I have improved my skills to a point where additional progress is possible. 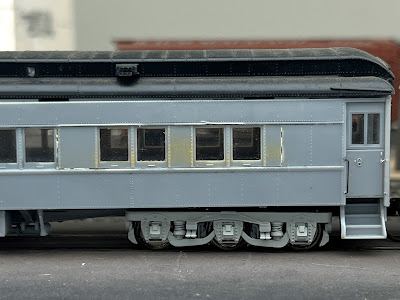 This photo shows a car side I modified the last time I worked on this. It wasn't the first, but the first mostly successful attempt.
Some time ago I started acquiring Walthers parlor cars and attempted to cut the relevant windows out of one side so they could be rearranged to the correct order on another to create a 600-series coach that had been converted from a parlor car. I also tried NERS parts (designed for just this type of project with Rivarossi passenger cars) and Branchline (now Atlas) parts.
At the time, I tried to carefully cut out the windows. While the styrene is soft, it's still a chore. More importantly, the cutting kerf, makes it very difficult to do in that manner.
Here's another earlier attempt (top) with its uneven cuts, a few gouges, and Branchline windows next to a Walthers window. 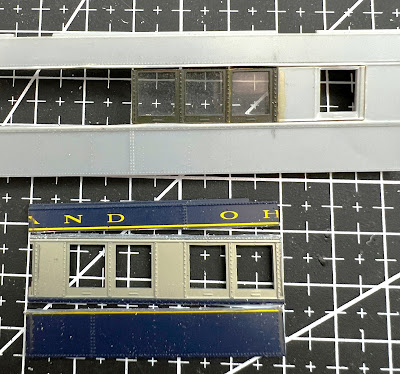 Of course, when I looked at the project now, I have no intention of using the donor side for anything but parts. As you can see from the B&O side, I've cut well around the portion I'll need, and I can file it to the proper size for a much better fit. 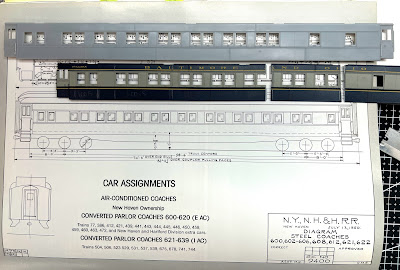 As you can see, I'm using the New Haven sketch published in an excellent article by Wayne Drummond in Shoreliner 21.3. Assignments of the first 20 cars to be converted included the Highland Line, and eight of them were of this design. I need two additional pairs of windows from this car side. 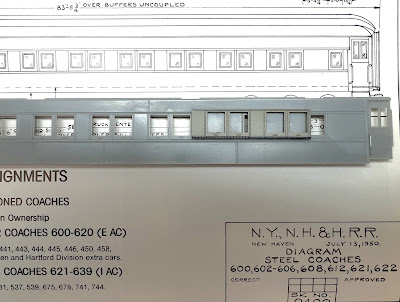 I haven't finished filing them here yet, but this is the location where they will be. 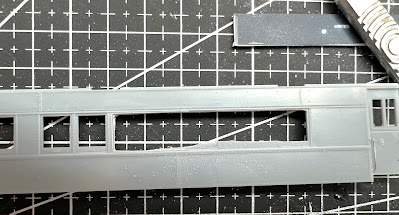 When cutting out the windows from the side I'll be using, I make sure I'm well clear of the details I want to keep, and will file to fit again. 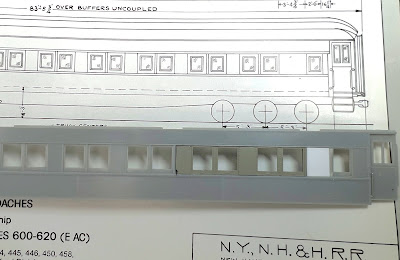 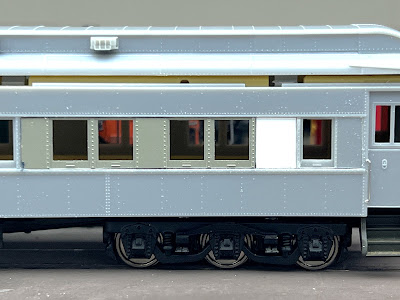 Here it is mocked up on the car side, this time it only took an evening to make. The roof doesn't fit properly yet since it needs to be reversed.
Seen below it's next to the earlier attempt (that used one of the other plans). I'll have some cleanup work on that one to fill the gaps, but I think it will work OK.

Of course, the other side of these cars is the same as the Walthers kit as is. On my layout you can only see one side of the cars, so I could have just gone the easy route. But I'd prefer to run these sides as the visible ones, since I find their heritage interesting and they are cars unique to the New Haven.
It also turns out that they will be more important cars than I originally thought. While the consist books show the 8270-series 11-window Osgood Bradley lightweight cars in addition to these heavyweights, almost every photo or video I have of passenger trains on the Highland have heavyweight cars. These were replacements for the older cars that I'll also be modeling. These would have run from 1949 until the trains were replaced with RDCs in 1952-3.
Posted by Randy at 6:50 PM