Coming around the helix you and you'll be at the start of what is continuous industries. I've made a few modifications here. The two tracks in the front of the photo with the hopper and the tank car are Hardware City Fuel. I moved these over to make room for one additional track, for the City of New Britain, with a chlorine tank car. 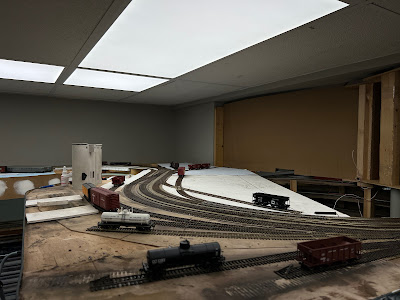 The more obvious change is the addition of two tracks connected to Track No. 5 on the far side of the main tracks. These are DK Coal and Miner, Read, and Tullock. I had been postponing these because of the diamond crossing in the middle of them. I used another of the new Walthers turnouts (24' and 20" radius curved) for Miner, Read and Tullock.

The 30-degree crossing is from the excellent new Diamond Line from Fast Tracks. 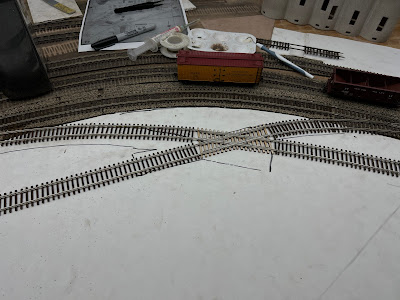 While it probably needed a different angle, and at least one of the tracks curved through the crossing, I didn't want to handlay this one. Not just because of the challenge, but this product is the first that actually looks like a prototypical crossing, with cast parts.

I deviated from the design, though. It comes with pieces of rail that you install and then solder to PC board ties at the far end to keep everything in gauge. Instead, I trimmed away the last few wood ties and removed several ties from Microengineering flex track, then slid the rail into place in the castings. The ME track keeps itself in gauge, and it also let me curve the tracks right up to the frogs. 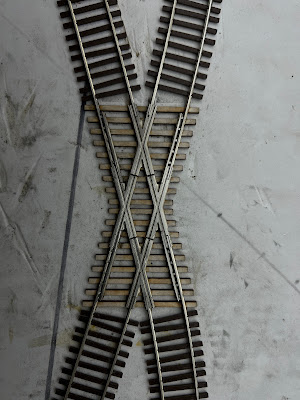 I'll fill the gaps with styrene. I need to get a Dual Frog Juicer or some other autoreverser to power the two inner frogs. 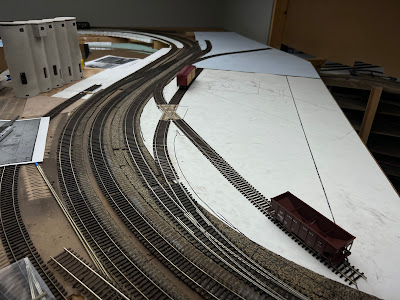 If these were available when I built the tracks for Shurberg and New Britain Lumber, I definitely would have used one. But that is set quite a distance away from the fascia and is already in place. I'll look at potentially changing it, but I don't think I will at this stage.

In this section, the only track that needs to be completed now is the Stanley Svea track that extends past the Household Fuel silos and onto a curved trestle. It won't stop me from being able to operate, but I'd like to finish that relatively soon too.