Finishing up the trackwork. I've frequently said, "don't be afraid to make changes."

A few years ago, I extended Track No. 5 coming into the main portion of the layout. The initial idea was to extend the track as far as I could and provide a point where the eastbound freights could shove a cut of cars. To do this required creating a level track because it's at a point where the helix is already descending. It also gave me an opportunity to put in a nice retaining wall for the track separation.

When I later made modifications to the backdrop so I could include more industries on the north side of the tracks, it also meant I could more easily include the East Main St. crossing.

The problem was now that there was only room for 2-3 cars before the East Main St. crossing. Either the freights would have to shove the freights all the way past E. Main, meaning the rest of the track was pointless, or I needed to find a different solution.

I decided to install a new entrance to Track No. 5 so that it would start just to the west of East Main. That left a portion of this track for an industry. 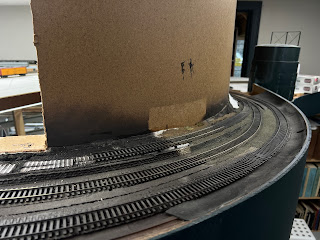 The plan was to use that for United Coal Co. In this section of town there are a lot of coal dealers, and there will be D&K Coal right across East Main St. In fact, in this section of about a half mile there were six.

This industry would be tough to fit, though. In addition, it would be serviced right off the Main, instead of off of Track No. 5 like it should be. It's also the only industry track in this section leading into the helix, and it's also in a narrow aisle between the two helixes where the Stanley Crew is normally working. Not a great setup. Out it comes. 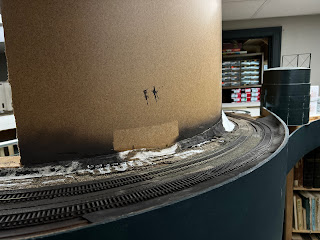 Shortly after I did, I was working on the industrial tracks on the north side of the main tracks when I realized that the crews would have to enter the main to work one of the industries. At this point, if Track No. 5 were extended, it would operate as a lead for the industry. In addition, the crew could come all the way from the yard on Track No. 5 and not need to enter the main at all. This is, of course, also prototypical. It just extended further for several other industries before connecting to the main.
This doesn't need to be level, and ideally the turnout shouldn't be as far around the helix (although it will still be on the back side). I suspect it will be rare for the crews to use it, though.
As far as cuts of cars? I've decided they'll just have to use the portion starting at the crossover. This should be long enough and will have to do since I can't install the full length of Track No. 5. The reality is, eastbound trains really left their cars on the west side of town, on a track about a mile from the yard. Since that entire portion doesn't exist on my layout, it's a compromise no matter where I spot the cars. 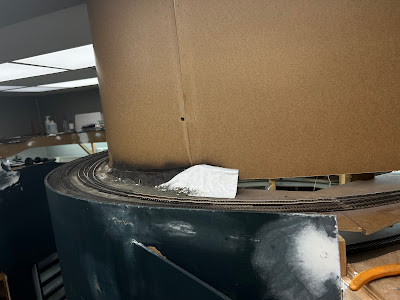 Working backwards from the turnout for the first industry, I used a full piece of flex track for the lead, which determined the placement where Track No. 5 will now start. Although I really liked the retaining wall, it was tough to get that extra vertical grade smooth from the end of the turnout to the top of the level portion. With this turnout closer to East Main St., it would need to have been redone anyway.
Here's looking toward New Britain, and it what you see when entering the main portion of the layout now. I also reconfigured the two tracks for Hardware City Fuel to allow space for the New Britain City Works track (to receive chlorine tank cars, among other things). More to come. 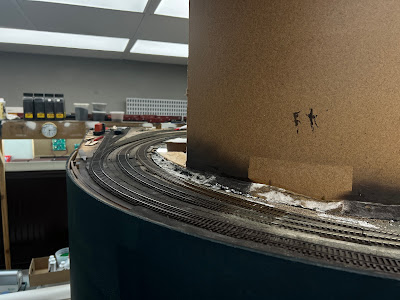 The two turnouts in this location were the old Shinohara/Walthers ones. I needed curved turnouts with a 26" or 28" outer radius. I could have handlaid them, but these were much faster. The two primary issues I have with them is that they are Code 100, and the points aren't sprung. Obviously, the details themselves are nowhere close to Microengineering, but I felt that based on the location I could live with that.

But Walthers just released their new version. They are Code 83 and have sprung points. Like the old ones they are 28" outer radius and 24" inner. Although that 24" is less than my mainline minimum of 26" they have been well tested in this location and have worked fine with my equipment.

Overall I think the Walthers turnouts are decent. For most modelers they will work well, although if you're particular about accuracy, not so much. The spikes are still quite large. Also, since they made the points out of continuous rail there are sections of the ties that have no wood grain.
I also found it odd that on a brand new track product that first thing you have to do to install it is remove the first tie at the end of each track (and then they recommend purchasing their extra ties). Microengineering has a tie that's slightly shorter, and has no spikes so you don't have to remove any ties. At the very least they could have designed it so it didn't have that final tie (even better would be to include three of the extra scenic ties too).
There are holes for spikes. Most are between the molded spikes next to the rail. So the placement is better, but there are still a bunch of holes if you don't spike/nail your track. A better option would be dimples on the bottom of the ties to drill out if you choose to go that route. That has been done before too.
While a lot of people will like the continuous rail points and it's appropriate for a lot of modern track, it's not accurate for my era. The rail is thinned as it gets to the end, which means it flexes too much to flip the points by a finger if you aren't close enough to the throwbar.
I would have liked to see them put a little effort into making them more accurately, and finer details overall. That's primarily a research/design thing and wouldn't have added any cost to the tooling.
The diverging rails are electrically connected to the stock rails, and with continuous rail points there won't be a concern for losing conductivity. The frog is dead, but there are two places (one underneath, one to the side of a tie) to power it if you'd like.
Mechanically they are decent and I don't have any concerns in that regard. But the overall design in terms of details and certain things, like the need to remove a tie, feels a lot more like a product designed 20-30 years ago. Not something I'd choose to build a layout with, but good enough for a few special needs.
Posted by Randy at 12:17 PM