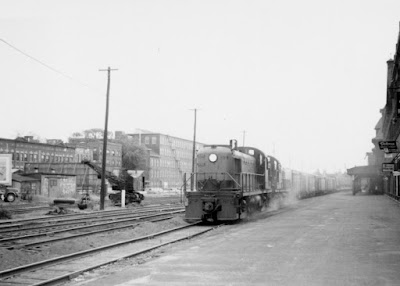 DERS-2c (RS-3) 529 with a circus train in New Britain c1954. K. Cochrane.
I think this is during the summer of '54 when the Highland Line was single-tracked.
I've been working a lot of extra hours lately, we're getting ready for vacation, and I'm still working on rebuilding the main website, among other things. Plus it's mid-year so it seemed a good time to take a step back to refocus my efforts. Usually I would be doing this about this time after the NE Prototype Meet.
I do want to finish those flat car models, and paint more, but the primary focus needs to be getting the layout fully operational for ops sessions. A lot of time will be spent on the layout and basement.
Another thing I need to work on locomotives. There's a good chance that I'll have a friend do the decoders, not because I can't do it, but it's time consuming and I'll be putting that time into other projects. I'll still need to detail them as well.
For now, the focus will be solely on diesels, since they will be easiest to get running. That narrows the focus to 1949-1954, but the reality is that the line was single-tracked in the summer of '54, so if I'm sticking with November, I'm really modeling through 1953.
The goal is to be able to start some sort of Operating Sessions in September.

This is the obvious starting point since it's only the 44-tonners and RDCs, and priority No. 1. I'll plan on one major locomotive project per month, and I should be able to complete this in August.

The other years require quite a few more locomotives. This is probably the easiest in terms of the amount of work to be done to get them ready. I'd like to get these done by the end of the year to be able to add a more complex session.

There are two locomotive projects, a bit more involved:

Only one additional locomotive project.

This will be last simply because I'll need to custom paint and get custom decals made for the Comet. Other than that, all the other locomotives needed will already be completed.
To model operations for any year other than 1953 will require cabooses and passenger cars as well. I'll work my way through those lists in another post or two.
Posted by Randy at 9:07 PM