To be prepared for ops sessions, I'm also going to need to finish some cabooses. I have some information as to which cabooses to use, but there are some holes in my current research.

For regular trains (such as a local freight), a caboose was frequently assigned to a specific conductor/job. The conductor was responsible for ensuring the caboose was stocked with all of the supplies required. By always having the same caboose, they could set it up to their liking and not have to remove their belongings/supplies at the end of each run. So there is quite a bit of consistency once some data is acquired.

The first information I had to work with were the caboose assignment books for 1950, 1951, and 1953. Photos are useful to confirm or fill in holes in information, but unfortunately the caboose is often not identifiable since people tended to take pictures of the locomotive.

Here are a couple, though: 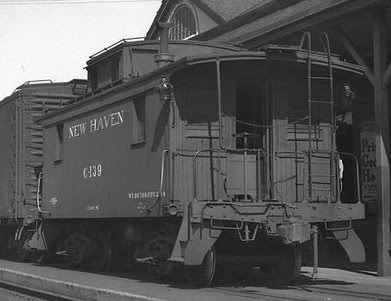 C-139 on YN-3 in Berlin c1946. Kent Cochrane
In this photo the train was hauled by an I-4, it could have been earlier. This was fortunately taken from the back end, and an earlier shot of the same train had the caboose right behind the locomotive.
In another Cochrane photo of YN-3, this time in Plainville on July 7, 1947 with DEY-5 (S-2) No 0606, it has an NE-5. Unfortunately, I can't make out the road number. 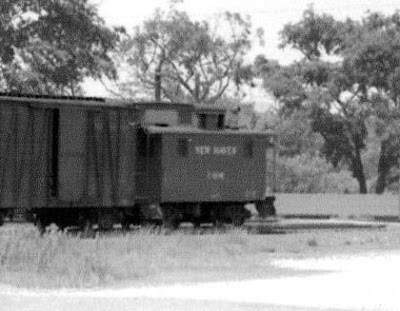 So I built a small collection of cabooses, a couple of NE, an NE-2, four NE-4s, five NE-5s, and five NE-6s. But once I narrow the focus to trains that will run during diesel-only ops sessions, I end up with only four potential trains:

So a lot fewer cabooses than I thought I'd need.

Only one NE-5 and up to four NE-6s. It's interesting that these are the final four NE-6 (or any for the NH) cabooses. I could get by with one caboose for NY-4/YN-3 and reduce that by two cabooses. At some point I'll need to add one or more NE class cabooses as well, but it's looking less likely that I'll need an NE-4. But I can cover 1949-1953 with only three cabooses:

I'll get into the details and the modifications I'm making to these in future posts. But here's a list of what I think are the most accurate models of these classes:

I haven't examined any potential NE-3 caboose models, I don't even recall if one has been released. I'm not finding one with a quick search.

The NE, NE-2, and NE-4 cabooses need only minor corrections, although none of them have an interior. Ironically, it's the NE-5 and NE-6 models that need the most corrections.

I'll probably work on these in August/September since I don't have too many to do (and I've completed a lot of the work already).