My plan was to keep up my posts through vacation (and usually I have some done ahead of time), but that didn't happen. Things got hectic, Emily had a medical emergency, Laura lost her wedding rings in the ocean, and yet somehow we still had a great vacation.

Fortunately, Chris has been posting again, including some very helpful ones for when I get my ProtoThrottles.

In the meantime, here are three related photos, all flat cars loaded with engines at Pratt & Whitney. 3D printing folks, here's a new load for you to make!

Based on the notations on the shipping containers, it would appear they are these types of engines, built between 1944 and 1955.

The photos aren't dated, and two of them are of the same car. 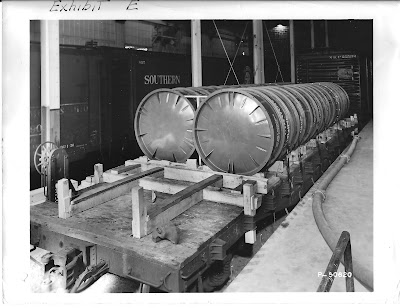 Those two are labeled Exhibit E and Exhibit F, so probably part of a claim of some sort. Sure enough, in Exhibit E, NH 17259 is missing a coupler knuckle. This flat car is the Speedwitch kit.
The B&O car was reweighed in 1-50. Most cars had to be reweighed after repairs, but no later than 30 months. However, starting in 1949 this was extended to 48 months. So this could be any time between 1-50 and 1-54. No road number (well, it includes "90"). But closer inspection reveals a double door car. Since the left door looks like it may be the same size as the right, it would be an M-27A class car, once produced by Sunshine, although their model has Youngstown doors instead of the Creco doors seen in the photo. I don't know if the kit comes with Creco doors as an option.
We can also see NKP 22212. This is a steel double-door auto car. I'm not aware of any available models for these cars. 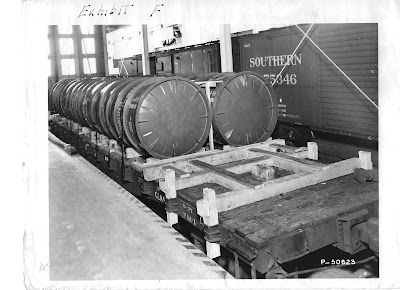 Exhibit F shows us that Southern 75346 (assigned to New Orleans Terminal, I think. Note the "NOT" in the upper left corner) was reweighed 12-48. So now the date of these two photos is between 1-50 and 12-52. In addition, we can see the missing knuckle on the deck. I believe that the road number is actually 375346, part of the 375000-375499 series, originally assigned to the NO&NE subsidiary (still lettered "Southern"). Sunshine produced the models (although I've never seen the "NOT" lettering). I still love the way these cars look.
So it's interesting to note that in the Wikipedia article it says these engines were the first product produced at the P&W Kansas City, MO plant. It doesn't indicate whether they were only produced there, but it's quite possible the two related photos were photographed there, and the photos sent to NH to document the need to replace the coupler (since they would likely charge the NH for the repair made to their car). 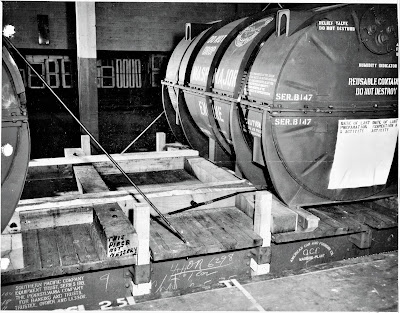 The other photo is an SP flat car, but the car number isn't visible. This seems to be unrelated to the other two photos, other than it is also a P&W Wasp Major engine load.
Note the handwritten "this piece isn't necessary" on the end of the center board. I think this photo was taken for a different purpose, to update their process for securing these loads. There isn't anything in this photo to identify the date (unless somebody has S/N production records for the engines, which is clearly visible). The diagonal bracing behind the flat car resembles that in the other photos, although the markings on the loading dock don't match.
The other thing that I find useful is the general condition of the decks. They aren't heavily damaged or weathered. We can't see the color of course, but if you examine the SP car closely, you can see the tongue and groove in the end of the deck boards. The New Haven car doesn't seem to have this feature.
Posted by Randy at 5:41 PM