John and I took a little road trip to Selkirk and the surrounding area. I'd never been up there, but John went to college (and met his wife) in Schenectady.

They yard itself is basically inaccessible to railfans, although we stopped and walked up an overpass to watch a bit of switching from a distance. Of course I didn't take any pictures there (duh!), but a long freight of auto racks was getting prepared to run west so we decided to head down to a grade crossing to get a better vantage point.

We went further down the road to Voorheesville which has parking for the rail trail right at the crossing. The rail trail is the old D&H line, and this is right about where it crossed the NYC/B&A There were several other railfans waiting here and we caught a small train that appeared to be a clean-up job and probably the last for the morning/day.

After that we went up to a point where the line crosses the tip of Watervliet Reservoir at Twin Bridge. There's a pair of single track bridges built at different times, although one clearly has a pier for a double track. I don't know if it was built as a single track, but the design itself is really interesting. 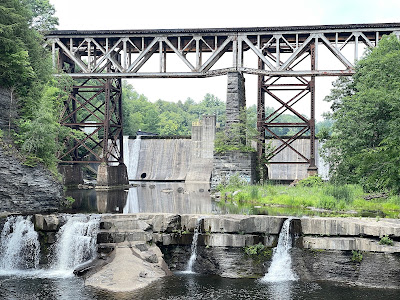 I'm not sure what to make of the truss, or the angled lattice structural members at the pier. It would be quiet interesting to model, it's such an odd looking bridge.

For my AML buddies, we had lunch at one of John's old favorites, Slick's in Schenectady. I think I could have made four sandwiches with this. It was delicious. 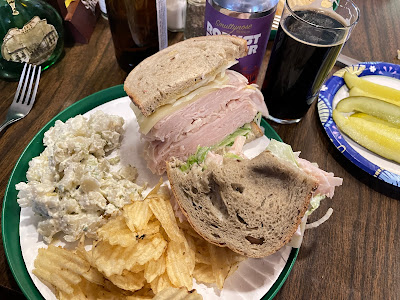 We also caught a couple of Amtrak trains on the way, but I didn't get pictures/videos, plus saw another freight at a distance headed by a couple of NS units.
It was great checking it out, but even better to be with somebody who knew the area and the history.