Yep, I'm a couple of posts behind. Things got a little busier than expected since Emily's nurse ended up not being able to come on vacation this year.
The biggest post-vacation/summer push is to get the layout running. There's quite a bit of work on the layout and the room to get that going, but progress is good.
Just so I feel like I've made some progress, here's a shot from February 2010: 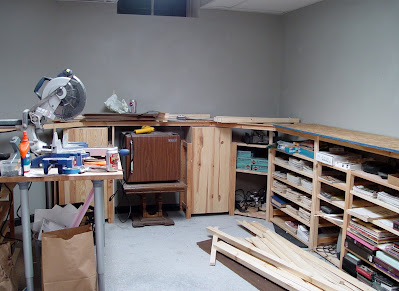 Often building a layout seems like two steps forward, one step back. But the overall progress is forward. So what's the plan for August and into the fall?

I have all of the lights that need to be installed in the ceiling, and just need to install them. I've come to the conclusion that it's probably best to hire an electrician, but that takes a bit project out of my hands.

I have a turnout that I need to hand lay to complete rebuilding part of the mainline. That east side of town also needs new feeders, I want to get that running so I can start thoroughly testing the mainline with passenger trains. It may need some tweaking. After it's running well, I can let trains run while working on other things.

Stanley Works and most of the west side also needs feeders. I also need to finish the coal trestle for Russell & Erwin.

There's some track to lay for the turntable, and then wire everything there, plus some feeders in staging to address. That will take care of the main layout.

The Berlin Line in its entirety needs feeders, and I need to lay rail for the bulk tracks.

I want to get the track scale operational, which requires the installation of some sensors.

I have more of the racks to install for paints and supplies, along with general clean-up and organization.

So while there is a fair amount of work (outside of locomotives, cabooses and passenger cars as I've been covering), I think that a lot of this can get done within 30-60 days. The trackwork is largely redoing what was running before (just better), so it will be good to get back to that point, but I think it's the lights that will feel like the biggest step forward.