Pontoons on the NH

This is a series of pictures of gondolas loaded with containers  pontoons on the New Haven.

Jack Consoli noticed the Navy Pontoon markings on them, and provided several links in the comments below. I'll leave my comments on container loads here.

There is a long article on container loads in this Freight Traffic Report, you'll need to go to pg 311 (the actual page number is 186) for the start.

Chapter 8 of this book is also very interesting, but it's a preview, so some portions are not available.

I'm not sure I recall seeing any in service photos of containers on the New Haven, so it was nice to get a small collection of them. They all seem to use the same types of containers, and one I haven't seen before. I don't know if these were purchased by the New Haven and these are outbound. Perhaps this is a record of a test. In any event, they are shown loaded into gondolas from several roads. 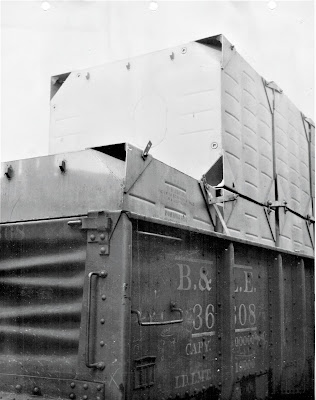 Here's a B&O gondola of an unknown road number. The journals were repacked in July of 1943, and the repack markings are pretty clean. There's a nice collection of chalk marks too. 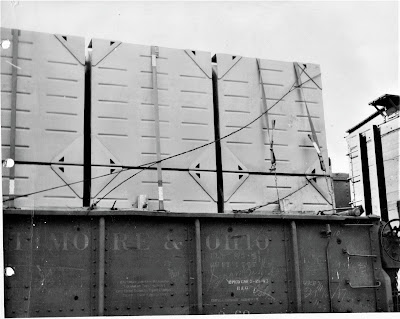 This is one involved in an accident, reporting marks are not visible. 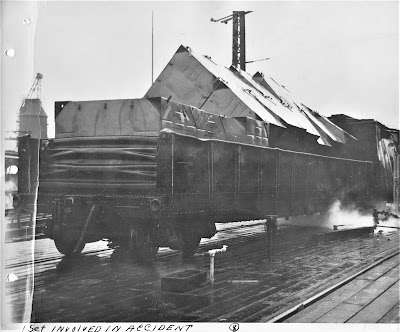 Canadian Pacific, repack '43. Note the white ring painted around the hole for the brake release rod.
"Note broken bands & wires" is written under the photo. 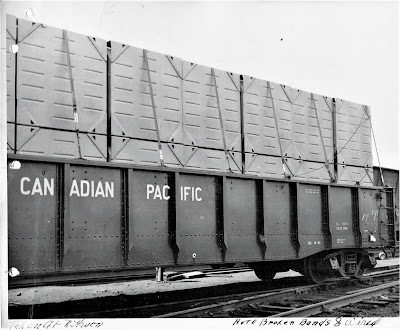 Southern, repacked in '43. It's a 65' 0" long mill gondola. While Southern purchased some AAR Standard 65' gondolas, that was much later than this photo. 65' gondolas were also considerably narrower than shorter gondolas to maintain clearances. Compare the amount of space between the sides and the containers with the photo of the CP car above. 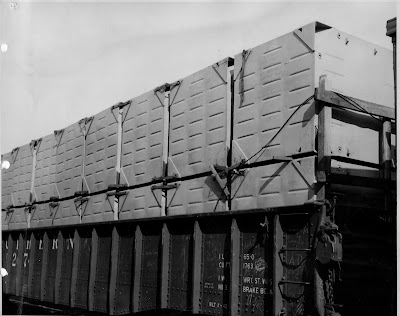 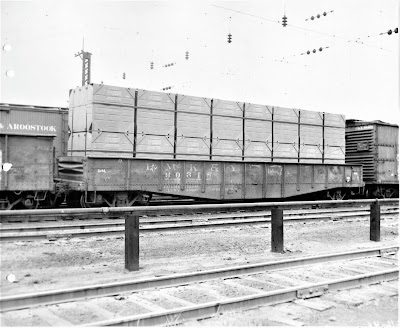 Note Alton (C&A) 38802 next to it.
Obviously these pontoons wouldn't have come my way, but what's not clear to me how widely containers were used. For example, I don't know whether they would be likely to show up in New Britain. I think the biggest surprise for this group of photos was the number of different roads represented. Unfortunately, there are no HO scale models in plastic or even resin kits for any of these classes of gondolas as far as I know.
The Rapido 52'6" mill gondola looks close to the CP one. The only version I've seen has a 1953 build date, and has external tie down anchors on the exterior, which aren't on this particular prototype. I don't know if the ends differ, but otherwise they look like they are very similar cars.
Posted by Randy at 9:57 PM