More photos of open-top cars from the collection Dick provided. Prior posts are here, here, and here.
These are three that show mishaps. 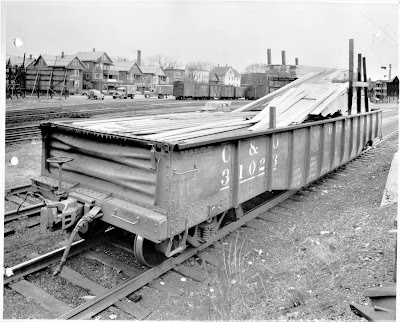 C&O 31023 with a lumber load that has shifted. There's another car with a lumber load behind it too.
I don't have a lot of info on this class of cars. In the 1950 ORER the 31000-31549 group numbered 500 cars. A note indicates they have low fixed sides, solid bottom and drop ends. They are 48'6" in length and look a lot like shorter versions of the Greenville design gondola that is available from Walthers (ex-Proto 2000). There are rivets in a few places that leads me to believe there are collapsible stake pockets inside.
Unlike the model, there is no stiffening rib at the extreme ends of the sides, and the two shorter ribs don't have much of a taper, if any, at the bottom. On the model the ribs are also tapered at the top, and this doesn't appear to be the case for this car. What I find particularly interesting is that there only appears to be a single grab iron at the right end of the sides, where we would typically see 4 or so. The interior height is 3' instead of the 3'6" of the Greenville 52'6" design, but the height of the side of the car is about a foot lower (6'5" instead of 7'4" from the rail).
Sure enough, checking the C&O Historical Society Archives they have several photos of 29900 (1, 2, and 3), part of the 29900-30099 series built by Greenville in 1939 and have the same dimensions and appearance.
But a closer look at their list of resources shows they also have pictures of 50-ton gondola 31466 that haven't been scanned yet. But it indicates they were built in 1939 by ACF. It appears they were built to the same design, with minor differences. For example, the coupler buffer and brake step.
Note: Modeling buddy Mike Clements tells me that Richard Hendrickson showed how to kitbash the earlier class of this gondola in the November-December, 1982 issue of Prototype Modeler. Normally you can access this issue at TrainLife, but it appears there is a technical issue right now.
Fortunately, I have it. Here's the diagram from that issue: 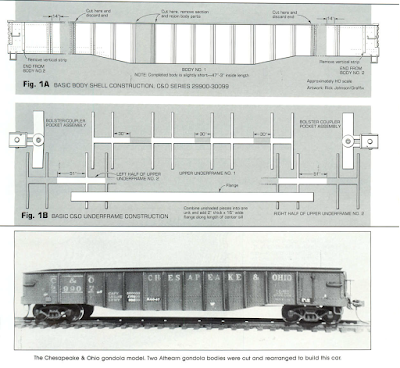 I might start with the Proto 2000 model at this point, but the process would be similar. Might I add that this is one of the primary reasons I post. I know that there are folks out there that know things I don't. and I hope that they'll share.
Thanks, Mike!
--
I can't make out the road for the next two pictures (maybe PRR?), that show the load was perhaps a little heavier than this car could handle: 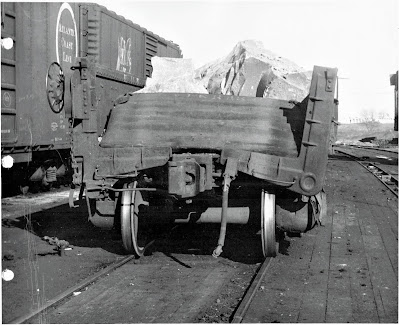 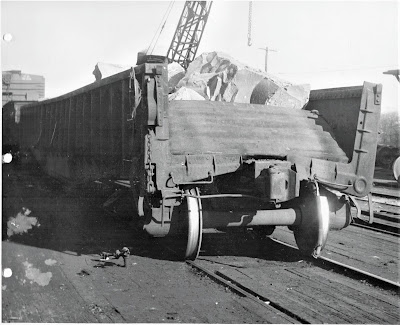