One of the "industries" to receive cars in New Britain is the Town of New Britain itself. The track is often labeled as New Britain Water Works on older maps.

I don't have any pictures that give me any information in regards to what might have been received here. Aerial photos from 1934 and 1951 are inconclusive, although it doesn't appear there is anything in regards to structures or tanks. 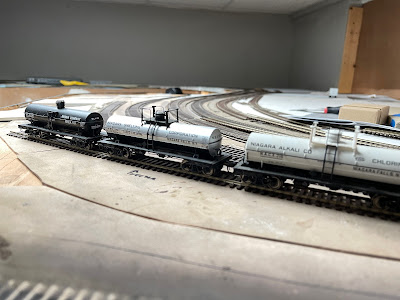 My thoughts were that it functioned much like a bulk/team track, where the town would receive shipment of bulk goods, such as chlorine for treating the water and road salt for the winters.

In Jeff's Wilson's Industries Along the Tracks 4, there's a chapter on salt. I had already learned that NY state was a significant supplier of salt during the era. I figured that road salt would be a good choice for servicing the town side track. But Jeff indicates that the widespread use of road salt didn't begin until after WWII.

I found this report that confirms this. So salt isn't likely, but what I didn't know is that sand and cinders were used to provide traction, prior to the widespread adoption of salt.

I was also able to find some information regarding the use of chlorine in city water. This was widely used by my era, and the volume of chlorine that would be needed for a small city of 75,000 people would certainly make delivery by rail a possibility if not likely. I haven't been able to find definitive information that the chlorine used in city water treatment would have shipped in tank cars, but that's my current guess.

What's not clear is how the town would have received the chlorine if it's coming in tank cars. Since this track is often labeled as New Britain Water Works, I'll go with the idea that there is some sort of unloading pipe. It's also possible that if they did receive chlorine by tank car that they unloaded them directly into trucks.

While it would be nice to find some definitive information as to what was received on this track, in this era sand, cinders, chlorine, and also shipments of asphalt, crushed stone, gravel or cement would all be reasonable bulk shipments to a large town or small city. In Jeff's book there's a picture of a gondola being unloaded by hand into dump trucks at a bulk/team track. That's a lot of shoveling.

Many towns might just receive such goods at the bulk/team tracks. But for a small city like New Britain, shipments must have been fairly regular and having their own track makes sense.