But I have found a few other prototypes that would be easy to make from the Tichy car.

Here's an obscure one - LOP&G RR - the Live Oak, Perry & Gulf Railroad received 30-ton flat cars in 1914. It has the shallower center sill.

What I find interesting is that these were built in the same year, both by Magor, but the Navy cars had straight center sills of 15" steel channel (the side sills were 12" channel) and the LOP&G car had 10" channel side sills with a fishbelly underframe.

There were a whole bunch of truss rod flat cars that could also be done that I haven't really explored as none would be in service in my era.

These are also 50'-52' flat cars that resemble extended versions of the Tichy model. Jason Hill has some photos of a couple of kitbashes he's been working on with for SP 50'-ish flat cars, including the F-50-10,-11, -12 and -13 classes, and the F-50-14. He hasn't covered how he made the models yet, but his modeling is excellent so I'll be keeping an eye on that as another potential project.

Weathering flat car decks has turned out to be something very easy to do with 5-10 minutes of free time here or there. So I've continued to experiment with different mediums. The techniques are pretty much the same as what I've been doing, although the order often varies. In many cases this is because I get to a point, don't like what I see yet, so just keep adding more layers. 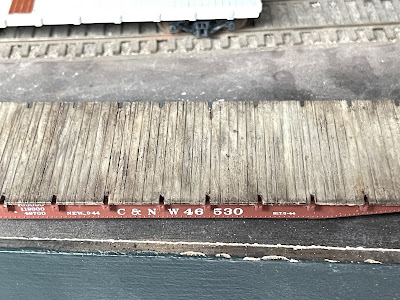 I continue to make a point to take a picture when I complete each step with the materials I used so I can go back to them if I'd like. For something like this it's an imprecise process, so this isn't a "one drop of this, three of that" thing. 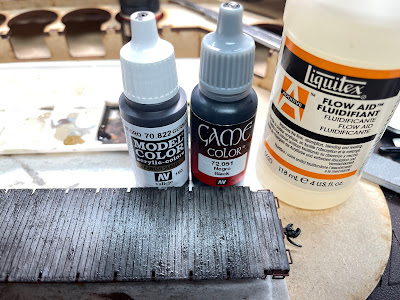 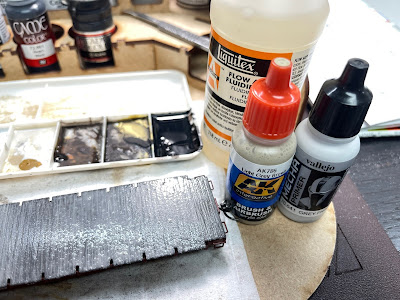 Here are the three P2k cars along with the original two experimental decks outside: 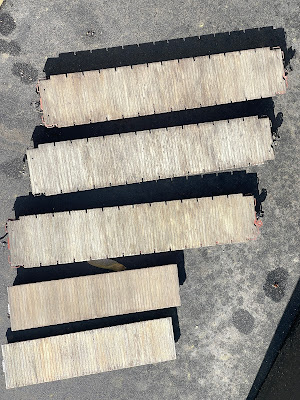 The three P2k decks, also outside: 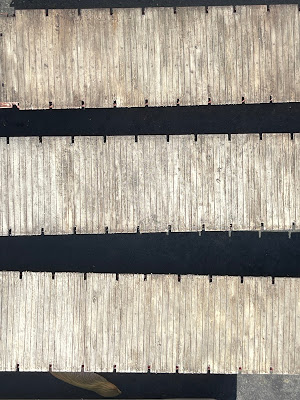 Although I used a different number of steps, and different colors for these, the general approach was the same, and the final effect is quite similar for all of them. On one hand I'd like a bit more variation, but the reality is that only a few flat cars will be on the layout at a given time, and typically not side-by-side, so I don't think it will be that noticeable.
I'm also still on the fence about how much I should distress the decks. Based on photos from the era, it seems that the railroads maintained them better than they did in later years. I also have very, very few color photos from my era. The bottom line is, I'm still undecided on how much I think these decks should vary. They do look more uniform in the photos than in person.

I've also weathered a laser cut wood deck. This is for a Chad Boas kit for an L&N flat car. This kit consists only of the main casting, the laser cut deck, and a piece of paper with few sentences on how to build it, in this case with Tichy stake pockets. I'm not aware of any decals for these, however. In the many levels of resin kits available, this is as basic as it gets. Having said that, they are very workable castings for prototypes you otherwise cannot get. So I have quite a few of Chad's castings and would recommend them.

I used the scalpel to rough things up and dig out some chunks, and started with washes of the Tamiya Panel Line Accent Color. The basic process is really one of staining rather than painting. I did also use the Vallejo Black Wash (75.518). I found that sandwiching the deck between two kit boxes while wet was sufficient to keep it flat.

Here's the deck in progress between the two original tests I did to compare: 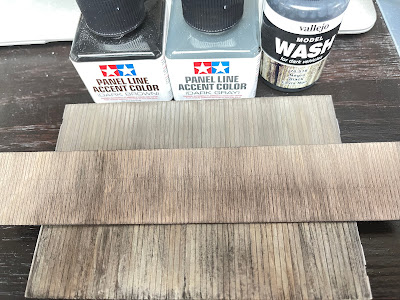 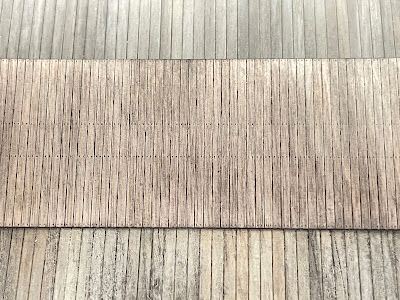 The main difference is that when it looked like things were a bit dark, I sanded the deck using variable pressure so it wasn't uniform, but overall quite lightly. I repeated this process, staining, sanding, distressing, until it's gotten to this point: 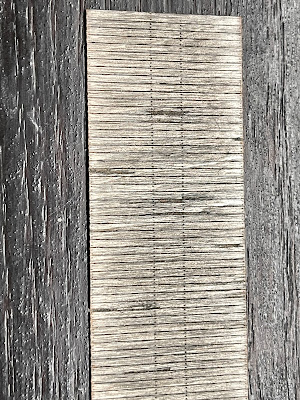 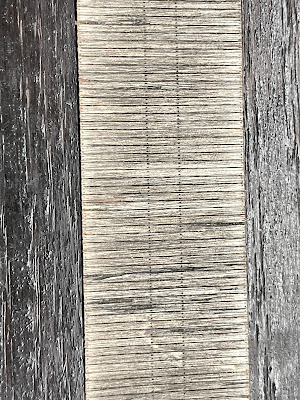 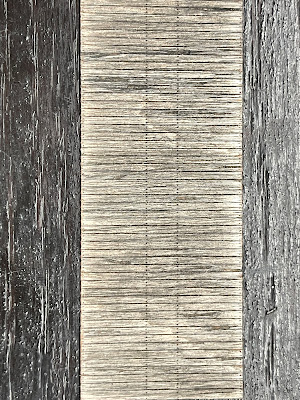 The staining/sanding approach worked out a lot of the natural brown tone of the wood, which I like. The look is subtly different than the other approach. Because the wash works more as a stain, the grain (from the scalpel) is more visible. It's also easier to distress than the plastic.
The only real "challenge" with working with wood is that it does have a variable reaction to the stain. For example, where I had dug into the deck, the inner (or lower? Might by a plywood) layer didn't accept the stain much at all. As the wash dried, I added more to it several times to overcome the reddish-brown that was showing through in those large gashes.
There are also often sections or grain that is harder than the surrounding wood and doesn't accept the stain well. The imperfection spans several "boards" because the deck is a single piece, and partially cut to look like separate boards. You can see two diagonal lines across several of the boards. I was able to address most of the places this was evident with distressing, sanding, etc. But not entirely. Imperfections are good, because that's normal, but these look unnatural the way to cut across several boards, especially as two parallel lines. In the photos above you can pick up a "U" shaped imperfection as well. 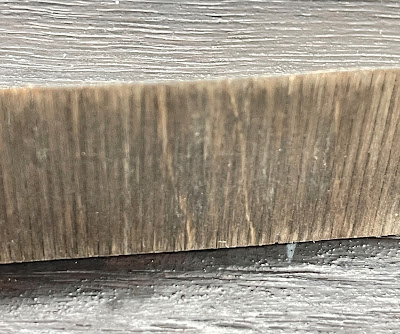 The picture is a little blurry because I had to take it at an angle to accentuate the effect. I think it is more pronounced in person because it's not just that they didn't accept the stain as well, but they reflect the light differently. Picky perhaps, but it's noticeable to me and I'll try to minimize the issue.
I can't say that I really prefer working with one over the other as I've been quite happy with the finished effect in either case. They just require a slightly different approach.
Posted by Randy at 11:21 AM