One of the things that's often forgotten in layout design is storage. Yes, most have storage under the layout, but good storage requires some thought and design. I'm used to this since we live in a fairly small house, but once you start filling the basement with a layout you also eliminate a lot of potential storage.

In addition to below the layout, there is also useable space on the walls above staging. It's also conveniently well lit, and is perfect for small items like paint.

Since I had previously determined that storing Vallejo paints upside down was not a good approach, I picked up some shelves designed for nail polish: 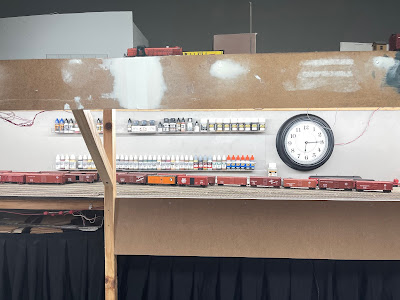 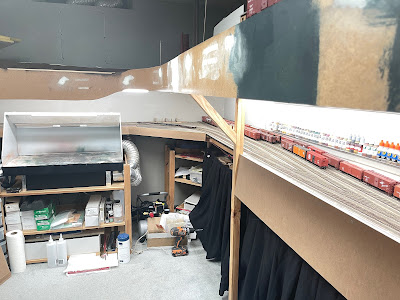 They were inexpensive, and since they are relatively deep they fit a number of different types of paint bottles. They are also deep enough to fit two Vallejo/AK Interactive/MIG 17 ml bottles, so when I'm running low and order a fresh bottle of a color there is room for that without taking more horizontal space.

The next question was what order should I store them. If you're not familiar with Vallejo, AK Interactive, or similar paints, each is assigned a number. For example, 70.819 is Iraqi Sand, and 70.822 is German C(amouflage) Black Brown. The colors aren't numbered in a color order. In other words, there isn't a block that is all greens. I could organize them by colors, but I decided numerically will work best because I note the number in my lists for mixing formulas, or which color I used for a particular project. So it will be easier to find that way. In addition, it's easier for quickly checking if I have a particular color.

I didn't want all of the paint stored at the desk itself, primarily for appearances since it's the Agent's desk too.

I'll need more shelves. I could easily fit a middle row, but for now wanted the space for taller bottles. Now that I've tested them, I'll get enough for the entire wall. I'm estimating that with two rows I'll be able to fit about 344 bottles of paint. A third row would add another 172, but I don't think I'll need that...yet.