Practicing with the Airbrush

I guess it's not all practice since I actually painted something...

I've only done a little airbrushing over the years, so I understand the process, but am not that comfortable yet painting an actual model. In the end, though, I did paint the NH 36' flat car.

I started with some spare Branchline passenger car sides as well as just trying some painting techniques on a box. The car sides weren't being painted for anything in particular, nor did I try to match any particular color.

I later mixed up a "grimy black" color for the flat car, and also tried some very fine dustings on a spare reefer body. I generally prefer to paint with straight black, then weather, but I didn't have black Model Air yet, and I wanted to start with the "airbrush ready" paints. Plus I want to see how starting with a grimy black as the base will work for me. 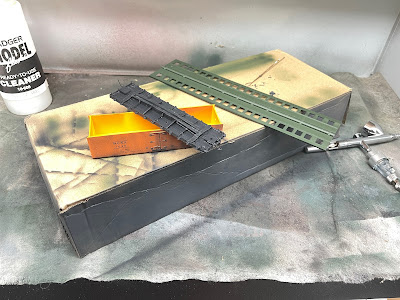 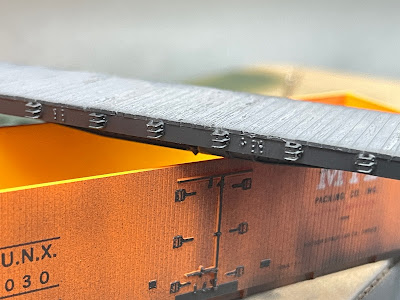 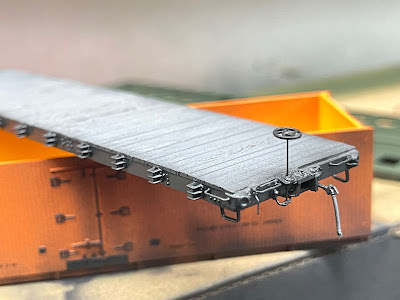 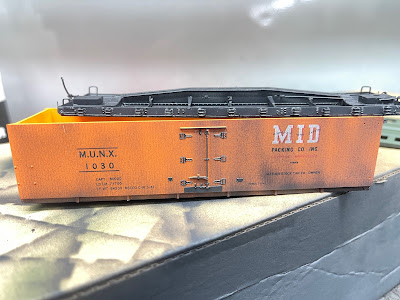 Not a whole lot to look at here, but I can share some things that helped me.
I have an Iwata Eclipse HP-CS Gravity Feed Double-Action airbrush. I went this route after I saw a clinic by Scotty Mason and how easy it is to clean a gravity fed airbrush - after you finish the color, run cleaner through it, put some cleaner in the cup, scrub out with a paper towel, then a little more cleaner to spray through to verify it runs clear and you're ready for the next color.

(by somebody who hasn't used solvent-based much)
After working with various paints recently, the biggest difference I've noticed between acrylics and solvent-based paints is that acrylics dry very fast. I was wondering if this would be an issue airbrushing and cleaning the brush. The only issue I had (which I figured out afterwards) is that it can dry a little on the tip, and it causes a splatter when you first start painting again. I don't know if this is less common with solvent paints, but the important thing is to clear the tip away from what you're painting first, especially if you set the brush aside for a moment.
I've heard that this is a bigger issue for folks used to solvent-based paints, but for me it's just part of learning how to use the airbrush.

I was mixing paint in the cup. This included just thinning, as well as mixing some black into the gray I had to make it darker. I found it worked better if you added thinner (or the thinner paint) first, but overall I suspect I'd be better mixing paint prior to putting it into the airbrush.

This also highlighted the biggest issue I think I'm having - getting the right consistency. The Model Air paints are supposed to be ready to airbrush out of the bottle, but I've seen it recommended that it be the consistency of skim milk and not all of the paint came out that thin. This is something that will just take practice to get a good feel of what works for me. I definitely had some that was too thin in addition to too thick.

Another aspect that will be entirely by feel is the air pressure. I was somewhere between 20 and 35 psi, as I tried several. All worked, but I think I preferred a lower setting. The few times I've airbrushed, I seemed to run out of paint very quickly, often with a visible cloud. I attribute that to too much air. Just a guess, but I didn't have that issue this time. In fact, I ended up painting the box largely because I had too much of the black.

There were times where I wasn't sure much was coming out, and also times where I noticed that I was very close, and reminded myself to brush from further back. Which led me to do what I should have done to start - experiment on the box.
As it turns out, you can get very close to the model, but that will paint a finer line. That will be useful for some things. But the 6-12" is about right for a broad area. What was also very interesting was seeing how long it took to "fill in" an area you were painting if you left the airbrush on a single spot. Then I worked on some patterns, and filling in across the box evenly. I also experimented with density, for getting that fine dusting along with full coverage.
I found the double-action relatively easy to use, and very flexible. It allows you to vary the paint flow, while a single action has one flow setting (which is sometimes adjustable, but typically not while using it).
Unfortunately, it was hurting my hand/wrist, which is an issue I have from time-to-time with other activities. With some focus on relaxing, and adjusting my grip it was OK. But it also leads me to consider getting a single-action airbrush for painting that doesn't require the flexibility of the double-action (such as painting a car side, or a light dusting for weathering).
I'm sure I'll have a lot more insight as I practice more, but it was nice to paint a model with the airbrush rather than a spray can.
I'm also finding that a lot of the painting comes out with a flat finish. Since I'm very comfortable working with Future Floor Finish, I'm not concerned as to whether I get a gloss finish or not for decals.

So now that the flat car is painted, do I decal it first, then paint the deck, or do the deck first? We'll see!

Email ThisBlogThis!Share to TwitterShare to FacebookShare to Pinterest
Labels: Airbrushing/Painting