More projects I started quite a while ago. These are two interesting models that are only available as kits, produced decades apart, but are both very accurate models of their prototypes. This post has been sitting in my drafts for well over a year, but as I've been reorganizing things in the basement, I've pulled these cars to add to the growing number of flat cars to finish...

A very well designed model, mostly styrene except the brake wheel (yet to be added), sill steps, and roping staples which are cast brass. The car is well weighted beneath a thin piece of styrene, and the brake appliances and crossties are designed to take this loss of depth into account. While there are holes drilled for piping between the AB valve and the center sill, it's very close to the false floor/bottom of the side sills and won't be easily visible from the side, so I've decided not to add them at this time.

I still need to add uncoupling levers, the brake wheel, and then paint and decal it.

My only tips on constructing the model is to read the instructions carefully - it instructs you to not glue the center portion (over the weights) of the center sill until you install the crossties. I had already done that, so the crossties are slightly short. However, there are spacers that connect the two halves of the side sill together, and at least the lower ones would not reach each other had I done that and spread the center sill to accommodate them.

Also, the picture wasn't entirely clear on which slots on the underframe to use to install the center sill. It's the inner two slots, although in the instructions it appears to be the outer ones.
There's little point in me detailing the process more, since Jason Hill has covered the model and it's uses many times over on his blog here, here, and here, among others. (Jason is the designer and producer of this excellent model, so he knows it inside and out).

The second is a Central Valley Model Works NP flat car. The kit is very well detailed and well designed, but does not include a weight, or any accommodation for one. The brake gear is quite complete, if largely one-dimensional since it's all molded into the underframe. That's OK, though, because it's also completely invisible when on the track due to the deep fishbelly side sills. This is probably the only real "issue" with the model.

This is a really unique looking flat car, apparently constructed using old box car underframes c1931. Unfortunately, I haven't been able to find any additional information about these cars online. While a great number of plans are on the NPRHA website, this isn't one of them. I really like the deep fishbelly side sill, which angle slightly inward, and the uneven stake pocket arrangement.
The instructions were a bit vague, and it took some work to understand the placement of the triangular gussets. The gussets themselves don't always line up properly with the slots on the side sill and the crossbearers and crossties if you install them square, although that might have just been me. Again, not really a problem since it's only visible if you turn the car over.
Wire grab irons are provided with the kit, with two short and 4 long straight grabs, but it wasn't clear where they should be installed.
What I needed to find was a better picture of the arrangement of the end - grab irons, uncoupling levers, etc. Craig Bass has a great site of railroad photos he has taken from the '70s to today, and happened to have come across one of these cars. Both of these photos are extremely helpful. 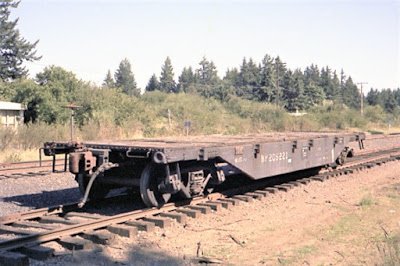 This photo shows the B-end arrangement, with simple uncoupling lever and drop grab irons on the right of the end. I can't make out the one on the left side, nor can I determine where the retainer valve is. Despite this photo being from the '70s(?) or later is the condition of the deck. It's worn, but it's not falling apart. 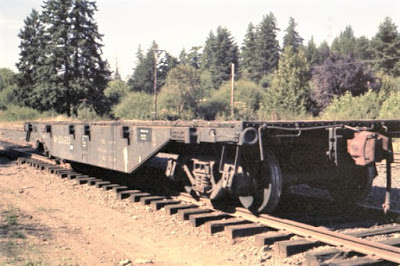 The other end is similar, but even more interesting is that the grab iron at the right end of the side is a hybrid drop/straight grab iron. Also note the release rod extended out of the side right about at the middle of the car.
There's another photo taken by John Hill in 1976, and it is still in use, although perhaps in MOW service. It's clear that both grab irons are drop grabs in this photo.

Here's the half-drop grab.
Fabricating it was pretty easy.
I started with a straight bend at the end of a piece of .010" phosphor bronze wire: 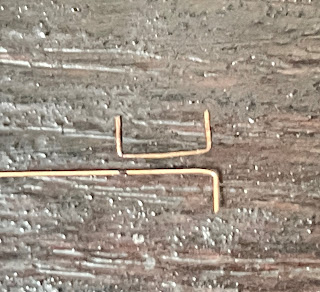 After measuring it next to another grab iron I marked it with a Sharpie
and bent it on a perpendicular plane to make the vertical ("drop") portion: 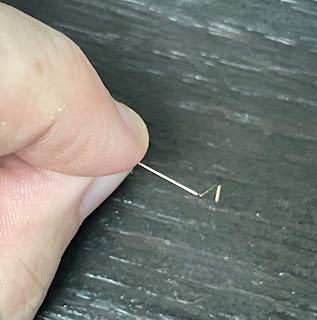 Then I bent it parallel with the original leg: 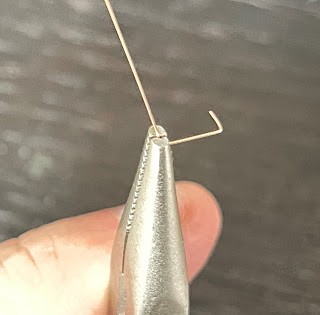 The height of the vertical leg was eyeballed, after a while you get a feel for what looks right.
The model looks great, and is a bargain too. Two cars for $12.95, so I gave one to Chris to build.