As I continue working through my freight car notes, here's another model worth having.
It should be no secret by now that I love interesting freight cars. Single sheathed cars are one of my favorites in general. The Mather single sheathed box car certainly fits that category.

I find this one of the most unlikely models to have been released as injection-molded plastic. Life-Like produced the stock car first, in single- and double-deck versions, and the roof and underframe could be shared with this model. I've always found it difficult to find the box car model, but the stock car is one of the easiest models to find, with way too many having been produced. I still find NOS for $5/kit for the stock cars. The execution is excellent for both, though. Red Caboose produced a model of the Mather reefers. 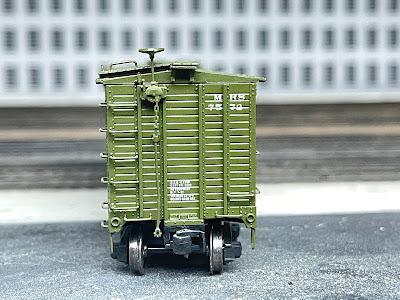 Only the uncoupling levers and air hoses are missing from the model.
Note the unusual Klasing horizontal power hand brake. 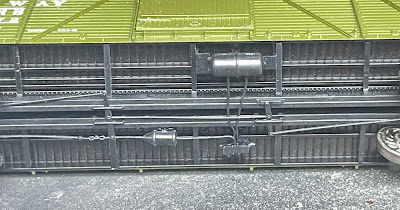 Underbody detail is good, including brackets for the reservoirs, instead of just a mounting post.
Richard Hendrickson covered the Mather box cars in Railmodel Journal in August, 2003.
The reason this box car is such an odd choice for an injection-molded model is that it existed in very small quantities, and mostly on very small roads. How few? It covers a prototype that totaled fewer than 1,000 cars, for about a half-dozen roads, mostly very small roads.
The prototype was built in several different heights. Sunshine produced resin kits in four of those heights: 7'8" interior height, 8'5" IH, 9'11" IH, and 10'3" IH. The Proto 2000 (now Walthers) model is of the shortest, the 7'8" IH. Unlike many articles in RMJ, there is no full roster provided, and the article doesn't cover the different heights. I'm sure that a big selling point for the model was the chrome yellow paint scheme of a couple of roads, particularly the Muncie & Western (MWR), with the iconic mason jar stenciled on the door, and "The Ball Line" slogan. However, all of their cars were nearly a foot or more than two feet taller than the model, so it's a stand-in if you're picky (like me). 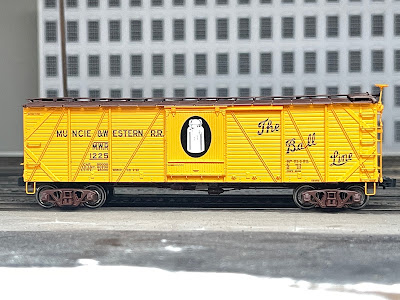 The iconic "The Ball Line" scheme.
Because these cars were leased, the roads that rostered them varied over the years, which makes it difficult to develop a complete roster. This may be why one wasn't included in the magazine. These are all the cars I could identify in 1950.
Although they existed in small quantities, they did show up across the country. They are a distinct design, one of the few accurate single sheathed box cars in plastic. It doesn't hurt that several have unique paint schemes. I think it's definitely worth owning a few, so they can show up periodically in ops sessions, but it's not always the same one. 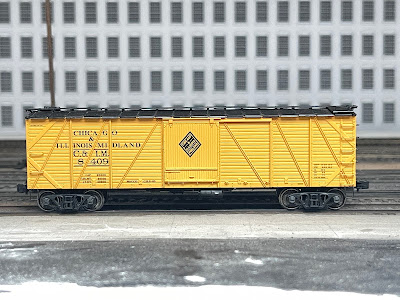 The colorful paint schemes on some of these cars and short stature make these cars stand out. 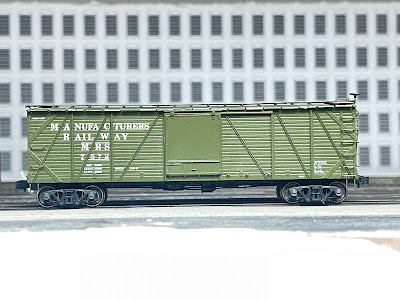 Wichita Northwestern, another road that leased cars earlier than my era, was also painted in the catchy chrome yellow, but not all had the unusual paint schemes of these four roads. The remaining cars had box car red bodies with white lettering.

In the article Richard notes the East St. Louis Junction had 32 cars in 1947 (its entire fleet). In the 1943 ORER, cars 5000-5099 (15) were 7'6"IH. They are listed in the 1950 ORER, but have no freight cars.
PS&N was another road that leased them, but the railroad ceased operations in 1947.
So the model is accurate for 737 cars in 1950, and not many more even in earlier eras. But other than MWR and TC, it covers all of the roads that were significant owners of the car. Two other classes are much larger on ACY, but at least you can represent a part of their Mather fleet accurately.

Nearly a foot taller. If I were to pick up a Sunshine kit or two to supplement the P2k model, it might be this version.
The other half of the TC box car roster were also unusual as 1937 AAR Standard box cars with Pullman Standard carbuilders' ends and a flat panel roof. I should have picked up the resin model when Smoky Mountain Model Works and later Wright Trak still had them. Hopefully Southbound Modelworks will re-release them.

More than 2 feet taller. Fewer than 50 cars, but for both of these roads, the only box cars they owned were Mather.

These are the most noticeably different from the P2k model being more than 2-1/2 feet(!) taller.

The unique Mather roof, also used on their stock cars and reefers.
Posted by Randy at 12:02 AM