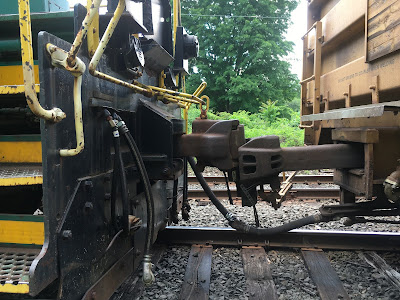 Even on the prototype, couplers may not match up. As long as it works... 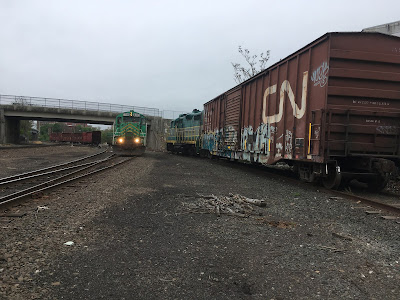 But his engineer said it must be, so they took it up and delivered it to Home Depot. A couple of days later, Home Depot told them it wasn't their car. As it turned out, it was for Hartford Lumber, an industry right at the junction, and one they have rarely had to spot a car.

When Dale had told me this, it confirmed that (most of ) the crew can often tell where a car is destined by the road/type of car. But there was something even more intriguing to me.

The Rules and Reality May Differ

It's a great example of how the crew will find what works best rather than just following the standards or the rules. Since the CNZR is usually a two-person crew, the engineer had told the office that it was stupid that Dale (the conductor) had to manage the paperwork, and record the time when each car was spotted or picked up, etc.

While Dale is the conductor, he's also the brakeman, fireman, and everything except the engineer. As a result, it's much more efficient for the engineer to be recording the necessary information on the paperwork while he's sitting there waiting for Dale to throw the iron, or set/release handbrakes, etc. So that's how they do it.

In my era, the conductor wouldn't be busy on the ground, since there would be a head-end brakeman and a rear brakeman to be on the ground. There's more leeway on a shortline railroad where everybody does a bit of everything. I've heard many similar stories from railroaders on larger roads as well.

The saga of the CN box car continues. After they were informed it wasn't for Home Depot, they had to take it back down to Hartford Lumber. As I mentioned, they rarely had to spot a car there. In the meantime, a shipping container had been shoved back against a chain link fence, which was pushed too close to the rail. So the car peeled away several yards of fence, which then needed to be cut out so they could spot the car. 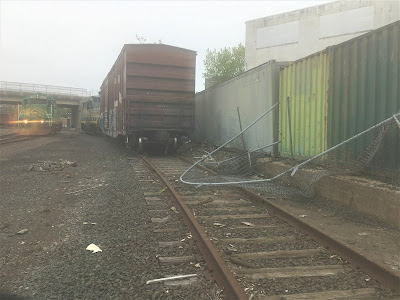 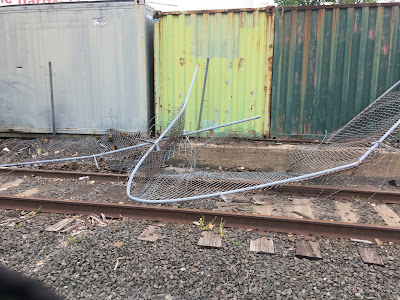 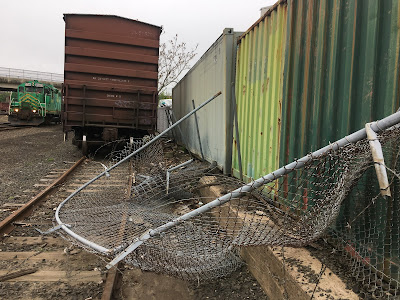 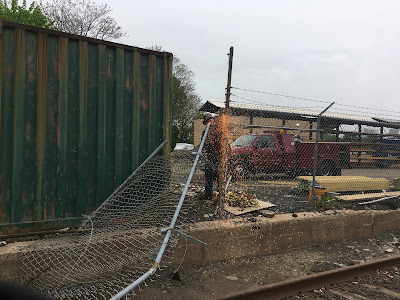 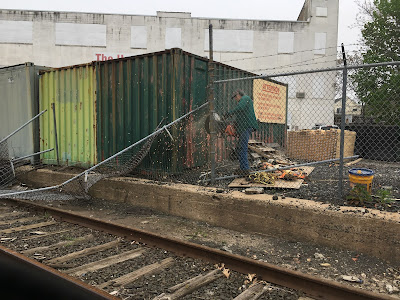 There was a day when I had stopped by and there was another car that was a bit of a problem. The day was busy, and there were more cars than fit on the runaround in Hartford. This presented its own problem, and I'll explain how the resolved it in a moment.
The reason there was too many cars is because Pan Am had made a mistake a couple of days before. The CNZR crew had left a car for CSOR, but Pan Am had picked it up. So on this morning, Pan Am, after realizing their mistake, had brought it back.
So because of this extra car, they had to determine how to deal with the fact that they essentially had no runaround. One option was to shove a car or two up the Hartford Lumber track. That would provide enough space for a runaround. But it also added a number of extra moves.
Instead, they decided to operated in a push-pull configuration. First I should point out that they planned out these moves before they even got on the locomotive for the day. When they went to pull the cars from Home Depot, they left one locomotive on the main, pulled the cars, and then had a locomotive on either end of the train.
This meant that when they got to Hartford, they could run the locomotive with the cut of outbound cars down one side of the runaround and hold. Then they uncoupled the rear locomotive and used that to pull the cut of cars that fouled the other end of the runaround. That allowed the lead locomotive to escape from the other end of the runaround, after they added the extra car to the cut of outbound cars. 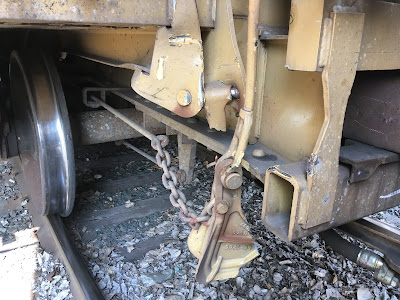 On another day, there was a box car that had a broken bell crank, which meant that you can't set the handbrake. Dale told called his office and CSOR and told them that he wouldn't accept the car until it was repaired. They wanted him to accept it and have it unloaded first, but he still refused and they had to fix it first. 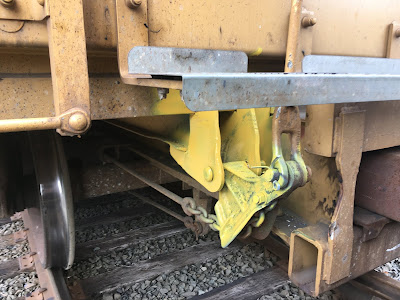 Here's the applicable rules from the 1943 New Haven Rule Book, under the section for Freight Conductors:

826. They must not handle a car which is found to be overloaded or improperly loaded or not in condition to run safely and report cars in such condition to the superintendent promptly.

This could be done on the model as well. I've seen some ops sessions that use cards to identify bad order cars for whatever reason. But on the prototype a cut of cars is walked to check for defects, set/release handbrakes, test the brakes, etc. On the model, the conductor should also be checking the train. If defects are found, issues with the coupler, damage to the handbrake, or things like broken sill steps, could be flagged as a bad order car and either refused or set out to be repaired. This would be useful for the layout owner, because they'll know which cars have broken parts

I enjoy this sort of operation since it provides some interest and work aside from just dropping off and picking up cars. It's more immersive, and also better models how the prototype actually operates. More importantly, it makes your crews a more integral part of the operations, and empowers them to make decisions and do the job like the real crews. Yes, there are rules to follow, and often a dispatcher or yardmaster who must provide permission to do the work. But once permission is granted, it's the crews that determine how to actually do their work.