On Friday I posted a list of plastic freight cars and mentioned that the Exactrail Rib Side car is the better option for the early Milwaukee Rib Side Box Car, but that it was hard to find. Today I received a notice that it a new run is coming soon. 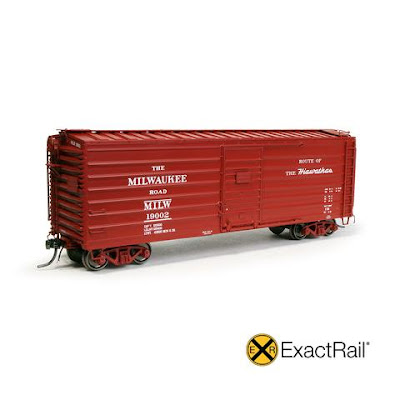 So let's take a closer look at this prototype and this model.

The Milwaukee Road built their unique welded "Rib Side" cars between 1937 and 1947. These were welded cars, using long panels arranged horizontally. The ribs were more than just a corrugation, and not hat-section (u-section) ribs attached to the side as many have thought in the past. Each sheet of steel was bent upwards enough for the next lower sheet to nest into the bend, and then the main portion of the rib corrugation provided stiffness. These panels were welded together along the bottom seam. Part of the reason for this type of construction was that the cars were built using Inland Hi-Steel. This steel was more corrosion resistant than the standard steel used in car construction, and was also lighter - an advertisement claimed as little as half the weight.

Other cars built with such lightweight construction had additional stiffeners, and corresponding rivets, between the main supports as seen in the so-called "Alternate Center Rivet" (ACR) car designs. Another approach was more panels (12-panel cars), and many used welded construction like these cars.

The end result for the Milwaukee cars was a unique signature design that is easy to spot in photos, even at an oblique angle. Chris and I have seen many on the NH, such as this one on the Valley Line.

The first cars built with this type of construction were 500 50' Automobile Cars built in 1937.

From 1939 to 1940 they constructed 3,188 40' Box Cars. All except for one of these cars featured "long ribs" that continued behind the ladders, and the "Type 1" Murphy double panel welded roof. These had 11 double panels, plus short end panels. The later roof used on cars built from 1941 to early 1947 had one fewer panel and wider end panels.

Rib Side Cars grouped the short-rib cars into four phases.

Accurail acquired the Rib Side Cars tooling, and have released a couple versions so far. Note that they identify their cars differently. They label their long-rib car as "Phase I" which means the short-rib cars, should they release them, will be Phases 2-5.

The 40' Double-door Automobile car was built only in the short-rib variation. In addition to the rib sides, they are unusual in that there is a removable center post between the two doors, making it appear as if it is a two-door box car, rather than a double-door car.

There are basically two designed for 50' cars in both single- and double-door configurations. A small number of cars with shorter interior heights were built as express or merchandise cars, I haven't included those here. Only the first group had the long ribs (and were the first rib side cars built).

In photos on the New Haven we've seen pictures of the 40' and 50' cars, and both the box and automobile cars.

There are other models that have been produced, but don't reach my level of accuracy and/or fidelity so I won't be including those.

The Sunshine kits, of course, are very good. There are a couple on eBay now, but they will typically sell for ~$75+. I don't own either, and while I've seen finished models I haven't studied them carefully.

The first model is the 13500-series of long-rib automobile cars. This is the only model available in this configuration, and I may eventually pick one up for that reason.

The second variation they produced is the long-rib box car, or the same as the Exactrail car, and also the long-rib Rib Side Cars model, which has since been released by Accurail.

The long-rib 40' cars were the largest group of cars. There are minor issues. The lumber door is the biggest one, it should be slightly recessed and it's lacking the rivets around it. It looks like it's a separate part, though, perhaps it can be modified.

The retainer valve is hanging in mid-air, the pipe should bend above the top of the upper corrugation and be mounted to the end of the car. The bottom of the pipe is also hanging in mid-air, instead of bending to go under the car. The Intermountain one is similar. The brake appliances are lacking some piping that is on the Intermountain car, and is a slightly different configuration. I don't have a diagram handy to verify which is correct.

In Railway Prototype Cyclopedia 13 it lists 164 car numbers confirmed to wear the "Route of the Electrified Olympian" slogan. All of them are long-rib cars. Six of the Exactrail cars will be released in this scheme (4 built in 1939, 2 in 1940. Of those 164 car number, 91 were built in 1940.

This is also very accurate and also must-have in my opinion since the shorter ribs are noticeably different than the earlier arrangement. The detail is perhaps slightly less fine than the Exactrail car, for example the intermediate corrugations on the Improved Dreadnaught End are a little narrow. And the handled the retainer valve in a manner similar to the Exactrail car as well. But overall it's very well done.

These models were originally produced by a company that only made Milwaukee Rib Side prototypes, and most of the variations are therefore available in plastic. Accurail has released two of the versions so far, and I don't think any modifications were made to the tooling.

The tooling design varies depending on the car. All are well done, although the roofs aren't quite as good as the Exactrail/Intermountain cars, and the details aren't as fine. The running boards are well detailed injection-molded plastic, but aren't see-through (Most of the Exactrail wooden running board is also not see-through, just in a couple of locations such as part of the lateral running boards).

The long-rib 40' car is the same as the Exactrail and Sunshine car. The few grab irons on the car are molded on. This is one variation to be re-released by Accurail, but the Exactrail car is better and RTR.

The short-rib car was produced in all four phases. They have an innovative approach to the bracket grabs on the left end of the sides, with the brackets molded on, and holes pre-drilled for wire grabs. Although the Intermountain tooling is a bit finer and has more details, there is one specific detail that the Rib Side Car models have that the Intermountain is lacking. There is a vertical line that should delineate the end of the ribbed portion of the car side where it is welded to the flat "pans" next to the door. Intermountain did get this vertical seam at the ends, but not by the doors for some reason.

The 40' Automobile Cars have molded grabs, and unlike all of their other models, the doors are cast into the car side. Brass models tended to attach the removable center post to one of the doors, so you could open one (but not the other since the post went with it).

The 50' cars, only the short-rib versions, are designed similarly to the 40'short-rib cars, except that the brackets for the grab irons at the left end don't stand free from the side, it's just the base and holes drilled for wire. The Improved Dreadnaught End main corrugations are a bit too "straight" and mostly lack the bulge in the center.

Here are some comparison pictures of the models I have. 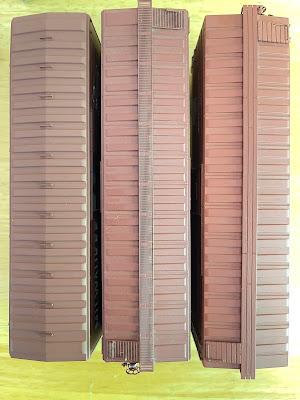 Roofs of the Rib Side Cars, Intermountain, and Exactrail models. 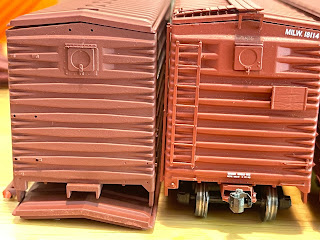 The Rib Side Cars lumber door on the left is better detailed than the Exactrail. 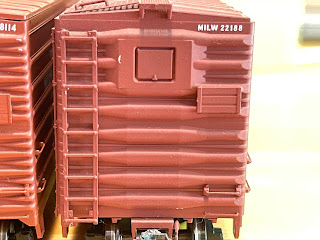 The Intermountain lumber door is a different design and a pretty good match to the prototype. 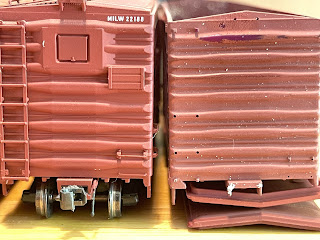 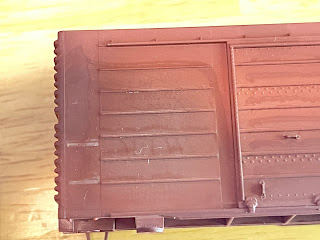 I already shaved off the molded on grab irons on the Automobile Car.
Ignore then in-process paint removal... 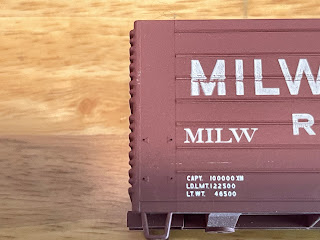 Both 50' cars have the same bracket grab base, with holes drilled for wire grab irons. 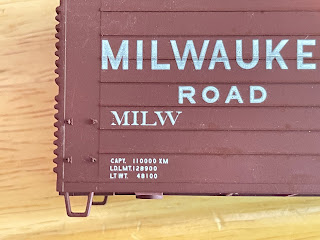 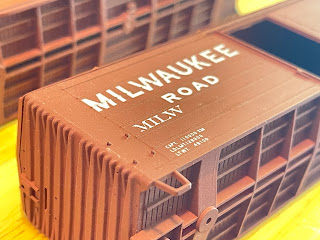 You can see how they extend from the car side.
This is an innovative and well done design.
As you can see I have several of the Rib Side Cars models, most in the wrong paint schemes, so I'm stripping them. They show up on eBay occasionally, but not that frequently and not always in the paint schemes I need. Hopefully Accurail will produce more of the variations that Rib Side Cars tooled. I have the 40' Automobile Car on the way, so that eliminates some of the work on that body.
Because these cars are so visible, I think having a couple makes sense since more than one may be on the layout during a given session.
Posted by Randy at 8:20 PM