In role playing games there's a (somewhat controversial) concept known as "fail forward." That is, when you are running a game, and the players fail to accomplish something, you should still provide forward progress to the narrative/story.

I've always been a procrastinator. That is, I'm often busy, but not necessarily busy doing what I should be doing. I have a difficult time sitting around doing nothing, such as lying out at the pool or beach when we're on vacation.

Lately this has been an issue because I haven't been getting much sleep. We don't have any nurses for Emily right now, which means we use baby monitor so we can sleep. I find it very difficult to fall asleep with the sound of her equipment (or her singing at 2:00 am), and I usually have to go downstairs at least a couple of times a night to respond to an alarm, which generally means she has disconnected something.

Anyway, it's all too easy to sit down where Laura is watching TV and not do much. In this case, it's less about being "lazy" and more about a lack of mental capacity and motivation. Young parents will know what I'm talking about....

Instead, I try to head down to the basement, put on some music, and look for something that will catch my interest enough to work on something.

I consider this "procrastinating forward." I'm not making progress on the projects I'm "supposed" to be working on, but I am making some sort of progress. This is what caught my attention last night.

I had purchased several undecorated reefers when Rapido did their first run, with the idea that I'd modify them into Armour and/or Swift prototypes. Bill had told me that there were only a few modifications to be made (I believe the Swift one might be a closer match). Last year I purchased a completed Sunshine model of an Armour Reefer by somebody thinning their herd, and decided to compare that to the Rapido car. 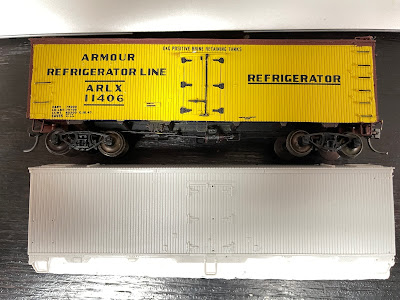 The most obvious detail that needs to be modified is the visible side sill, below the wood sheathing, but above the tabs that attach the sill to the underframe components.
There's a small steel strap that is the attachment of the ladder that needs to be removed, since it will have grab irons.
And there's the door. The GARX reefer has a taller door, but it's the bottom portion that's different. There's no kick plate below the door. This also affects the location of the hinges, which are also slightly different. 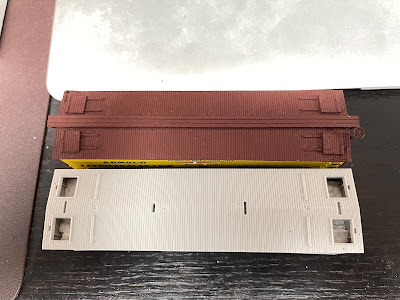 The roof is pretty straightforward. Just the hatch rests to remove. If you look closely, you'll notice the Rapido car is two roof boards longer than the Sunshine model. However, since resin can shrink when pulled from the mold, I don't know yet if they were actually different dimensions. 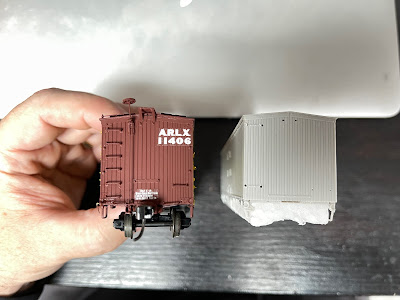 Not too much on the ends either. Another couple of ladder attachment straps, and a steel strap across the end of the car. 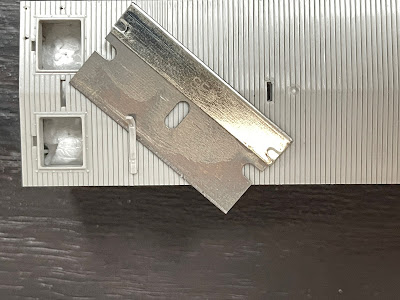 I started on the roof. I have a number of tools for scraping off details, along with the usual knives, etc. I've never been that good at this process, but this time I decided to use a straight edge razor blade. Something that Bill Welch said was his preferred method.
When there is enough space (that is, no other details to avoid) it works very well. Since you're putting pressure where the blade is cutting, the corners are far enough away that they don't dig into the car body. More importantly, with a long cutting surface, you can attack the detail properly - by slicing it.
Cooks will be able to tell you that the best way to use a knife is to let the blade do the work. Sharp edges like these work best when slicing, drawing the sharp edge along what you need to cut. When we use the No. 17 blade (or similar tool) approach, it is more like a chisel, and trying to wedge the blade under the part. I find this much harder to gauge the amount of force needed. Which means it slips a lot, gouges the side, etc. 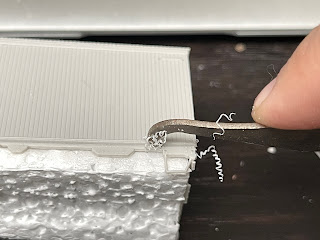 To take of the side sills, I started with a scalpel to mark the line, following the raised edge of the bottom of the side sheathing. (I still managed to gouge one of the sides). I then used a scribing tool to take more material out. This has a "v" shaped blade that cuts and clears the cut, instead of spreading the cut like a scalpel or knife does. You can see the little squigglies it makes while doing so (those might work well in a scrap load. Hmmm...). This clears a lot of material quickly, and then I can go back and use the scalpel to finish it off. 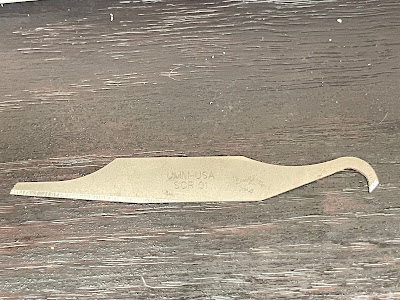 You can get this one from UMM-USA. I use it a lot. Because it's much thicker than a scalpel blade, it's not flexible. So I use the straight cutting portion to scrape things that need to be cleaned of flash, etc. 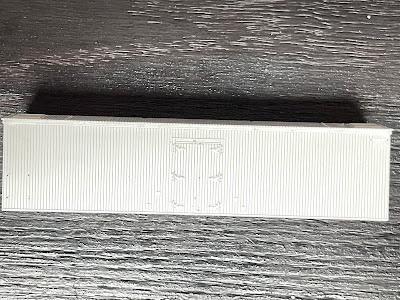 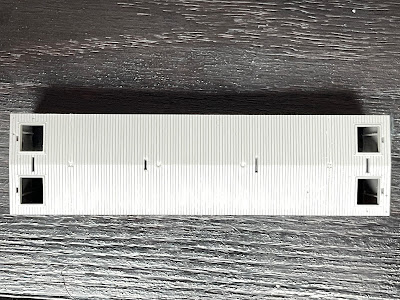 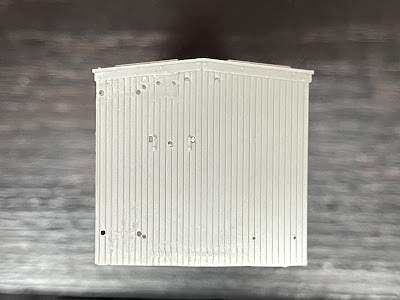 Overall not too bad. Using the scriber for the board lines made it relatively easy to match the other grooves.
This was as much a practice of these skills as it is working to complete a project. This isn't really even on my radar in terms of importance to complete right now. Note that I didn't even check prototype photos yet. Since I have a Sunshine model on the layout, I figured matching that would at least look consistent. Looking at prototype photos, it looks like I'll have to modify the door eventually. With door hardware available (Grandt Line, which is still easy to find) and everything else as scribed wood, it would be just as easy to scratch build this body. I'll try to modify the door first, but may try scratchbuilding one eventually as well.
Posted by Randy at 10:29 AM