In a recent post I included this photo and mentioned that something looked a bit odd: 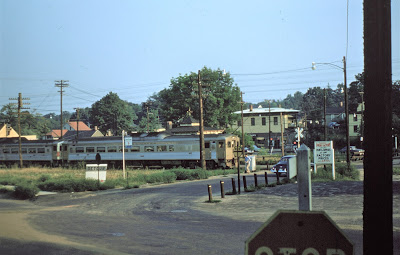 Two RDCs at Forestville in September 1956 (McNamara).
When I first saw the photo I thought it was Forestville. And sure enough, that's the notation on the photo as well. But when I looked closer, I questioned that, as something just doesn't look right. (You'd have to know Forestville to spot it.) 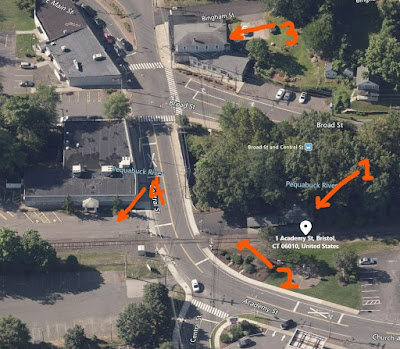 The current location of the station is No. 1, on the west side of Central St.

In the photo of the RDCs, the track (labeled No. 2) is between Tom McNamara (the photographer) and the station. The signs and lettering on the RDCs proves the photo is not reversed. In addition to the curve in the street, you can see the hip-roofed building (No. 3) in the background. Furthermore, if the photo was from the other direction, the Pequabuck River would be right in front of the station.

The station in Tom's photo looks like it's located where I've labeled No. 4 (on the east side of Central St). Tom was standing at the corner of Central St. (you can see the top of the stop sign).

Forestville is a neighborhood in Bristol that borders Plainville. In addition to the passenger station it's a village that is known for its clocks. Both the Sessions Clock Co, and E.N. Welch Manufacturing were to the east of the passenger station, adjacent to the Freight House.

I've oriented all of these maps and photos so they'll match Tom's photo. The train is westbound, so westbound (Waterbury) is to the right, Plainville to the left (east). 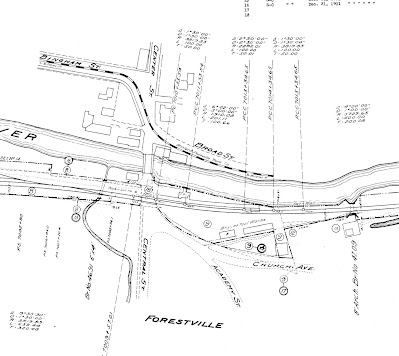 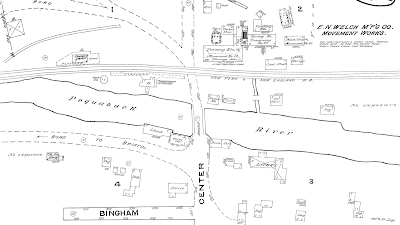 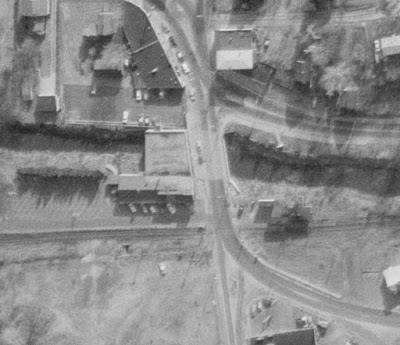 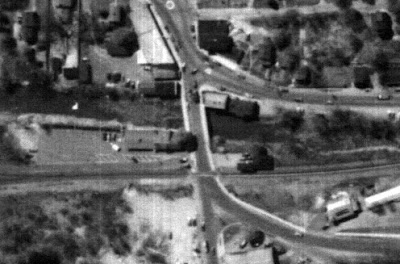 Another clue? The sign for Bristol Paint Factory. Although I can't find a listing for a company with that name in the 1956 City Directory, I do find Bristol Lacquer and Chemical Co. Their address?

29 Church Ave. Which is right at the corner of Church Ave and Central St. and would be to the right of Tom when he took the picture.

However, the relationship of some of the buildings beyond the station don't look quite right to my eye. The hip-roofed building isn't quite in the correct location.

Could this be a temporary bridge while they rebuild/repair the Central St. bridge? If so, Tom would be standing at the corner of Academy St. and Church Ave.

The proof is another building. At the very edge of the photo is a building with a sign that ends in "nny's." Sure enough, Johnny's Restaurant was at 164 Central St. It was just south of the railroad tracks, on the east side of Central St. (and the station was on the west side of Central St.) and just prior to the bridge.

Was the Central St. bridge damaged or washed out by the 1955 floods?

It certainly was. Here's a photo looking down Central St, with Johnny's on the left, and the station off the picture to the right. 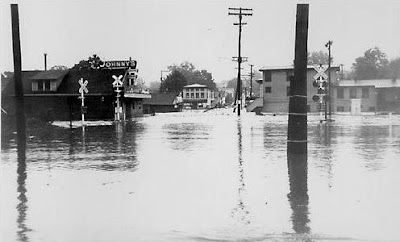 Dorothy McBrien, August 1955
You can see the grade crossing and Johnny's. The river is usually just past Johnny's.
There's a picture by George Cowles over at the Bristol Press showing the remains of the bridge.
Sometime after the flood, the temporary bridge was built and still in use in September, 1956 when the picture was taken by Tom.
Posted by Randy at 1:21 AM