As I've been working on operations, one question has been what sort of paperwork, if any, would I be using for Stanley Works? They won't have waybills, since those are created by the railroad and must go to the Freight Agent when delivered.

Since I have switching lists for the New Haven, I figured I'd use something similar for Stanley. I recently found something on eBay that shows I'm on the right track. 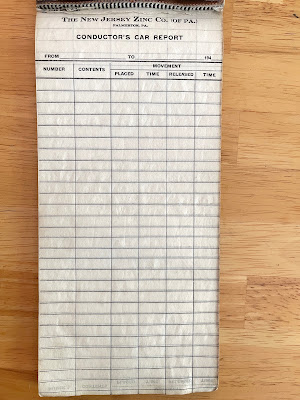 This is a booklet of Conductor Car Reports from an industry -  The New Jersey Zinc Co (of PA).
The booklet also had a time card: 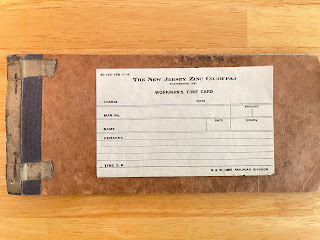 In the lower right of the time card it notes S&M Department Railroad Division. Presumably, based on the paperwork, this company has their own locomotives. 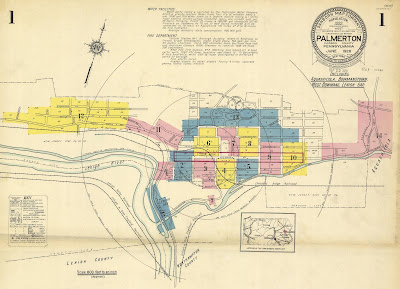 As this Sanborn map shows, the NJ Zinc Co was located along the Chestnut Ridge and Lehigh & New England Railroads. The CNJ (presumably the CRP in most of my era) looks like it may have served a plant at the other side of town. The Lehigh Valley was also across the river from this plant.
Here's a picture of part of the west plant: 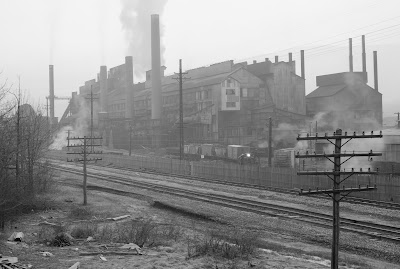 The town of Palmerton was a company town, built by the NJ Zinc Co (of PA) and named after it's president at the time (who apparently didn't like that).
The company was apparently the largest producer of zinc in my era, which is useful since Stanley Works has a galvanizing building at their main plant in New Britain. I can believe that, here's an aerial view of the west plant from 1931, looking east: 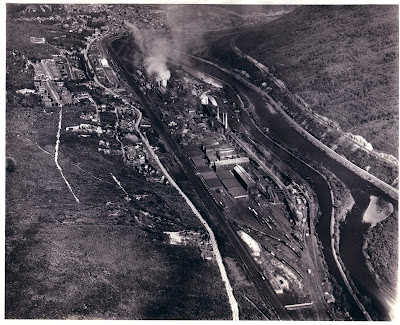 From what I understand, they had from 2 to 4 Alco S-2 switchers, which replaced earlier steam switchers. I believe they acquired them at the same time the Chestnut Ridge Railway received theirs.
It's clear that the west plant has a yard at the west end of this plant. The LNE has a direct connection to the east plant. In addition, the Chestnut Ridge Railway has connections to both.

This was a small short line that, according to a newspaper article, hauled 4 million tons of freight in 1947 and 1948. Their primary (only?) customer by that time was the NJ Zinc Co (of PA). It clearly connects to the LNE at the east plant in Palmerton. Another article notes that it was originally built with a connection to the CNJ for passenger, mail, and the primary freight commodity of bricks before the Zinc plant was built. Passenger service, as on so many branch lines, ended in the '30s.
Zinc and zinc products for New Britain can come via CRP/CNJ then by carfloat to the NH and to New Britain via Cedar Hill. A more direct routing would be LNE to Maybrook to New Britain.
In the aerial photo above, you can see the LV (lower tracks) and LNE (upper tracks) on the other side of the Lehigh River.
The Chestnut Ridge Railway crosses over the CNJ/CRP (on a bridge) in the upper left. Although not on the Sanborn map, I believe the tracks that come down the berm to the yard to the left of the CNJ Main is also the Chestnut Ridge Railway. The CNJ station is tucked up against the curve in that berm.
Right along the top edge of the photo you can see the LNE branch that's heading to the east plant.

It certainly looks like an interesting place to model, but what is of most interest to me is the paperwork.
The pages are perforated, several are missing, and it was clearly used because I may be able to figure out some info from the prior form since they had written with a heavy hand.
It would make sense that a company large enough to have their own locomotives would have their own railroad department. They would not only have to have an engineer, but also a yard foreman (conductor) and most likely a brakeman. In addition, they would needed a shop and crew to maintain their locomotive(s).  I don't know think they would fall under railroad union rules, but they would probably have operated much like any small railroad. 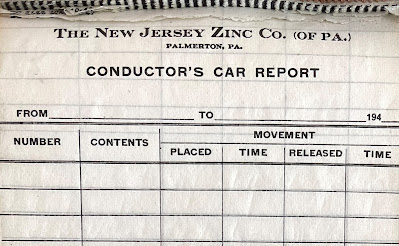 The Conductor's paperwork is simpler than the railroad's. All of the traffic to/from Stanley Works interchanges with the New Haven. The Agent will also serve as the Stanley Yardmaster. I'll create a similar Yard Check paper for Stanley Works. I'll also need some method to release those cars through the session, as they won't all be ready to pull at the start of the session.
These forms can be used as they are designed, and issued to the Stanley switching crew as needed, just as the New Haven switch lists are given to the crews throughout the session.
Posted by Randy at 5:31 PM