Don't be afraid to change...

Although this isn't a new subject on this blog, it's prompted by many questions I see online in forums and on Facebook. Something along the lines of, "I'm not sure I like something on my layout, should I change it?" Sometimes it's asking if they should start a new layout altogether.

The answer, of course, is one that can only be answered by that modeler, and it will also depend on what sort of modeler you are. My intention, of course, is to model something specific and as accurately as possible. When asked if I had double the space, what would I model then? The answer is, "New Britain, but better." So of any layout, you'd be reasonable in thinking that it is a pretty fixed and unchangeable thing.

Well, that was the idea, but it hasn't really turned out that way. Here's a picture to illustrate: 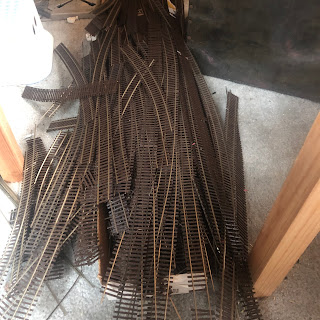 This is a box/pile of track that I just gave to Dale. It's all used Microengineering track, 99% Code 70, and much of it painted and even weathered. He'll only use the rail, for handlaying. I have at least 20 turnouts to go with it.
What is this track?
It's all track that I removed when making changes to the layout over the last few years. It doesn't flex well after it's been painted, and of course it was also cut and fit to specific locations, so I ended up just picking up new track here and there as I was making the modifications. It was going to be in the way during the recent work on the layout, so I decided to give it to Dale.
I've figured out recently that I've rebuilt probably 90% of the layout at least twice, and in some cases (like Stanley Works) 3 or even 4 times. Why?
In the case of New Britain Yard it was due to the ground cover drying with a white coating over everything. That hasn't otherwise changed.
Stanley Works was designed, and redesigned, several times to try to ensure that all of the tracks are there, and that they'll operate correctly, despite not being able to model it accurately in that space. So there were issues with the runaround placement initially. Then I found some more information and wanted to add some additional tracks. After operating we discovered a few challenges and rearranged the track to address those issues. Then I decided I needed more room for the background buildings and removed the backdrop, and make the opening for the helix smaller. Since I had found more information on the west side of town, and wanted to correct some other problems around Fafnir, I decided to pull up everything and redesign it. In the end, Stanley is much more accurately designed, and works much better.
And yesterday, I decided to rearrange one of the tracks, and remove another because I had learned it wasn't actually there in my era. (It's been surprisingly difficult to nail down the track arrangement here, since every map has been different).
On the east side of town, the modifications were to realign the mainline better, and after removing some backdrops I realized I could fit more of the industries. As it stands, there are only 2-3 industries that I wasn't able to include on the layout on that side of town now (including one I just learned about a couple of weeks ago). Far more than I originally fit.
In the end it comes down to one thing. What will make you happy? Will you be annoyed that some track arrangement isn't 'correct' in a few years? Is the track arrangement inhibiting operations? It could be an issue with scenery, really anything.
The point is, while we may have intentions to model something specific, that doesn't mean it's static. It's OK to change things if you feel they are necessary. Think it through, and then go with what makes the most sense. We change lots of other things in our lives (cars, homes, clothes, furniture, rearrange rooms, etc.), but sometimes we seem to get hung up on making changes on the layout. Yes, we've spent time and money getting it to where it is now. But that's OK. We've operated the layout and it worked well. Now it will work even better. I've improved my skills, learned new things, and the goals have grown/changed slightly. And this is a learn on the job type hobby.
The real truth is, I'll be able to tell you the best way to build a layout as soon as I've finished one. Until then, don't be surprised if there are more changes...
Posted by Randy at 10:04 AM