Here's a Kent Cochrane photo of I-4 class 1383 on Train 131 in New Britain. I have an original print with Tom McNamara's handwritten notes on the back. It's dated March, 1948. 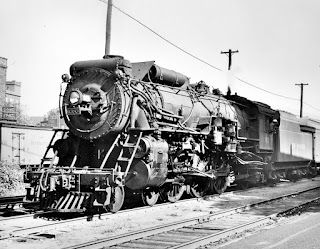 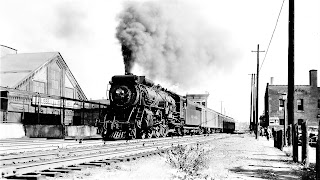 Note the RPO (only on 131/136 on the Highland), and the full skirts on the Pullman-Bradley coach.

So it can't be earlier than about June '46, and is clearly not early January 1948. With the second picture dated October 1947, and the fact that I-4s weren't regularly assigned power on the Highland Line, it is likely that both of these photos are from the same October day. The specific day was not recorded. The shadows and foliage (what little there is in the photos) is also similar.

I've heard that Tom had commented that Kent didn't keep great records, and it's possible that Tom's notations were added later. But it is fun working through these sorts of puzzles as I dig up more information (in this case while researching tenders for another project). I don't have engine assignments for 1947, but I know I-2 1331 was the final steam locomotive assigned to 131/136 in 1948. The I-4 is most likely filling in while the regular I-2 that is most likely assigned is in for repairs.