What else am I working on? Embassy Diner

A small but signature structure on the layout will be Embassy Diner. It's located next to the tracks on Main St. and is right at the front of the scene. It's a typical 'railroad car style' design, but there isn't a commercial model that will work here.

Despite its location, I don't have all that many pictures of the diner: 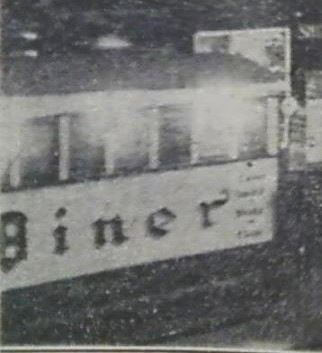 I think this one is from a little later (it's from a very low resolution photo):

They aren't great, but they are from a different angle than I have for others, and the second one shows the relationship to the crossing gate very well.

The next photo I have is from 1960. I don't know when the lettering on the side changed but I'll probably use this style. 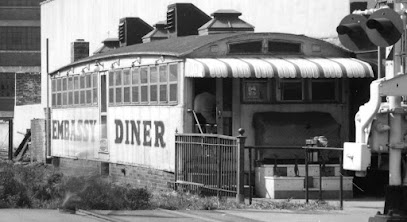 It's the best photo I have. Like the station, there's a shoeshine set up, but this conveniently has a cover so it will be pretty easy to model.

I don't have a date for this later photo, but the coloring has changed: 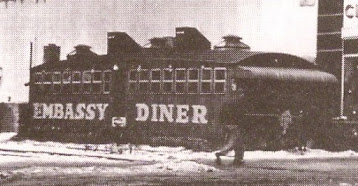 Although the crossing gates aren't visible, I'm pretty sure this is the last paint scheme it had based on this photo after it is abandoned: 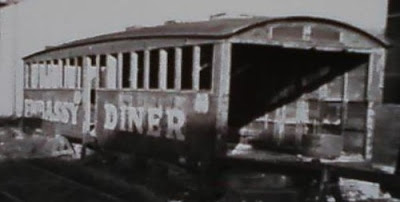 Again, I don't have a date, but it's past my era regardless. I don't know who the photographers were for any of the pictures.

Using the rough dimensions (40' x 10-12') from the Sanborn map, I decided to put together a sketch drawn to scale. I estimated other dimensions based on an 80" tall door on the side. 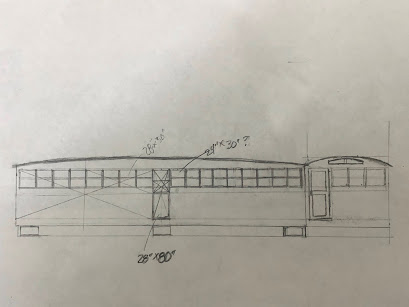 I thought the windows looked too square (and still do), so the ones on the right are 1mm narrower than the ones on the left. I then decided to play around with the trick of drawing an 'x' on the original drawing and this one. Although the perspective is different, the points where the lines cross will be in line on either. 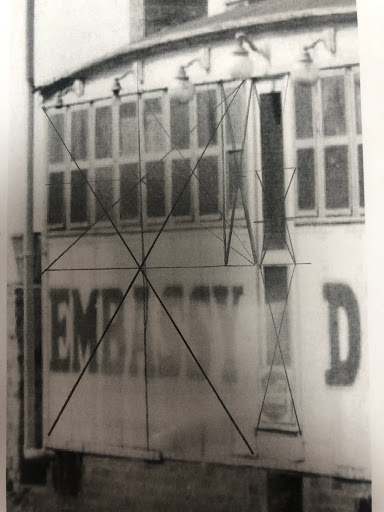 Despite my imprecision, the cross points pretty much line up where they should, which means my sketch should be pretty close to correct. Looking at the larger version of this picture, the bottom of the windows should be about shoulder height based on the figure walking in the door on the end. The 1930 photo shows the windows to be more square than they might look, but they still look like they should be a little narrower to my eye.

I estimated the windows to be the same width as the door, or perhaps slightly narrower. I made the door on the side 28" wide. Narrowing the windows 1mm more might make it look a little better and I may do that.

Based on the door height, it appears that the set of windows next to it is 80" wide. Also using that 80" measurement, I got an estimate of about 4.4" for each strip in the awning. That gives me an overall dimension of almost 11', which is a good match to the 10'-12' estimate I had based on the Sanborn Map.

So that's my sketch so far. It will be pretty easy to construct the basic building of styrene, although I may have one or two of my architectural experts double-check my math first. Although this is one of those situations where I may just eyeball some tweaks to make the windows more rectangular and the end a little wider. In theory, though, this should be pretty accurate. In the absence of other evidence, I'll probably put four windows on the far end (or make a blind end and one with windows). I think I may try the photographic paper for the cinder block foundation as well.

Now I just need to figure out what the colors were...so I asked on one of the New Britain Facebook groups. Naturally I got a bunch of answers. Pale yellow with red lettering or a variation was mentioned by several. A couple mentioned green lettering. White and Blue. Maroon and yellow.

Then I remembered it would probably show up in a Kent Cochrane video, c1953-6: 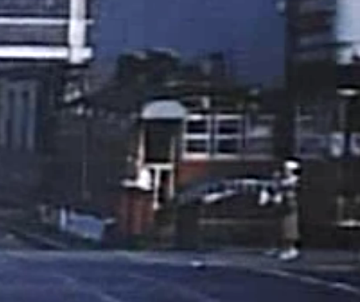 It's the only color reference I have and clearly a maroon red in color. While I don't have the exact date that the automatic gates with flashing lights were installed, the photo dated 1960 has them, and this is the older manual gates so this is clearly earlier.

Because of the photos of the building abandoned, I thought the darker color scheme was the last one.

A little more digging shows that in the 1955 Thomas Airviews photo it is a lighter color:

So it looks like this is the best photo I have for the appearance in my era: