Operating on the Prototype (CNZR) 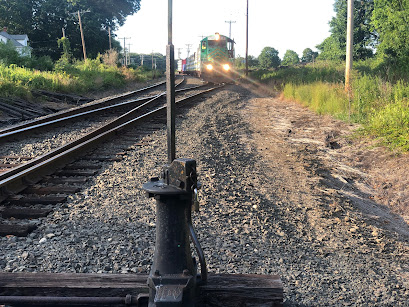 This is a picture I took while throwing the iron on the CNZR. I was in the area, and Dale said they were coming back to switch out Home Depot a second time when they finished switching out the Armory Line. It had been a busy day, so before I get to my part, here's what they had done already that day. Jeremy had just backed up onto the runaround to pick up a group of loads to take down to Depot.

The CNZR services one industry on the old New Haven Griffins line. The end of the line, just north of Day Hill Rd, is their engine servicing. Just south of Day Hill Rd is a runaround track: 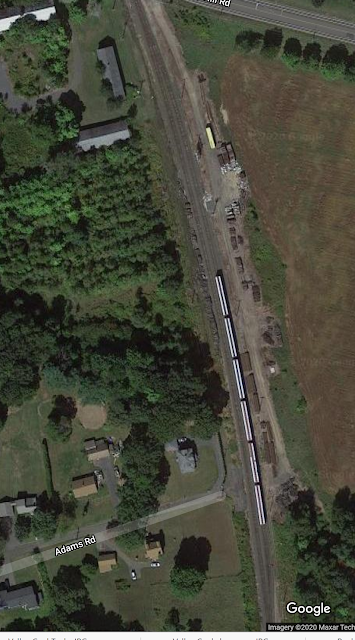 A little less than a mile south is the Home Depot distribution center: 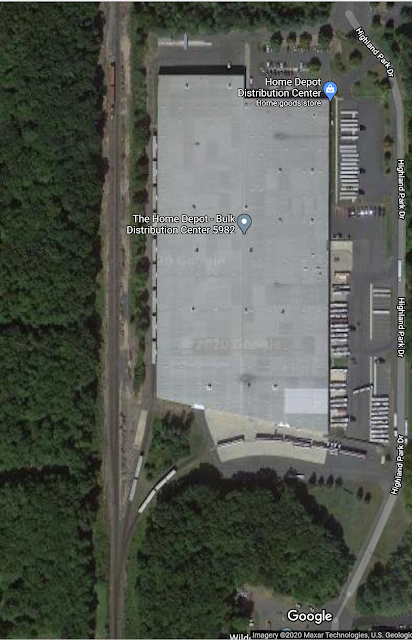 There is a storage track across the main, plus a box car track and a flat car track. They also service a single industry on the old Armory line, which is not connected to this line at all.

They interchange with Pan Am and Connecticut Southern (CSO) in Hartford. 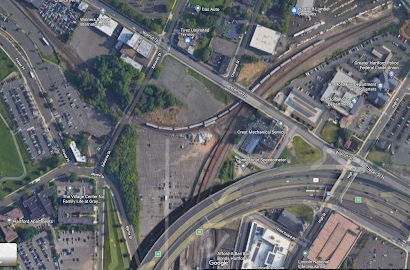 There is a long runaround that serves as the interchange track for CSO.

Off of the northern track is a side track for Hartford Lumber (I don't think this is in service, or if it is, it's not served by CNZR).

Off of the southern track is the 'station track.' previously the Highland mainline, now a stub-end track that serves as the interchange track with Pan Am.

The day started with:

The morning was spent switching out Home Depot:

Dale walked over 5 miles that day. This was a long day. Consider on a model railroad how long it often takes us to:

In many cases we do this very quickly because we don't consider the amount of work it takes on the ground to make those moves. We might pull the 5 flats and the 9 box cars at once, shoving the box cars together then immediately pulling them without any delay. Then pull the remaining flats, and spot the new ones, and then assemble our train and be ready to head to Hartford in less than 15 minutes of model railroading.

Once again I'll point out that people will say that fast clocks are problematic with a lot of switching because switching is 'real time.' But the reality is, it took us about 1 1/2 hours to deliver the 5 cars when I was there. For Jeremy and Dale it was at least a 10 hour day.

From a modeling standpoint, how can we address this? I think it's just a matter of keeping in mind that you have somebody on the ground doing the work. I don't think it's necessary to use a fixed amount of time for each move, nor do I think we'd want to do it at the speed the prototype actually does.

But remember to drop off your ground crew at the switch stand, and slow to pick them up when you're done. Remember to pause when hooking up the air, and releasing or setting handbrakes. Especially when modeling a modern era where the actual number of cars switched can be lower, it still takes a decent amount of time to do the switching. Sound-equipped locomotives enhances the experience, and I find makes it easier to move the locomotive more prototypically. I'm also a huge fan of the ProtoThrottle for this, and will be switching to those over time.

Another thing that I always notice is that they figure out exactly what their moves will be before they head out to do the work. As model railroaders we often wing it when working a local freight, as we go from town to town. Instead, if you're the conductor, take the time to go through your paperwork, and walk the line (if you're not that familiar with it) to figure out what your moves will be. In earlier eras you might not know if there's additional work at each town, but you will at least know what might be there and have plans for how you'll handle any additional work.

Something else that has become evident is that the industries have a lot of say over when and how they want their work completed. This has been a consistent theme whenever I look at the work on the CNZR and also my buddy Joseph at the Pioneer Valley Railroad. We can simulate this by providing additional work or instructions during our sessions, just like it happens on the prototype.

It also highlights how much railroading you could fit in a very small space, considering how much work it is to service a single industry if you're operating closer to the prototype.

The trick, of course, is also to keep it fun. We aren't actually going to work for the railroad, and we don't want it be work. My focus on operations is on creating an immersive experience. The idea is that you'll feel like you're actually working on the real railroad, without having to deal with what makes a job actual work.

We often spend a considerable amount of time making our models look as realistic as possible. With sound we enhance that experience even more, drawing us into the illusion. For decades we've worked with momentum to make it seem like the model is actually a massive locomotive hauling hundreds of tons of goods. That illusion is only enhanced by operating the trains themselves closer to the prototype. I also find that other aspects, like prototypical paperwork also add to the effect.

Another thing I'm adding to my list? More sound. I know I'll be adding resistors to my wheelsets for signaling purposes. Now I want to add other sounds that are missing from my miniature world: