Progress on the layout

Now that I've finished the DERS-2b locomotives, what's next?

My plan was to work on the cabooses needed for the NY/YN freights, and that is underway, as is work on the other locomotives I'll need for operations. But as Chris reported, he came by to help on the layout. The original plan was for him to come help me do feeders, but then Pete said he was available to come help as well. At the same time, I called Dick back to get caught up, and in the end the three of them came to help with a few projects.

Dick was there all day and helped me hang the door to the utility room, then he and Pete constructed the wall around the agent's desk so I could finish that space. In the meantime, Chris and I worked on a number of smaller projects (he injured his thumb at Bill's, making feeders more complicated), and putting together a plan of action to finish the room where Whiting Street Yard is.

That all got me in the position to move forward on these projects that have taken me far too long to finish.

So the room for Whiting Street yard has a door and sheetrock now. I also built the deck for the bulk tracks and I'm working on how best to build a swing/lift out to connect it to the yard: 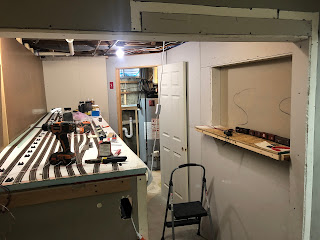 I need to tape it, and there's one piece of backdrop left to do. After that, Chris (and probably the others) will help with the drop ceiling. I suppose it should be painted too.
With Dick's help the door (courtesy of Dennis) is hung much better than if I were to do it myself. Not only does he know how to do it properly, but he's also good at actually doing it.
The wiring bus is in place for Whiting St Yard through staging and the bulk tracks. You'll see that I've already pulled feeders as well. I need to do the east and west side of town too (and glue down the track there), so it will be ready for Chris and I to do on another day.
Another dramatic change is the installation of lights (available at Amazon) that Bill found and are fantastic. You can connect up to eight of them, and I've got five across staging, plus one on either end: 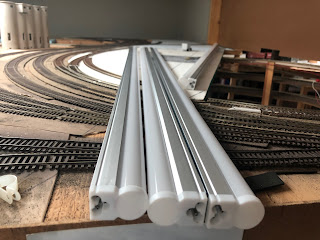 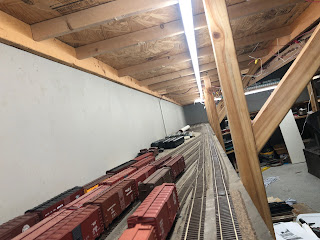 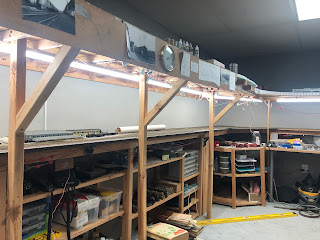 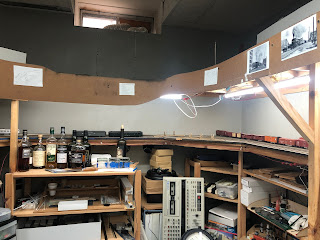 I need to tack up the wiring in a couple of places, but lighting is one of the projects that has been a sticking point for a long time and is really going to finish off the room. I'm working out the details as to how I'll install them on the upper deck.
The other dramatic change is the agent's desk. Unfortunately the desk I want is temporarily out of stock, but the 'office' is complete thanks to Dick and Pete: 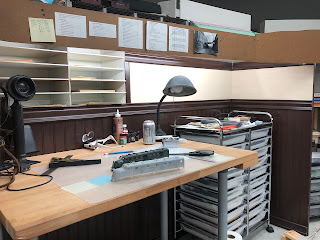 It's a 'simple' plywood wall (not so simple to build it around my benchwork...), with cheap wainscot that I spray painted. Dennis gave me a box of really nice wainscot (not quite enough for this location, plus most of it will be hidden by the desk) and I have a couple of possibilities of where that will end up.
The rolling cart is similar to one Chris has, and I'll need at least one more. It's full of freight cars and will eventually live under Whiting St Yard which is where I'll prepare trains for ops sessions.
These projects, along with the locomotives, cabooses, and also passenger cars, are all part of the push to get the layout not only ready for ops sessions (again), but to finalize the construction of the layout itself so I can focus on fine-tuning ops and build structures and scenery. I think I've spent enough time tweaking the layout.
So this is all time consuming, especially for me, but is making it feel like a new layout. It's also getting to the point where I can do a virtual layout tour soon.
Posted by Randy at 8:54 PM