I recently got a copy of an article called Passengers and trailer trucks ride the New Haven from the February, 1950 issue of Trains. 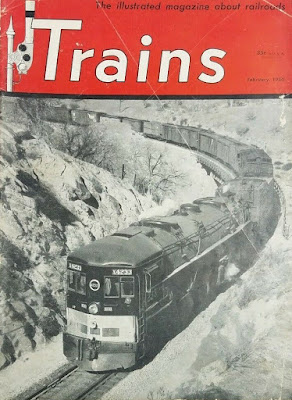 It's a 7 page article including pictures and includes quite a bit of interesting information. More than half of the article is regarding passenger traffic, and how the New Haven was (is, at the time) the only Class I railroad to show a profit from their passenger operations, depending on the calculation used. Even using the I.C.C. calculation which includes all expenses, including rents and taxes, they operate at a modest loss, but much less than any other road.

But about a page of the article talked about how the New Haven moves trailers on flat cars, which was still a new approach at the time. The New Haven wasn't the first, but it was close to it, starting their service in 1937. But what really caught my interest started with,

"I rode the caboose of a trailer train from Boston to New York one night..."

While the recollection of the trip itself is interesting, (37 trailers, on 25 flats on BH-1 which totaled 36 cars that night, hauled by DER-1-c/DL-109s 0740 and 0752, he was late for the trip because he had trouble locating the train in the yard, but the train was running at least 15 minutes late anyway, etc.), it's the operational information that can be pulled from the article that is of most interest to me.

Because they were late, they were switched to run on Track 2, the eastbound main (running westbound) so they "could run around the Extra which was somewhere down the line on Track 1. This gave me the chance to watch block signals working in reverse: as we passed them, the cleared from red to green, with a brief flash of yellow in between."

So I'll have to dig a little bit to see what sort of logic I'll need to put in place for the signals for running against the traffic.

"Conductor F.J. Fielding was busy at his desk in the front of the car, checking waybills and making a work sheet which showed at a glance just what would eventually happen to each of the cars on the train: drop a load at Readville, pick up 35 loads and 5 empties at Providence; take on 3 loads at New London and drop one off at Cedar Hill. That was the end of his run."

While the desk facing forward makes sense, I don't think they were turned on a regular basis. But the conductor writing out their own switch list from the waybills is quite interesting. The more I'm finding, the more I think that the conductor on a road job or local freight would write up their own impromptu switch list, which may or may not have used an official form. While within a switching district or yard limits, I think it was more likely handled by the agent, yardmaster, yard foreman, etc.

In any event, for model operations, I still like the idea of some sort of desk (rolling or permanent) for the crew to use to organize their work. Regardless of who is preparing the list, it's also pretty clear that it is done before they get to town. For example, in this article we read that they learned of additional work in Plainville before leaving New Britain. Which means the conductor could plan their work on the way, instead of not knowing what additional work they might have when they arrived. In this article, rather than receiving orders that were hooped up, they stopped and called ahead. I can also say that in my own experience on the CNZR, the crew has stopped and called the office for clarification or instructions on what to do. They also plan their moves ahead of time.

The main point here, is that if you are running a freight that will have work on the way, unless you are working a switching crew within yard limits, you'll have a plan on exactly what moves you'll need to make to finish your work in a town before you get there.

The article then talks about some of the complications of running late. They switched back to Track 1 at Readville, but were then slowed by Train No. 537, an except-Sunday local from Boston to Providence. They were able to pass the passenger train at Attleboro when it cut off its engine to pick up a couple of cars of express. It also started raining, which put them farther behind schedule.

I'm not sure why the rain itself slowed them down, but this is one of the most interesting tidbits:

"It had to wait up at Providence for three cars from UP-1, the New Bedford-Providence freight."

I've always been of the impression that such cars would simply make the next train. It doesn't indicate that they were hot cars, but it does become clear later in the article that this train doesn't meet the midnight deadline to get cars off of the road to avoid another day of per diem charges. So that may have something to do with it.

"The night fleet of passenger trains had crept up the rear and passed us. No. 181 had a 15-minute layover in New London, so BH-1 was stabbed while that mail and express train occupied the westbound main.

""The other side of the job" as Conductor Fielding called HB-2" was apparently also running late, passing at New London.

"We came to Cedar Hill Yard. Both the conductor and the flagman went to the front platform of the caboose. At precisely the right moment they uncoupled the car from the rest of the train. The train proceeded to the westbound classification yard, while Conductor Fielding dropped off of his rolling office and took his sheaf of waybills to the yardmaster's office. Flagman Patchelder braked his buggy to stop on the caboose track and hung out the yellow lantern which indicated he would sleep on the car that night."

They left Cedar Hill at 4:30 AM with 71 loads, no empties, with 3 motors (electric locomotives, type and road numbers are not noted). Just south of Bridgeport they had a hotbox 23 cars back and, "An hour went by while the train crawled slowly to the next siding and dropped the offending car. It was a bad spot for a set-off: an upgrade and with the last half of the train hidden around a curve. Engineer Horan, running blind as he backed to pick up the tail end, had to keep his speed down to a crawl."

They arrived at Harlem River three hours behind schedule.

I find a lot of interesting operational opportunities here. There have been a number of ways that modelers have tried to incorporate problems like a hotbox into their operations. I'm not sure how frequently something like that should happen. I think that they would be of most interest on a layout with long main line running. Having to slow to a crawl for however long it takes to get to the next siding would have the biggest impact on that type of layout. Even with a 4:1 fast clock, an hour is 15 minutes of real time, and that can have a real impact on the operation of a railroad.

What is much more common on a model railroad, though, are curves. Paying attention to what the engineer could see from the cab should affect how they operate the locomotive.

I also found the passage about kicking the caboose down the caboose track very interesting. And in a model railroad yard, having a caboose or two with a yellow lantern out also brings in prototypical operations.

I don't have the whole issue, but interestingly I noticed in the table of contents there is also an article on welded rail.